Posted on December 1, 2017 by Matt Hough
An exhausting sequel 3 Stars

A somewhat harried but also quite typical sequel to the frenzied Despicable Me franchise, Despicable Me 3 likely won’t let down too many of the series’ younger fans. Older admirers of the animated series may find it exhausting.

The third time is not the charm for Despicable Me 3, another sequel in Universal’s biggest box-office bonanza animated series: it’s loud and frenzied to the point of irritation despite pleasing voice performances. But this is what audiences seem to expect from this series, and this one, while not as successful as the previous entry at domestic turnstiles, still managed to round up its largest worldwide audience posting some astounding box-office figures.

Anti-Villain League star Gru (Steve Carell) manages to thwart child star-turned-adult bad guy Balthazar Bratt (Trey Parker) from stealing the world’s largest diamond, but when he doesn’t bring in the guilty man, he is summarily fired from the Anti-Villain League whereupon Gru’s loving wife Lucy (Kristen Wiig) also quits. Despondent over losing his job, Gru’s spirits are lifted when he learns from his surly mother (Julie Andrews) that he had a twin brother Dru (also Steve Carell) who now wants to make contact. Dru is a successful pig farmer in his home of Freedonia, but he longs to be taught the family business – villainy – and hopes Gru will be his mentor. Under the guise of teaching him the evil ropes of villainy, Gru goes after Bratt actually hoping to bring in his nemesis and recover the diamond which in Gru’s absence Bratt had no trouble stealing back and thus possibly winning back his job.

Screenwriters Cinco Paul and Ken Daurio have a bit of a juggling act with their script in order to service their main plot but also find time to accommodate audience favorites the Minions (voiced by Pierre Coffin) who not unexpectedly have their own plot set into motion by Gru’s firing. Their hope is to return to villainy with him, but when he refuses to do so, they up and leave him behind deciding to plot their own course of evil, barnstorming the hit TV show Sing! and performing their version of Gilbert and Sullivan’s “A Modern Major General.” Naturally, they’re all arrested, terrorize the prison, and must eventually accomplish a prison break (all of it noisy but fun), all of these actions set to familiar tunes by Michael Jackson, Van Halen, Pharrell Williams (naturally), and A-ha. Satire comes to the fore in the welcome presence of Trey Parker’s Balthazar Bratt who was a 1980s child star and, having grown out of his childhood into adulthood, can’t leave the ‘80s behind with his lengthy mullet (but with an age-creeping bald spot in full view), walrus mustache, shoulder pads, and parachute pants on full display taking revenge on a Hollywood who abandoned him when he entered adolescence. There is more than a bit of a sour underbelly to his story, and while his slick moves and inspired villainy are by far the movie’s brightest spots, there is enough subtextural bitterness to dissipate some of the hilarity. Overall, the movie jumps back and forth between its three plots (Gru’s daughters have their own stories including Agnes’ looking for a unicorn and Margo having her first taste of someone with a crush on her) rather haphazardly giving the film a loosey-goosey feeling that’s just shy of whiplash.

Steve Carell does manage to create two different but obvious siblings with Gru and Dru, and their eventual brotherly bond is rather sweet if wholly predictable. Kristen Wiig’s Lucy having her first experiences with motherhood might have been better handled (Miranda Cosgrove’s Margo offering to give her tips on parenting). Trey Parker steals the whole show as the embittered Balthazar Bratt, and his lair of gadgets and secret weapons remains the film’s most fun and creative element. Julie Andrews has only one scene as Gru’s unsentimental mom (might we get to see more of her in the inevitable sequel?), and Jenny Slate is very over-the-top as the new head of the AVL Valerie Da Vinci who gets rid of Gru and Lucy pronto.

The film’s 2.40:1 original theatrical ratio is faithfully delivered in this 2160p transfer using the HEVC codec. Brighter and with bolder, crisper color than its Blu-ray counterpart, this UHD transfer makes more than adequate use of HDR10 (Dolby Vision is also available for those with properly equipped TVs and players; my player hasn’t received the Dolby Vision update yet). There is no banding to be seen, and the entire animation experience with the crowd filled with characters of all sizes, shapes, colors, and conditions is really impressive. The movie has been divided into 20 chapters.

The DTS:X sound mix (my equipment decoded the lossless core for DTS-HD Master Audio 7.1) offers explosive sound design throughout. With lots of activity going on constantly in this ninety-minute movie, there’s rarely a moment when the available channels aren’t filled with activity. Dialogue has been routed mostly to the center channel with a random bit of directional placement here and there. The pop tunes from a variety of sources along with Heitor Pereira’s background score get routed through the fronts and rears expressively. So, too, are the atmospheric sounds which place the listener smack in the middle of the action at all times.

The Secret Life of Kyle (4:14, UHD, HD): available on both the UHD and Blu-ray discs, this mini-movie finds ferocious pet Kyle nursing his first crush on the neighborhood poodle.

All of the other bonus materials are contained on the closed Blu-ray Disc:

The Making of Despicable Me 3 (6:30, HD): producer Chris Meledandri, director Kyle Balda, writers Cinco Paul and Ken Daurio, and editor Claire Dodgson talk about their objectives for this third film in the series.

Developing Dru (4:13, HD): producer Chris Meledandri, director Kyle Balda, writers Cinco Paul and Ken Daurio, and actor Steve Carell talk about the character of Gru’s brother Dru and their aims for him in the picture.

Promo Trailers (HD): Winter Olympics on NBC, The Nut Job 2, All I Want for Christmas Is You, Pitch Perfect 3.

A somewhat harried but also quite typical sequel to the frenzied Despicable Me franchise, Despicable Me 3 likely won’t let down too many of the series’ younger fans. Older admirers of the animated series may find it exhausting. 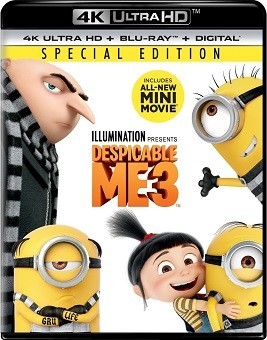