Forum List What's new Dark Style Change width
Log in Register
What's new Search
Menu
Log in
Register
Navigation
Install the app
More options
Dark Style
Close Menu
Posted on February 2, 2017 by Matt Hough
You are using an out of date browser. It may not display this or other websites correctly.
You should upgrade or use an alternative browser.
Simplistic cat-and-mouse thriller is purely popcorn fare. 3 Stars

A cat-and-mouse thriller with some ugly and unsettling political overtones, Jonas Cuaron’s Desierto achieves many of its obvious goals without delving very deeply into the motivations behind them.

A cat-and-mouse thriller with some ugly and unsettling political overtones, Jonas Cuaron’s Desierto achieves many of its obvious goals without delving very deeply into the motivations behind them. An unsparing, almost ethereal setting offers the opportunity for some breathless chases but without much of the winning ingenuity that a first-class thriller like The Most Dangerous Game offers.

When their truck breaks down miles from the U.S. border, fourteen migrants with their coyote Lobo (Marco Pérez) attempt to make their way across a dry, treacherous badland to the U.S. border. Sam (Jeffrey Dean Morgan), a rabbit hunter with his dog Tracker, spies the group of illegal immigrants after they’ve crossed through a rusted barbed wire fence marking the border and begins picking them off one at a time. A group of five who had straggled behind the main group aren’t immediately seen by Sam, but once he spots them, he and Tracker are hot on their trail, and it’s up to quasi-experienced Moises (Gael García Bernal), who has crossed the border before, to try to get the remaining few to safety.

Director Jonas Cuaron and his writing partner Mateo Garcia spent ten years scripting this saga and trying to raise the money and find the right locations for the shoot, but it’s a pity in all that time that more backstory and motivational depth wasn’t woven into the movie. Though we do get a bit of information about what is driving Moises and surviving female Adela (Alondra Hidalgo) to make this perilous journey, we’re never clear about why Sam is so driven to wipe out these human beings (the Confederate flag on his truck and a Tea Party/Minute Men flag on the back window offer some potential clues) without shedding even a tear: is he psychotic or is he driven by some twisted brand of patriotism or is he a hunter who’s graduated from rabbits to humans? Regardless, almost the entire movie is of the stalk-and-shoot variety, and director Cuaron (son of two-time Oscar winning director Alfonso Cuaron who also co-produced this movie) spares us none of the violence or heartlessness inherent in the story. The movie is beautiful to look at with its painterly sunrises and sunsets, majestic salt flats, deserts with spiky and twisting cacti proliferating (one of the most important points of the chase involves Moises taking refuge in an enormous cactus patch), and rocky formations of the most awe-inspiring shapes and sizes, and director Cuaron and his cinematographer Damian Garcia film in long shots and close-ups and from above and below to give the movie a great deal of visual variety.

The dangers are real, too, not just from the perilous rocky ledges the victims must traverse to make their escape but also from the desert’s natural perils, too: no water, excessive temperatures, and snake pits filled with rattlers. The narrative plotting breaks down on occasion: Tracker, who has heretofore shown an unrelenting drive to track and kill, all of sudden seems to lose his sense of smell and his rush to attack right when he’s within inches of the wounded surviving female Adela hiding behind an enormous cactus. Sam seems to have an unending supply of bullets for his high powered sniper rifle (we never once see him reload). And, the inevitable showdown between Sam and Moises doesn’t exploit Moises’ survival instincts enough; there is only one moment when he puts his smarts to work once he tires of being a victim and decides to go on the offensive.

While we never get under the skins of any of the three main characters, there is no denying the excellence of the very physical performances being offered here by Jeffrey Dean Morgan, Gael Garcia Bernal, and Alondra Hidalgo. It comes as no real surprise, I suppose, that separated from his gun and attack dog, Morgan’s Sam is a bit of a coward and a wimp, rather a clichéd handling of a driven and obviously troubled man. Bernal’s Moises jumps to and fro from the defensive to the offensive and then back again and, while completely capturing our sympathies, he doesn’t quite milk his desperation to return home to Oakland for all it’s worth. Hidalgo’s Adela likewise earns our sympathy early fighting off the obnoxious sexual advances of Ramiro (Oscar Flores) who had been hired to bring her safely to America (he’s the first victim of Tracker’s powerful jaws, a justifiable end to an evil character), but she fares less well than the men as the intensity of relentless flight begins to take its toll on her. Three dogs were hired to play the role of Tracker, and despite the character’s deadly pursuits, it’s hard not to admire the animal’s physical prowess and the sheer volume of admirable training that went into making him a notorious tracking and killing machine.

The gorgeous high definition transfer is framed at 1.85:1 and is presented in 1080p resolution using the AVC codec. Reference quality all the way, the textures of the rock formations, the cacti, and the sand as well as the facial features, hair, and clothes of the characters all are brought forth in great detail in the sterling visual clarity offered in this transfer (the first view of a rattlesnake inches away staring straight into the camera is as lifelike as anything being offered on home video in 1080p). Color is beautiful, too, with skin tones right on track. Black levels never cease to amaze with outstanding shadow detail in the few nighttime moments. All of the migrants speak Spanish, and the English subtitles are in white and are very easy to read. The movie has been divided into 20 chapters.

The DTS-HD Master Audio 5.1 sound mix might not be the last word in expansive soundtracks, but this one certainly gets the job done. Dialogue is relegated to the center channel while Woodkid’s highly percussive, stylized music score fits the movie quite appropriately and has been threaded through the fronts and rears with great attack. Split surround effects might not be as sophisticated as in more highly budgeted movies (the rifle shots don’t often pan through the soundstage as they make their ways to their targets), but what’s present is very effective.

Audio Commentary: writer-director Jonas Cuaron has a start-and-stop affair that spends too much time describing events on the screen. He does relate some anecdotes about the filming and explains the uniqueness of the locations, but it’s not a very edifying track.

With the subject of immigrant migration constantly in the news, that facet of Desierto never becomes a major issue in this simplistic stalk and shoot chase picture. For a popcorn thriller, it’s slightly above average, and action fans will likely opt for a rental with this title. 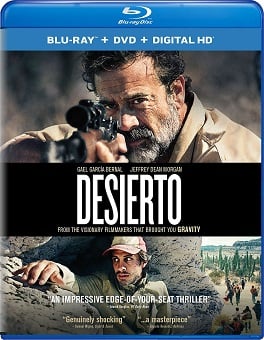