In December of last year Denon announced the imminent arrival of a new entry-level 2.1 sound bar, the DHT-S216. Retailing at $249 the S216 forms part of an extended family of DHT- models with the S716H topping the list on performance but with a corresponding $899 price tag. With that said, the budget S216 is adorned with some nifty features including DTS Virtual:X and Bluetooth connectivity for playing your tunes.

The 3.4kg (7.5lb) DHT-S216 is a sleek and well-built unit with a matte black textured body, which can be mounted on a wall or directly on your TV shelf. A neat grille wraps over the front fascia beneath which lie two 1.75-inch forward-facing midrange drivers and another two 1-inch forward-facing tweeters at the outer extremes of the cabinet. A further two 3-inch subwoofer drivers for added bass response, meanwhile, point downwards. The bar measures 89cm in length and a mere 6cm (2.4 inches) in height, making it a perfect companion for placement under your 55- or 60-inch display. The low rise of the S216 means that the chances of blocking line-of-sight remote control with your TV are minimized.

The remote itself is a small palm-sized affair allowing easy access to sound modes, volume and bass controls, dialog enhancement levels, DTS Virtual:X activation and Bluetooth pairing. Listening modes comprise Movie, Night, Music and Pure, the last of which by-passes any signal processing for clean reproduction of the source. In the absence of the remote, the five buttons on top of the unit also control power, input selection, volume up and down and Bluetooth.

A welcome feature of the sound bar is Denon’s generous in-box inclusion of everything you’ll need for quick setup, namely a wall mount template and spacers, power cord, HDMI cable, optical cable, remote and batteries. HDMI ARC capability means you can quickly get your respective TV and bar shaking hands, while connecting your Blu-ray player or other source directly to the HDMI input. The ARC function also means you can instantly control volume directly from your existing TV remote. For those without ARC display compatibility, the optical cable will carry a Dolby Digital or DTS 5.1 signal for downmix direct to the included input. Connectivity on the rear inset panel is augmented by a 3.5mm audio input, a USB service port and RCA connector for external subwoofer.

There is no on-screen display function, but five white LED lights beneath the cloth grille indicate volume intensity, as well as input sources. A helpful blue LED light signals Bluetooth pairing (flashing) and operation (constant), while green and amber diodes designate Dolby and DTS audio sources respectively. There is a noticeable delay of a few seconds before your display and DHT-S216 start to talk over HDMI, and it’s worth turning volume down on whichever remote you’re using when switching inputs; recorded levels can vary greatly between, say, Netflix and broadcast television.

With Movie set as the default audio mode, it was clear while watching regular TV program content – in this case news and sports – that there was a marked uptick over using the in-built Samsung speakers in my 55-inch display. The S216 lends midrange weight to effects and a more full-bodied soundscape to musical passages. These qualities improved further when I tried the Pure mode as this appeared to add some authority to spoken voices too, and therefore became my preferred TV watching setting. However, it was somewhat disappointing not to perceive much of a change in the sense of soundstage width in either mode, which I had hoped would be one of the most obvious improvements over the TV’s audio. 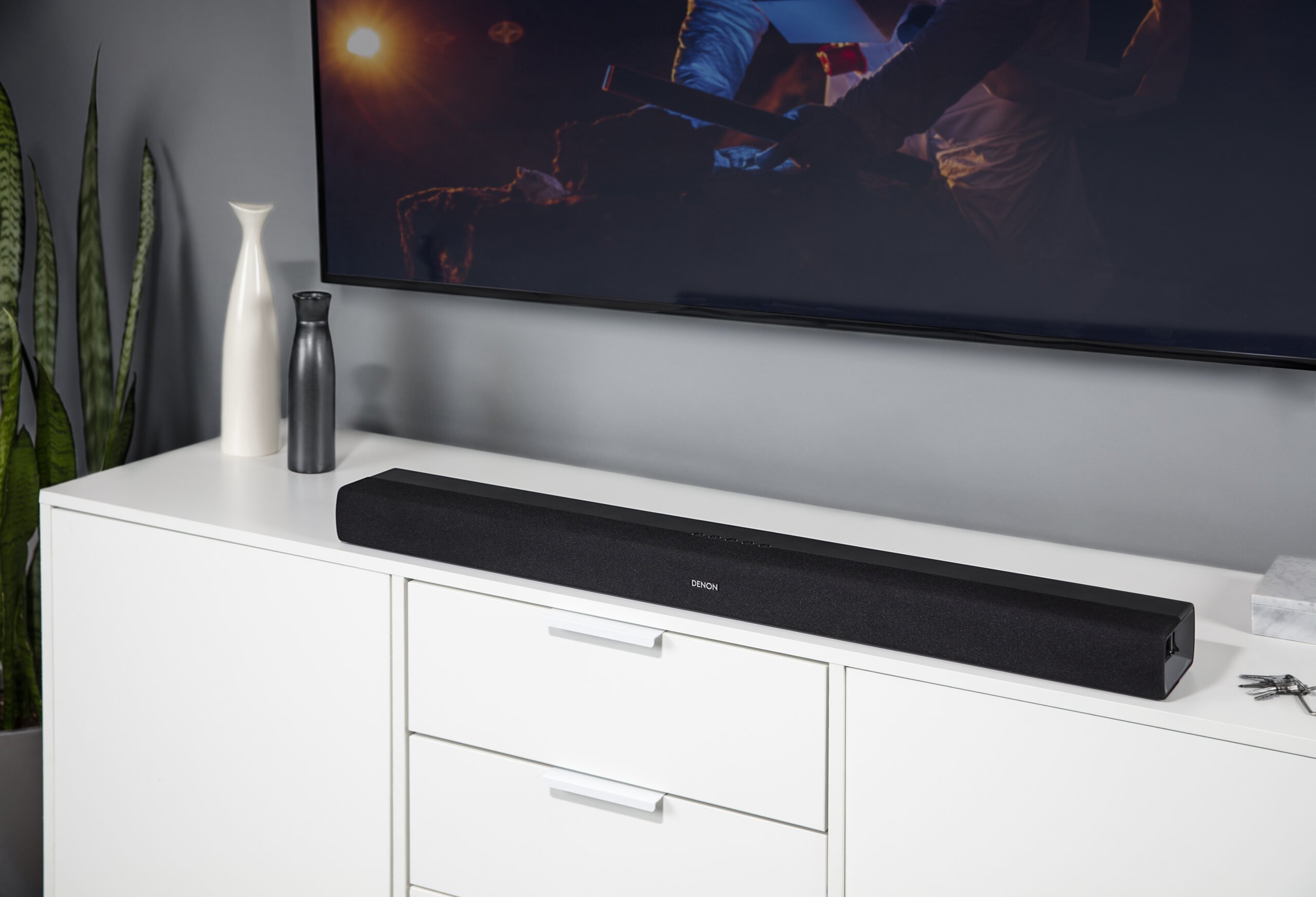 On the upside, after firing up the Blu-ray player and trying out the 4K UHD disc of Cliffhanger (1993), from the outset the performance envelope of the S216 became much clearer. While still struggling to deliver satisfyingly in the horizontal plane, the Movie mode combined with DTS Virtual:X settings compensated by offering up a convincing vertical throw with helicopters and gunshots veering overhead. The sound bar can achieve all this while competing handsomely with dialog intelligibility or the clarity of the orchestral music score. Furthermore, there was a surprising amount of bass presence in the thud of punches and numerous earth-shattering explosions littering the movie’s final half hour.

Low frequency performance does come with a caveat, though. With only two three-inch drivers to provide the rumbles, the listener must keep a careful eye on the volume and bass controls so as not to stray into unwanted distortion territory (which I discovered is easily done). There is a reason Denon supplies a subwoofer output on the rear of the unit and it’s for those who want to pick up the slack where this bar rolls off.

Setting up music playback via Bluetooth is a breeze, tested both from both a Windows tablet and Android phone. The Denon could articulate the strings of Dave Gilmour’s acoustic guitar on Pink Floyd’s Wish You Were Here with refreshing ease while also being able to highlight the grinding drums and Plant’s piercing harmonica motif in Led Zeppelin’s When the Levee Breaks. There’s not much to write home about here in terms of stereo imaging and the S216 can get a little muddled in densely orchestrated recordings, but the sound bar can act as a perfectly acceptable living room music companion.

If you’re in the market for an entry-level upgrade to a sound bar from your inbuilt TV audio, or just need a sonic boost for your second AV room, the DHT-S216 can fit the bill. Not surprisingly for a $249 price tag you’re not going to get reference audio performance to any degree, but there’s a value proposition here combined with enough attractive usability features and pleasing design elements to warrant a look.