Forum List What's new Dark Style Change width
Log in Register
What's new Search
Menu
Log in
Register
Navigation
Install the app
More options
Dark Style
Close Menu
Posted on March 29, 2021 by Josh Steinberg
You are using an out of date browser. It may not display this or other websites correctly.
You should upgrade or use an alternative browser.
Albert Brooks’ comedic masterpiece about the afterlife makes its long awaited Blu-ray debut. 5 Stars

Defending Your Life, from actor/writer/director Albert Brooks, is a masterpiece of filmmaking that has withstood the test of time.  It presents a glimpse of what happens after we die that is equal parts hilarious and sincere, a film that celebrates the human spirit in all of its complexity and glory.  Thirty years on, it’s as fresh and likable as it ever was.

Daniel Miller (Albert Brooks) is like a lot of us. He tries his best to get along, making his way through life in a bland advertising job, occasionally treating himself to something special.  Yet he is often held back by that inner voice that tells us not to step out of line, not to make waves, not to risk too much out of fear of losing what little we already have.  For his 39th birthday, Daniel makes one of his occasional splurges, a luxury car that’s not quite the one he wanted but is all he can justify to himself.  But after one Barbra Streisand-induced distraction puts him on a collision course with a bus, it all ends.

Defending Your Life imagines what comes next.  As long as man has been capable of self-reflection, “What happens after we die?” has been a question that’s followed.  It turns out that the human soul is much like matter: it cannot be created or destroyed, but merely transformed.  And so, when we die, we ascend not to biblical place, but one that looks more like an all-inclusive resort: Judgment City.  It is there that our time on this earth is evaluated, our life lessons tabulated, and a judgment made.  Some people, those who have lived fulfilling lives, overcoming their own demons and demonstrating empathy towards others, get to move on to what’s next (“next” being something that wisely falls out of the purview of this film), while those who have not mastered life on Earth are sent back to try again (and again, and again…).

As Daniel arrives in Judgment City and meets with his advocate, Bob Diamond (Rip Torn, in a perfect bit of a casting), it becomes apparent that Daniel’s biggest flaw from his time on Earth has been his fear.  While Daniel rationalizes that his fears have kept his life in balance, the panel of judges watching his highlight reel in preparation for their verdict believe that Daniel’s fears have prevented him from experiencing the full range of what life has to offer.  There’s a fine line between self-preservation and the path of least resistance, and the prosecutor in the case (Lee Grant, turning in a fine performance) feels strongly that Daniel has fallen on the wrong side of that divide.

But with the trial taking up only the days during Daniel’s weeklong stay, his nights are free to explore the city, a place where the food is the best in all creation but doesn’t make you gain weight, and where finding out who you were in a past life is as simple as going to the movies is for us mortals.  (Don’t miss an excellent cameo by noted reincarnation enthusiast Shirley MacLaine!). But more substantial to Daniel than any glimpse of a past self or calorie-free shrimp is Julia (played with radiant warmth by a glowing Meryl Streep), a seemingly perfect woman who is sailing through her judgment and certain to move on to the next phase of existence.  As Daniel begins to get to know Julia, he becomes more comfortable within himself, opening up to her and allowing his vulnerabilities to show, perhaps creating a new path forward.

Defending Your Life arguably represents Brooks’ best work behind the camera.  His excellent screenplay does a tremendous amount of world building, allowing the rules of its afterlife to unfold in a way that brings the audience along without running afoul of any specific system.  By creating a sort of in between place without showing where those who move on go, the film invites audience members of all beliefs to imagine themselves in this world.  The specific look of the place might scream 1991, but there’s even a throwaway line suggesting that it changes with the times.  The genius of Brooks’ work here is that he’s taken what has the potential to be one of the most hotly debated topics in this world and turned it into something universally appealing.  As a director, he has a light touch, trusting his cast to bring his words to life, and as a performer, he’s never afraid of allowing himself to look foolish in service of the story.  Most importantly, all of these skills allow the audience to both judge and see themselves within his character.

Defending Your Life is presented in its original aspect ratio of 1.85:1.  This new transfer was created from a 4K scan of the original negative performed by Warner’s MPI facility, was approved by Albert Brooks, and is a beauty.  It represents a significant upgrade from the previously available DVD and older HD master available on the various streaming services.  Allen Daviou’s photography is simply gorgeous, giving Judgment City the most invitingly warm look.  Scenes in the judgment area have a slightly banal yet pleasant appearance, while the nighttime scenes where Daniel and Julia spend their time together are given a subtly glamorous glow.  There are no issues whatsoever with wear, fade, damage or debris.  Simply put, the film has never looked this good.

The film’s original theatrical Dolby Surround track is faithfully reproduced via a lossless DTS-HD MA 2.0 encoding.  Though the film is primarily dialogue driven (and that dialogue is perfectly clear and discernible here) it offers a surprisingly wide soundstage, with Michael Gore’s enthusiastic score giving Judgment City a sound that perfectly encapsulates the film’s blend of the whimsical, the banal and the profound.  The little touches go a long way, such as the more notable use of the surrounds when the characters are watching highlights of their own lives.  As was the case with the video, there are no defects or signs of age or wear in the track.

Defending Your Life: Albert Brooks and Robert Weide (28:07) – This new interview, conducted remotely due to the pandemic but with far better audio and video quality than one might expect, is a wonderful conversation that touches upon all of the key elements of the film, from its origins and development, its casting and production, to the studio’s failed attempt to change the beginning and Brooks’ own difficulty in devising an ending.  Running just under half an hour, it offers everything one might have wanted to hear in a commentary but in a more focused presentation.

Spending Time in Judgment City: Donna Bowman on the Afterlife (21:41) – Bowman, a theologian, offers her thoughts and analysis of the film’s portrayal of the afterlife.  Her comments, recorded remotely via webcam, are intercut with clips from the film.  It’s a very academic presentation that looks at Defending Your Life on its own and in comparison to other works with similar themes.  While the feature is well assembled, viewers who are already well-versed in the film may be slightly let down by Bowman’s tendency to explain elements that the film itself makes perfectly clear.

Albert Brooks, Lee Grant and Rip Torn (12:23) – This new assembly of 1991 interviews with Brooks, Grant and Torn, intercut with clips from the film, offers more insight into the film’s production than a typical EPK. Brooks speaks mostly about his process as a director, while Torn and Grant speak about what attracted them to the project.

Trailer (1:51) – The film’s droll original theatrical trailer, advertising the film as “the first true story of what happens after you die,” is presented in HD.

Brooklet – Pamphlet shaped and labeled as “Your visitor’s guide to Judgment City,” the booklet includes an enthusiastic essay by filmmaker Ari Aster and the information about the transfer.

Defending Your Life, thirty years on, is as warm, witty and brilliant as it ever was.  The new transfer has the film looking and sounding brand new, while the collection of new and vintage interviews offered as bonus material offer a great deal of insight into its creation.  I can think of no higher praise to offer than this: of all the films I’ve seen about what happens after we die, I hope this one is what it’s really like.

This is one of those releases that I’d call “quietly outstanding”. On paper, the specs might seem underwhelming. Why the 2.0 surround instead of a 5.1 remix, you might think. Or why some interviews but no commentary, also a thought that could come to mind. But then you pop in the disc and the audio is full and warm, surprisingly immersive. And then you watch the featurettes and realize they mention everything you might have always wanted to know. I was having trouble figuring out how to phrase that as I wrote the review proper but I didn’t want it to go unmentioned. This is a fabulous release and one I’m going to enjoy and revisit for many years to come.

The Buy Now on Amazon link isn't working for me.

Just picked this up today at my local Zia's outlet for $25. Looking forward to watching.
You must log in or register to reply here.

Today at 3:29 AM
Robert Crawford 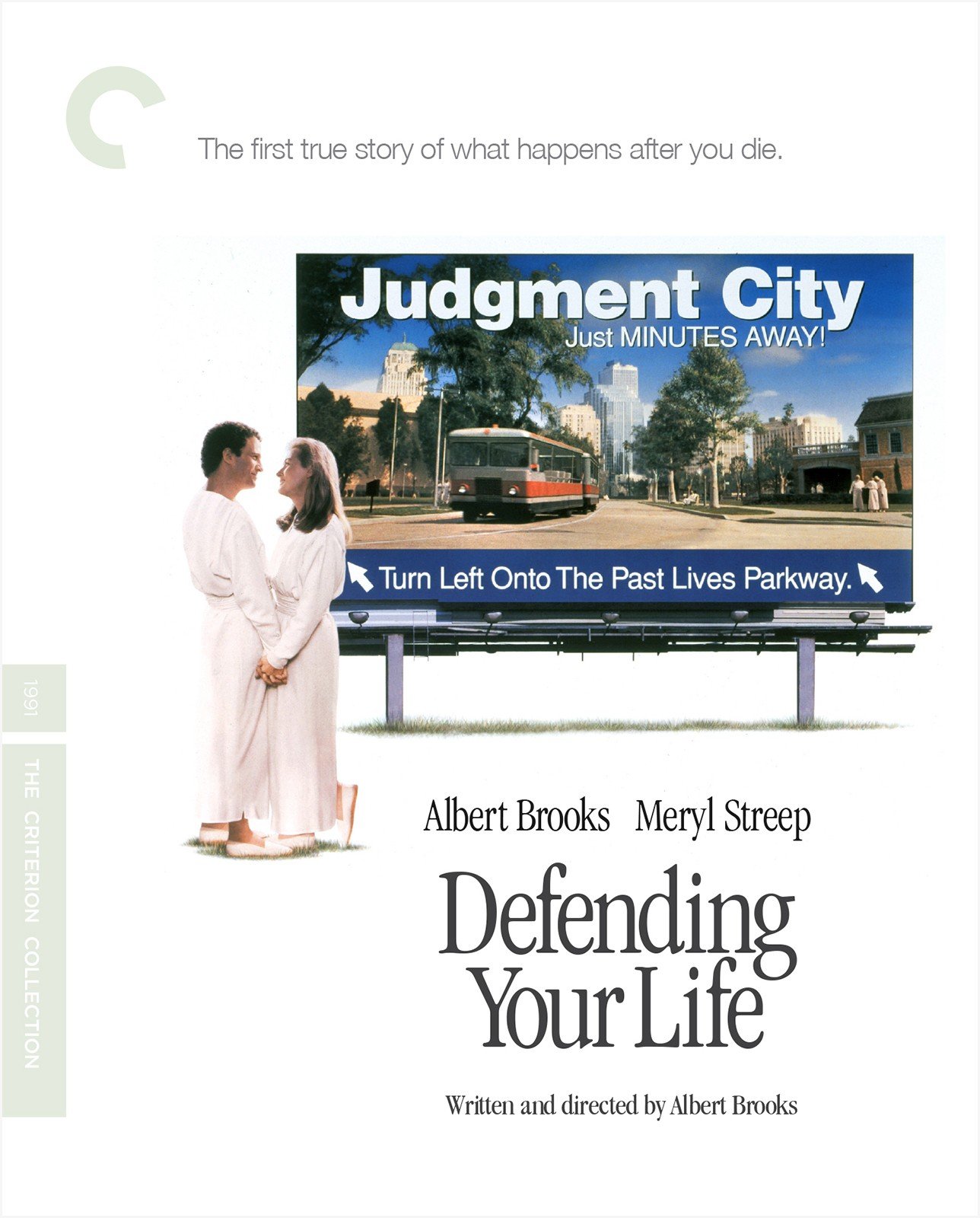