Forum List What's new Dark Style Change width
Log in Register
What's new Search
Menu
Log in
Register
Navigation
Install the app
More options
Dark Style
Close Menu
Posted on July 18, 2019 by Matt Hough
You are using an out of date browser. It may not display this or other websites correctly.
You should upgrade or use an alternative browser.
Lovely, thought-provoking allegory about life and death. 3.5 Stars

A striking amalgamation of genres – part comedy, part melodrama, part romance, part suspense – gives Mitchell Leisen’s Death Takes a Holiday a most unique cinematic identity. With so many philosophical and psychological issues crammed into an 80-minute running time, it’s little wonder that Death Takes a Holiday remains one of the most intriguing movies of the pre-Code era.

Death (Fredric March) is unable to relate to humans and their unwavering disgust and fear of him, so he takes the form of Prince Sirki visiting the home of Duke Lambert (Sir Guy Standing) and tries life as a person for three days. Three of the women in the house party (Gail Patrick, Evelyn Venable, Katherine Alexander) are instantly attracted to Prince Sirki, and he begins to experience the deeper meanings of what it is to be human. The beautiful Grazia (Evelyn Venable) is the pathway for Death to finally learn what it is to love with its passionate depths which give life real meaning, but then Death must decide how his three-day holiday will end for all those concerned.

The screenplay by Maxwell Anderson and Gladys Lehman was based on the Italian play by Alberto Casella and its English adaptation by Walter Ferris, and it skillfully combines comic, dramatic, and romantic possibilities quite astutely. Joined with director Mitchell Leisen’s controlled sense of atmosphere (pure dread in the first quarter and then lighter and more sparkling ease for much of the film until its dramatic conclusion), the vagaries of tone and mood are pretty captivating. We see Death at first as an ominous and threatening shadow (kudos for the wonderful spectral shadow moments achieved by special effects guru Gordon Jennings) and then witness his steady adaptation as a human delighting with the variety of activities during his three-day holiday: participating in a yacht race, playing ping pong, enjoying a horse race, and gambling at roulette where he breaks the bank. As he learns about humans, they learn about him, too, as one woman, the good time girl Rhoda (Gail Patrick), isn’t willing to waste her time with an inexperienced lover while the soulful Alda (Katharine Alexander) is presented with the real nature of the man she’s trying to seduce. And then there’s the surprising reaction of the quiet, lovely, and troubled Grazia (Evelyn Venable) which brings the story to a dramatic and unexpected conclusion, an ending that in a post-Code cinematic world would most likely not have been allowed. Leisen in only his second film gets some astonishing shots from cinematographer Charles Lang: a beautiful intrusion into Sirki and Grazia’s talk at a fountain is shot halfway through just their reflections in the water before joining them “in the flesh,” as it were. Leisen was honored with a special prize at the Venice Film Festival for his delicate and sensitive work in this movie.

Fredric March offers an oddly alien-type accent for most of the movie (though it seems to disappear near the end of the picture), but he maneuvers Death’s discoveries about the joys of human existence quite wonderfully, and with the make-up adding some darkened patches under his eyes, it never lets us forget whom the other characters are interacting with. The film’s best performance is provided by stalwart British thespian Sir Guy Standing who conquers his own fears and dreads and inevitably stands up for the inhabitants of his house party. All three ladies – Gail Patrick, Evelyn Venable, and Katherine Alexander – do sterling work with their very different characters while familiar character actors Henry Travers and Helen Westley add lightness and depth to the personnel involved. Kent Taylor’s Corrado makes an adequate if unspectacular love interest for Grazia.

The film’s original theatrical aspect ratio of 1.37:1 is faithfully rendered in this 1080p transfer using the AVC codec. The sparkling Paramount black and white look of the 1930s is present in spades with this transfer with a nice layer of film-like grain present, a strong grayscale bringing the richness of the black levels into clear focus, and excellent sharpness offering nice details in the faces of the actors. But there are more tiny scratches present than one would like in Universal’s high definition transfer occasionally irritating with their presence. The movie has been divided into 8 chapters.

The DTS-HD Master Audio 2.0 mono sound mix is very much of its era with dialogue, the music, and the sound effects skillfully blended into a single track. Universal has done a tremendous job in ridding the track of any age-related hiss, crackle, flutter, or pops allowing the dialogue especially to come through clearly and effectively.

Audio Commentary: film historian Kat Ellinger provides a talky but moderately interesting assessment of the film. She spends a great deal of time discussing the career of Mitchell Leisen and much less time analyzing the themes and implications of the film. She offers a bit of background on Fredric March, Evelyn Venable, Gail Patrick, and Sir Guy Standing, but other notable players aren’t mentioned at all.

Kino Trailers: Intermezzo, Made for Each Other, Nothing Sacred, A Star Is Born, The Young in Heart, Inherit the Wind, and The Iceman Cometh.

Death Takes a Holiday is a remarkably compact allegory on man’s love of life and fear of death (its semi-remake Meet Joe Black more than doubled its running time), and this 1934 gem still plays wonderfully for modern audiences and has meanings for us that resonate just as strongly into today’s world as they did during its original release. Recommended!

I'm very much looking forward to this release. Thanks for the review, Matt!
You must log in or register to reply here. 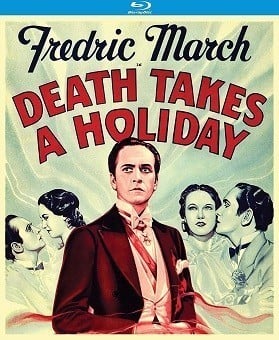