Forum List What's new Dark Style Change width
Log in Register
What's new Search
Menu
Log in
Register
Navigation
Install the app
More options
Dark Style
Close Menu
Posted on April 15, 2016 by Matt Hough
You are using an out of date browser. It may not display this or other websites correctly.
You should upgrade or use an alternative browser.
Bumpy, satirical black comedy works in fits and starts 3.5 Stars

The blackest of black comedies, Robert Zemeckis’ Death Becomes Her is one of those movies that may leave you with a sour taste in your mouth by the time its dirty doings are finished.

The blackest of black comedies, Robert Zemeckis’ Death Becomes Her is one of those movies that may leave you with a sour taste in your mouth by the time its dirty doings are finished. Filled with satirical rage against the eternal search for youth and beauty, Death Becomes Her earns its laughs after a lengthy set-up, but its underlying nastiness and vindictiveness is difficult to sustain for almost two hours, and with a group of rather noxious and toxic people at its center, the movie works in spite of itself. But the bumps along the way keep it from being flat out hilarious from beginning to end.

Martin Donovan and David Koepp’s screenplay takes a wicked and unforgiving look at America’s obsession with youth through their story of aging actress Madeline Ashton (Meryl Streep) who prizes a youthful look more than anything. Willing to literally sell her soul to the devil in exchange for eternal youth, the actress is warned by her Satan incarnate (Isabella Rossellini) to take care of herself after drinking the elixir. On those prophetic words revolves the film’s central story. Related to the tale of her fixation with youth is the story of Madeline’s longtime rival in life author Helen Sharp (Goldie Hawn) whose fiancé, plastic surgeon extraordinaire Ernest Menville (Bruce Willis), is stolen by Madeline in another unthinking and selfish whim to control everyone else’s destiny. Helen, then, spends part of the picture trying to harm Madeline and get back her former love who after fourteen miserable years of marriage to the selfish Madeline is now reduced to doing emergency cosmetic mortuary work.

Director Robert Zemeckis does a fine job of moving things along even though he must spend the first forty minutes of the movie setting up all of the major players in the farce. Thus, we get the hilariously awful musical production number “That’s Not Me” as a desperate Madeline tries to make a go of a musicalized version of Sweet Bird of Youth (Streep had only previously sung in the finale to Postcards from the Edge though afterwards has done several musicals so the singing might not be as much of a surprise now as it was then), the collapse of Helen after losing her fiancé and her miraculous transformation as a “glamazon” authoress, and pitiful Ernest’s dissolution from top surgeon to in-demand mortuary make-up artist and alcoholic. With the expository necessities out of the way, Zemeckis can then focus on the film’s real reason for existence: the then state-of-the-art special effects which, even today, are amazing. From Madeline’s vertebra-challenged neck and Helen’s missing abdomen, Zemeckis and the writers have a field day crafting wonderful gags around the ladies’ catastrophic immortality. Especially wonderful is Madeline’s careful reassembling of herself after a nasty tumble down a long flight of stairs (all done in the background) right down to the movie’s final blackout gag as the ladies literally go to pieces in their decades-long spiteful animosity toward one another.

Clearly having the most fun with the most wildly eccentric character, Meryl Streep gives an excellently daffy performance (most treasurable moment: rehearsing her gasps before Goldie’s Helen visits her in the dressing room). Both she and Goldie Hawn are not afraid to look both uber-glamorous and hideously awful as the needs arise, though Hawn’s character so set on revenge is more one-note and has much less fun to offer. In such sturdy comic company, however, Bruce Willis is clearly the odd man out. The character’s a wimp, and the actor never finds enough fun in him to make him much worth our time. Isabella Rossellini is a heart-stopper, however, with a series of breath-catching costumes which barely cover the necessaries and displaying enough enigmatic behavior to make her character’s every scene most arresting. Ian Ogilvy brings a lot of fey fun to the role of a beauty expert while Sydney Pollack as a doctor perplexed by Madeline’s condition after her header down the stairs earns some very hearty laughs.

The film’s theatrical aspect ratio of 1.85:1 is faithfully delivered in this 1080p transfer using the AVC codec. Sharpness is mostly outstanding apart from a few shots late in the movie that seem softer than necessary. Color is joyously vibrant (reds may be the slightest bit hot) with luscious skin tones. Black levels are wonderfully rich and deep while contrast has been consistently applied to make for the best picture possible. The movie has been divided into 12 chapters.

The disc offers two flavors of DTS-HD Master Audio: 2.0 stereo and 5.1. The dialogue is a bit more forward and pronounced in the 2.0 mix, but it’s clear and distinct in both mixes, and there’s just a bit of directionalized dialogue in the 5.1 track. Alan Silvestri’s jubilantly driving background score gets a nice placement in all of the surround channels while atmospheric effects occasionally get delivered to the rears but not to the degree that a more modern mix would do.

Vintage Featurette (8:58, HD): on set sound bites about the story and the characters from director Robert Zemeckis and his stars Meryl Streep, Goldie Hawn, and Bruce Willis.

Picture Gallery: forty-seven stills, behind-the-scenes shots, character portraits, and poster designs which may be stepped through manually or automatically.

The comedy may work in fits and starts, but Death Becomes Her finally gets the transfer it deserves on home video with the proper aspect ratio, great clarity, and dazzling color to bring out its strong points. Fans of the stars and the director (whose next film would be the Oscar-winning Forest Gump) will be happy to add this to their shelves.

Thanks for the review, Matt. Looking forward to picking this one up!

I probably haven't seen this movie since it was first on cable so it'll be like a new movie to me.

TravisR said:
I probably haven't seen this movie since it was first on cable so it'll be like a new movie to me.
Click to expand...

The first time I saw this was as the in-flight movie on a flight I was taking to visit my grandparents in Florida. It was my first time flying solo, and I had really wanted to see it in theaters but my parents decided I wasn't old enough for it yet. It was one of the happiest moments of my young life, that combination of flying alone and getting to watch a forbidden movie with no possibility of adult intervention. That was glorious! That I remember it so clearly about 25 years later says it all.

I thought Bruce Willis was quite good in this movie. At the time, at least for me, I was an unusual role for Willis. I thought he handled the comedy quit well.

Thanks Matt! I really appreciate your reviews. I am looking forward to purchasing this title now.

One of my favorites and Bruce Willis held his own with the 2 Oscar winners. I believe it's only been available pan scan up until now- cannot wait.

I'm pretty sure this was shot open matte. Still no reason for it to be that way on disc.

Lord Dalek said:
I'm pretty sure this was shot open matte. Still no reason for it to be that way on disc.
Click to expand...

From the review:
The film’s theatrical aspect ratio of 1.85:1 is faithfully delivered in this 1080p transfer using the AVC codec.

noel aguirre said:
One of my favorites and Bruce Willis held his own with the 2 Oscar winners. I believe it's only been available pan scan up until now- cannot wait.
Click to expand...

The Laser Disc was letterboxed.

I believe a letterboxed VHS may have been released as well, when those we all the rage.
You must log in or register to reply here. 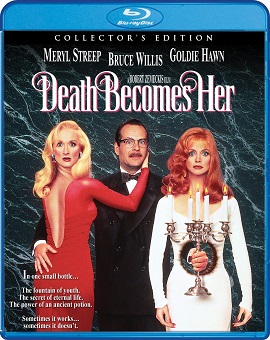