Forum List What's new Dark Style Change width
Log in Register
What's new Search
Menu
Log in
Register
Navigation
Install the app
More options
Dark Style
Close Menu
Posted on May 22, 2016 by Todd Erwin
You are using an out of date browser. It may not display this or other websites correctly.
You should upgrade or use an alternative browser.
Brash and crass, this is not your typical comic book movie. 4.5 Stars

Deadpool, the surprise box office hit from early 2016, arrives on UHD in a stunningly gorgeous transfer that does not disappoint.

Mercenary Wade Wilson (Ryan Reynolds), after proposing to his girlfriend Vanessa (Morena Baccarin), collapses and is diagnosed with terminal cancer. Vanessa suggests they look into alternative treatments, until one day a recruiter (Jed Rees) offers Wade a chance to be cured in exchange for his services as a mercenary. Wade agrees and abandons Vanessa, who believes he ran off to die alone. What Wade doesn’t know is that the experimental cure includes being subjected to extreme bouts of torture from Ajax (Ed Skrein) and Angel Dust (Gina Carano), in hopes of forcing his body to mutate and unleash special powers. Wade’s body does just that, and then some, now having super human strength and the ability to self-heal from just about anything, but leaving his body and especially his face horribly disfigured. When Wade learns that his fate is actually that of a soldier to be sold into slavery, he detonates the laboratory and escapes, hoping to find Vanessa, but fears she will reject his now disfigured body. With help from his friend Weasel (T.J. Miller), Wade decides to don a costume, take on the moniker of Deadpool, and exact vengeance on Ajax, hoping to have his appearance returned to normal before killing him. And while all of this is happening, Colossus (voiced by Stefan Kapicic) and trainee Negasonic Teenage Warhead (Brianna Hildebrand) are on a quest to recruit Deadpool as a future X-Man.

What makes Deadpool work as a film is its over the top action set pieces partnered with almost nonstop one-liners and pop culture references, mostly from star Ryan Reynolds, all happening at a nearly breakneck pace. It is also the relationship between Wade and Vanessa, and the chemistry between Reynolds and Baccarin help to sell it (as Reynolds quips in the included commentary, this is a twisted romantic comedy). First-time director Tim Miller, using his skills as a motion-capture effects director, hits a home run here, taking a chance by telling this origin story out of sequence. Deadpool opens with a title sequence that sets the tone and mood of the film perfectly, followed by a stunning and hilarious action sequence with Deadpool in full costume and gear taking on a team of bad guys, killing them off with only twelve bullets. The first third of the film flashes back and forth between this sequence and Deadpool’s origin quite effectively, with the audience never losing interest or having difficulty keeping up with the story. Ed Skrein and Gina Carano make good foils for Deadpool, with Skrein almost stealing many scenes from Reynolds. T.J. Miller, as Weasel, also has some great chemistry with Reynolds, firing off several barbs and one-liners that hit with almost perfect accuracy.

Deadpool is Fox’s second UHD disc to be sourced from a 4K DI, and is definitely of reference quality, possibly the best “demo” UHD Blu-ray currently available. Although colors are subdued, they appear much more natural than on the Blu-ray. Contrast is also improved upon, with deeper blacks and brighter whites, resulting in a higher level of detail. This is most noticeable in the intricate fabric patterns in Deadpool’s costume, and especially in areas of the costume that are more worn than others. Cloud formations in the mostly grey Vancouver skyline are also more noticeable here. This is, hands down, a great looking disc.

Also besting the Blu-ray edition in audio, Fox has included a Dolby Atmos track for the UHD release. This is a very active track during the many action set pieces in the film, even when folded down to 5.1 by my Marantz SR5008 receiver (as I’ve said in previous reviews, my room dimensions do not allow for 7.1). Sounds pan from front to back, left to right, diagonally, and in reverse effortlessly. Dialogue is clear and understandable, never getting lost in the mix. LFE also gets a good workout, thanks to the mostly hip-hop score by Tom Holkenborg (aka Junkie XL) and the occasional explosion.

Fox has included the two audio commentaries on the UHD disc that were included on the Blu-ray edition.

Audio Commentary with Actor/Producer Ryan Reynolds and Screenwriters Rhett Reese & Paul Wernick: Reynolds and the writers discuss the movie’s gestation, many of the easter eggs and pop culture references, shooting in Vancouver, and working with the cast and crew, running almost the entire length of the film with very few gaps.

Audio Commentary with Director Tim Miller and Deadpool co-creator Rob Liefield: Liefield has nothing but praise for Tim Miller and the final product, as the two discuss the making of the film at great length.

Blu-ray copy: Included is the Blu-ray edition, featuring the film in 1080p and DTS-HD MA 7.1 audio, plus the two audio commentaries listed above, Deleted/Extended Scenes with optional commentary, Gag Reel, the From Comics to Screen… to Screen documentary, Photo Gallery, and Deadpool’s Fun Sack of video clips and trailers.

Deadpool is not for everyone, but definitely gives the comic book movie a nice swift kick in the pants. The audio and video presentation runs circles around the Blu-ray edition (which is still a very good disc), and it was nice to see at the very least the bonus audio features included on the UHD disc. For those who do not yet have UHD, if you can find the UHD for only a few dollars more than the Blu-ray, it is definitely worth the minimum premium in price to future proof yourself.

This one is a stunner. Period.
You must log in or register to reply here. 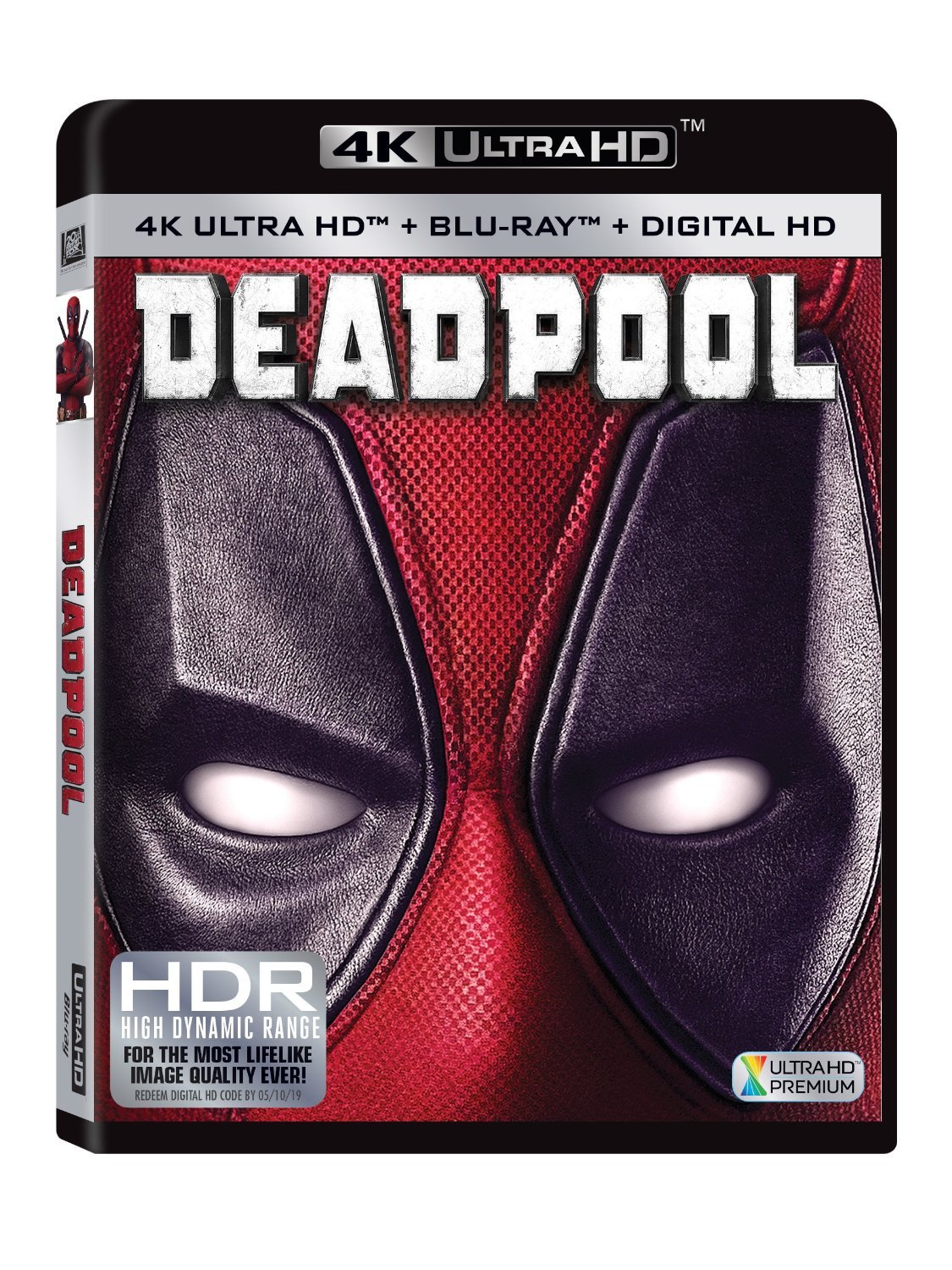