Entertaining, irreverant, but not quite up to par with the first film 3.5 Stars

Deadpool 2 is a fun ride, extending on the tone and good will established in first film. There’s much to enjoy in this sequel even while it doesn’t take any real risks and chooses to play it relatively safely. It’s hard not to be disappointed in the lack of risks this sequel takes. For a character predicated on defying the established expectations and norms of the superhero genre, playing it safe seems uncharacteristic. Still, the film is fun and the addition of Cable, Domino and others are welcome, bringing promise of exciting and funny places to go with future adventures.

“Oh? So you’re from the future? I have three questions, then. One: is dubstep still a thing? Two: which Sharknado are we on? And three: at what point will the audience say “enough with the robotic arms”?”

Wade Wilson, AKA Deadpool, is cleaning up the streets with his repertoire of foul-mouthed quips and 4th wall-breaking antics. When his unfinished work follows him home one day and murders Vanessa, the love of his life, he is despondent and suicidal. With a little help from his X-Men ‘friends’, he soon finds unexpected purpose protecting the life of a young mutant, Russell Collins from Cable, a solider from the future. Cable is a formidable opponent, seeking to destroy Collins and stop him from becoming the destructive force the future tells he will become. Wade’s only choice is to assemble a team to stop Cable and save the day. This rag-tag group of individuals with special powers, plus Peter, a man with no powers, put their lives on the line for the young Collins, whose future may not yet be set.

Deadpool 2 delivers on the promise from the first film; a cavalcade of irreverence, self-aware shenanigans that joyfully lampoon superhero movie culture, with masked smirks and winks at the audience as bullets fly and blood spills. However, rather than turn itself on its side or head, this sequel is comfortable simply continuing what worked the first time around. I can’t blame them (“if it ain’t broke”), though it means that the freshness and thrilling spark of something different and new isn’t around.

Ryan Reynolds is so uniquely gifted and qualified for the role of Wade Wilson/Deadpool, I can imagine no other actor on the planet who could do it more justice. Signing up to watch him do what we know he can so wonderfully do is a winning idea. The only hope is for the inevitable third outing, the sequel’s sequel, they can raise the stakes and bring more surprises than this enjoyable and funny follow-up does, that, for all its cheeky charms, can’t help but feel like it’s missing an ingredient or two.

The characters are all inhabited by a fine cast. Monica Baccarin, Deadpool’s heart and soul from the first film returns as Vanessa, and while her role seems abbreviated compared to the first film, she’s again very good here.  T.J. Miller returns as Weasel, as does Karan Soni as mild mannered taxi driver Dopinder, both getting some good lines. The final members of the returning cast are Leslie Uggams as Blind Al (very funny again), Brianna Hildebrand’s Negasonic Teenage Warhead and Stefan Kapicic voicing the metallic Colossus (he is once again used to great effect). Negasonic’s appearance is less entertaining, largely relegated away from the action and used less effectively this time around.

The new additions to the cast are all standout. Cable was a wise decision for this sequel, and Josh Brolin in the role as straight man to Deadpool’s incessant smart mouth proves a winning combination. Zazie Beetz’s turn as the lucky Domino is so good that her relatively short screen time is one of the main disappointments of this sequel. Beetz gives a breezy, endearing performance as the casual, confident Domino.  Young actor Julian Dennison, who was terrific in 2016’s Hunt of the Wilderpeople (directed by Taika Waititi), displays a believable disaffected quality, whose need for a friend or father figure puts his attachment to Deadpool into the comedy crosshairs. Eddie Marsan also makes an effective turn as the unpleasant Headmaster mistreating gifted youth.

Deadpool 2 is very entertaining, brutal and bloody, and, at times, very, very funny, but wasn’t able to capture as well as expected the pure comedic lightning from the first film. There are two versions of the film included with this release, the original theatrical version, plus the ‘Super Super [email protected]%!#& Cut’ which adds 15 minutes of new scenes, alternate lines, longer versions of scenes already included, and several differences for the end credit bits.

I’m a fan of Fox’s 4K UHD output, especially of their older catalogue (Die Hard, Predator). Their newer fare all looks spot on and Deadpool 2 is no different. A splendid and refined level of fine detail, natural flesh-tones, detail on fabrics, skin and other materials popping, and excellent black levels.

Deadpool 2 comes with HDR10 grading that seem to give better gradation to the shadow details, enhancing contrast and pushing the pop of Deadpool’s read suit. Director David Leitch and cinematographer Jonathan Sela wash several scenes in distinct color palettes, most notably during the opening sequences, and they are lovely on this disc. Another winning UHD from Fox.

Deadpool 2 comes with a Dolby Atmos track (the accompanying Blu-ray versions come with a DTS-HD Master Audio 7.1 track) and it that bounces and rumbles in all the right corners, Deadpool 2 is sonically a winner. The audio is generous in the LFE department, working the subwoofer nicely. Surround effects are surgical at times, with the many fights and shootouts, swordfights and explosive sequences really deliver in the rear speakers.

Dialogue is balanced well in the center channel, with every saucy quip coming  through clearly, and Tyler Bates’ score (Bate taking over scoring duties from Junkie XL who left the project when original director Tim Miller departed), though not memorable, supports the film just fine. While this film isn’t wall-to-wall action, the action sequences are strong, particularly the prison sequence and the vehicle chase, and in these moments, the audio showcases itself very well, with an immersive quality and very good balancing of all the elements.

Deadpool 2’s inclusion of the extended (uncut) version is a sizeable draw, adding to the availability of a single audio commentary by Ryan Reynolds, David Leitch, Rhett Reese and Paul Warnick. That is all there is on the UHD disc, with the rest of the extras to be found on the included Blu-ray disc.

The commentary is a relatively fun enjoyable time, and the collection of extras covers the bases just fine, with a short but likeable gag reel, a light dose of deleted/extended scenes, a little around the production, and the pre-release teaser and marketing fun.

Ryan Reynolds has always been a likable actor portraying likeable characters. With his turn as Wade Wilson/Deadpool, he embraced the role of a lifetime. With Deadpool 2, everything travels uninterrupted on the inertia of Deadpool’s success, and forgoes rattling the cage in favor of mining what already worked. The humor and emotional beats all work well, and the use of Cable as the apparent antagonist was a wise choice. Here’s hoping that the third outing–which would take an unflinching Juggernaut to stop from making its way to the multiplexes-breaks the rules with a little more abandon.

Thank you for the fine review, I've seen the theatrical cut a couple of times at the cinema. Do you recommend watching the uncut version first for me?
Expand signature
Crawdaddy's favorite "The Mandalorian" Quotes: "This is the Way" and "I have Spoken"

Thank you for the fine review, I've seen the theatrical cut a couple of times at the cinema. Do you recommend watching the uncut version first for me?
Click to expand...

Thanks! And yes, I think you’ll notice the differences and enjoy them more having that familiarity with the theatrical cut, so would definitely go with the super duper cut now!
Expand signature
"Equipped with his five senses, man explores the universe around him and calls the adventure Science" – Edwin Hubble 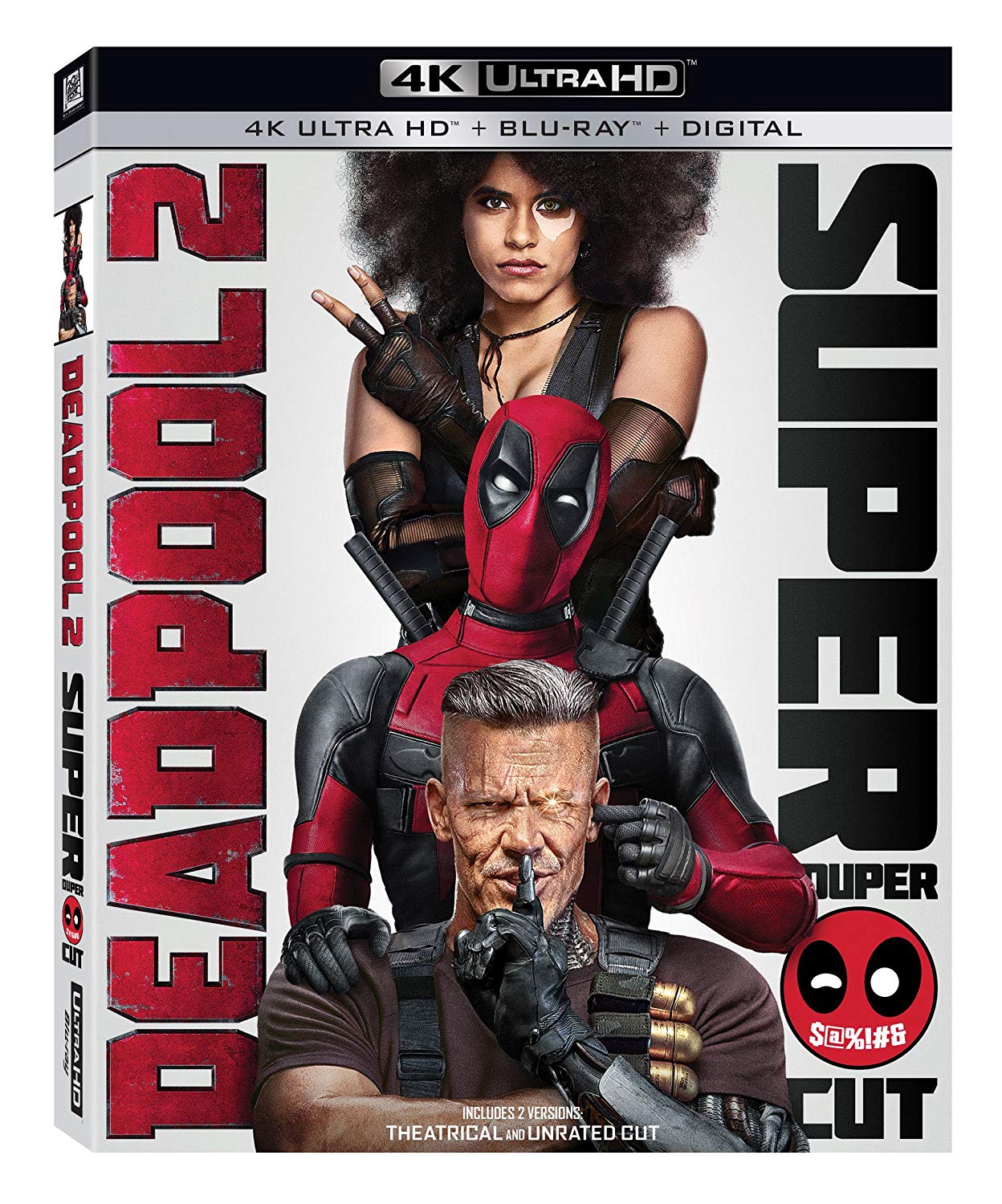