Forum List What's new Dark Style Change width
Log in Register
What's new Search
Menu
Log in
Register
Navigation
Install the app
More options
Dark Style
Close Menu
Posted on May 17, 2020 by Neil Middlemiss
You are using an out of date browser. It may not display this or other websites correctly.
You should upgrade or use an alternative browser.
The best this silly but fun film has ever looked 4.5 Stars

1990 was the start of a new decade, one that would explode with computer generated imagery-driven effects films and summer event films that would grow bigger and bigger in scale and budget. Days of Thunder represents the beginning of the end of the pre-CGI era, where computer effects would become the staple of summer blockbusters. This film is a stock summer action film with a big-name star in top billing and a tried and true plot to hang its car racing world storyline on. It’s populated with familiar character-types doing exactly what they are supposed to do and arcs toward a finale we all expect. That we enjoy the journey anyway is a testament to the quality of the filmmaking. And Paramount’s new 4K UHD release of the film presents the best-looking version I’ve seen.

“I’m gonna give you an engine low to the ground… extra thick oil pan to cut the wind from underneath you. It’ll give you thirty or forty more horsepower. I’m gonna give you a fuel line that’ll hold an extra gallon of gas. I’m gonna shave half an inch off you and shape you like a bullet. I’ll get you primed, painted, and weighed, and you’ll be ready to go out on that racetrack. Hear me? You’re gonna be perfect.”

Tom Cruise stars as Cole Trickle, a cocksure, premeditated winner with flaws of ego and persistence and a relatively steep learning curve to traverse in the world of stock car racing. He is hired by a businessman to help launch a start-up racing team along with a legendary crew chief. After an impressive initial test run for a doubting audience, Trickle quickly makes an impression following by a rocky round of initial races and a quickly established rivalry with the current top dog of NASCAR racing, Rowdy Burns. It isn’t long before Trickle’s talent burns through his initial inexperience and the work to win the Winston Cup at the Daytona 500 is on.

Days of Thunder takes itself seriously, but it isn’t a serious film. And I mean that as a compliment. It’s a movie rounded into a pure cylinder of superfluous nonsense and for some reason, beyond all understanding, it is a total blast. The film is designed entirely to be Top Gun on four wheels and a track, delving lightly into the surface world of NASCAR and existing there only to tell the familiar story of an outsider with talent who rises quickly and then suffers emotional and professional setbacks before gunning to the finish line in a triumphant blaze of tire-burning glory.

The plot has always been well-worn, but despite that, Days of Thunder remains a well-made film packed with exciting sequences of car racing, bumping, scraping, and crashing.   Those racing sequences hold up extremely well, thanks in large part to the attention to detail and taut editing style of director Tony Scott. Scott once again brings excitement to male dominated action with his unique eye, doing for race cars in Days of Thunder what he did for fighter jets in Top Gun. He gets the action screaming across the screen while respecting the venue in which he is telling his story. He respects NASCAR but, despite being set amongst that world, it doesn’t really feel like a NASCAR movie. I am not sure if that is a good or bad thing. Oddly enough, Will Ferrell’s Talladega Nights gave us a bit more NASCAR authenticity, cleverly mocking while celebrating that world.

The cast does well with the material. Cruise shows signs of some good decisions for his character that are early indications of what he has to offer as an actor of stronger caliber. He allows his character to be foolish as much as talented which helps take the edge off the ego needed to explain many of the actions Cole undertakes. His is not an obviously likable character, but with the interactions he has with Robert Duvall’s Harry Hogge crew chief, and the bond they develop, he opens up and becomes more likable. Duvall as the experienced, fatherly Hogge wears the character well, playing the role with ease and what seems like and embedded familiarity – perhaps this role closely mirrors Duvall’s natural sense. Nicole Kidman as the love interest is even keeled but a tad dull. There is a little chemistry between her and Cruise’s Cole Trickle, and the romance is treated as a plot ingredient rather than a focus and feels exactly like that throughout. Michael Rooker plays Rowdy Burns with the right level of smugness and ego to bring the character 180 degrees by the end the time he must ask Cole to drive his car for him and Randy Quaid as the businessman owner of the race team plays the self-centered character straight. Finally, Cary Elwes as the late addition foe to Cole Trickle is a little too smarmy and unlikable to be taken seriously.

Days of Thunder might be soft in a few places despite its efforts to rev up machismo (and Hans Zimmer’s guitar-laden score), but it still manages to entertain.

Paramount’s release of the “newly remastered” (and supervised by producer Jerry Bruckheimer) Days of Thunder in Ultra High Definition, with Dolby Vision grading, puts the previous Blu-ray releases of the film to shame. Shot on 35MM with Panavision cameras and lenses, Thunder has always enjoyed a wonderfully filmic look. Grain is where it’s supposed to be, and despite a few softer shots here and there, which I think are original to the film and likely how they’ve always looked, the film is crisp and rich with detail and alive with colors.

Scott’s warmer aesthetic gives rise to deep oranges, warmer flesh tones, and pops of green and brown and black when the scene calls for it. Sweat and grime on Trickle’s face are impressively clear, and all the issues I noted from the previous Blu-ray release (dust and spec, included) are all taken care of here.

Like Top Gun, this is the absolute best Days of Thunder has looked in our home theaters, and maybe that we’ve ever seen (I don’t recall the quality of the image from my theatrical viewing, but I can’t imagine it was this crisp and terrific looking).

The audio here is the same made available on the previous Blu-ray releases. It’s an above average English 5.1 Dolby TrueHD audio track. The racing sequences are strong in the front channels and sweep across the surrounds nicely. The bass is deep, but the subwoofer doesn’t rumble quite as rambunctiously as you might expect for the number of throaty engines, squealing tires and fender smashes offered up throughout. Dialogue in the center channels is clean but just very slightly soft. The audio track suits the film and despite missing an opportunity to thunder through the subwoofer and wrap around in the surrounds it shouldn’t disappoint.

I’ve rated this slightly higher than I did the Blu-ray release I reviewed years ago. I am not sure if I’ve had a change of heart or if my more recent upgraded home theater audio equipment has given it a little more oomph, but it does play better than I remember.

Days of Thunder offers up just two special features, a newly produced ‘Filmmaker Focus: Days of Thunder’, with a short interview with producer Jerry Bruckheimer talking about the team that made the film and the research that went into it, interspersed with scenes from the film. It’s nice, but short and too slight to be meaningful.

The second special feature is an isolated score track, quite the surprise, allowing you to hear Hans Zimmer’s popular score alone as you watch the film. If you’re a fan of the film and score, you would do well to pick up La La-land records limited edition release here.

The HD theatrical trailer available on the previous Blu-ray release appears to be missing.

While no Blu-ray version is included, a Digital Copy is.

Days of Thunder is still just as silly as when I sat down in a crowded theater in Southampton, England back in 1990 to enjoy.  The story, co-created by Tom Cruise, has always felt like a calculated move to reproduce the success experienced on his earlier team up with Bruckheimer and director Tony Scott, Top Gun. There aren’t any plot surprises and it all falls and fits neatly into place just as you think it will, but still manages to be a well-crafted nearly two hours of escapist fun. There’s fun to be had here, and in 4K, that fun has never looked so good.

Thank you for your review. I suspect I'll get a notice today from Target that my "pre-order" is delayed. I'm disappointed about the audio not being Atmos.

Robert Crawford said:
Thank you for your review. I suspect I'll get a notice today from Target that my "pre-order" is delayed. I'm disappointed about the audio not being Atmos.
Click to expand...

Yeah, I was surprised. Since "Top Gun" and "WotW" got the Atmos upgrade, I figured "DoT" would as well.

I'd already changed the specs for my review when I watched the disc the other night! When I clicked on the "Display" during playback to make sure it ran Dolby Vision, I saw 5.1 for the soundtrack and thought MY PLAYER had screwed up - it had to be Atmos, didn't it???

Robert Crawford said:
Thank you for your review. I suspect I'll get a notice today from Target that my "pre-order" is delayed. I'm disappointed about the audio not being Atmos.
Click to expand...

Well, I was wrong again as my 4K disc of this movie arrives today.
You must log in or register to reply here. 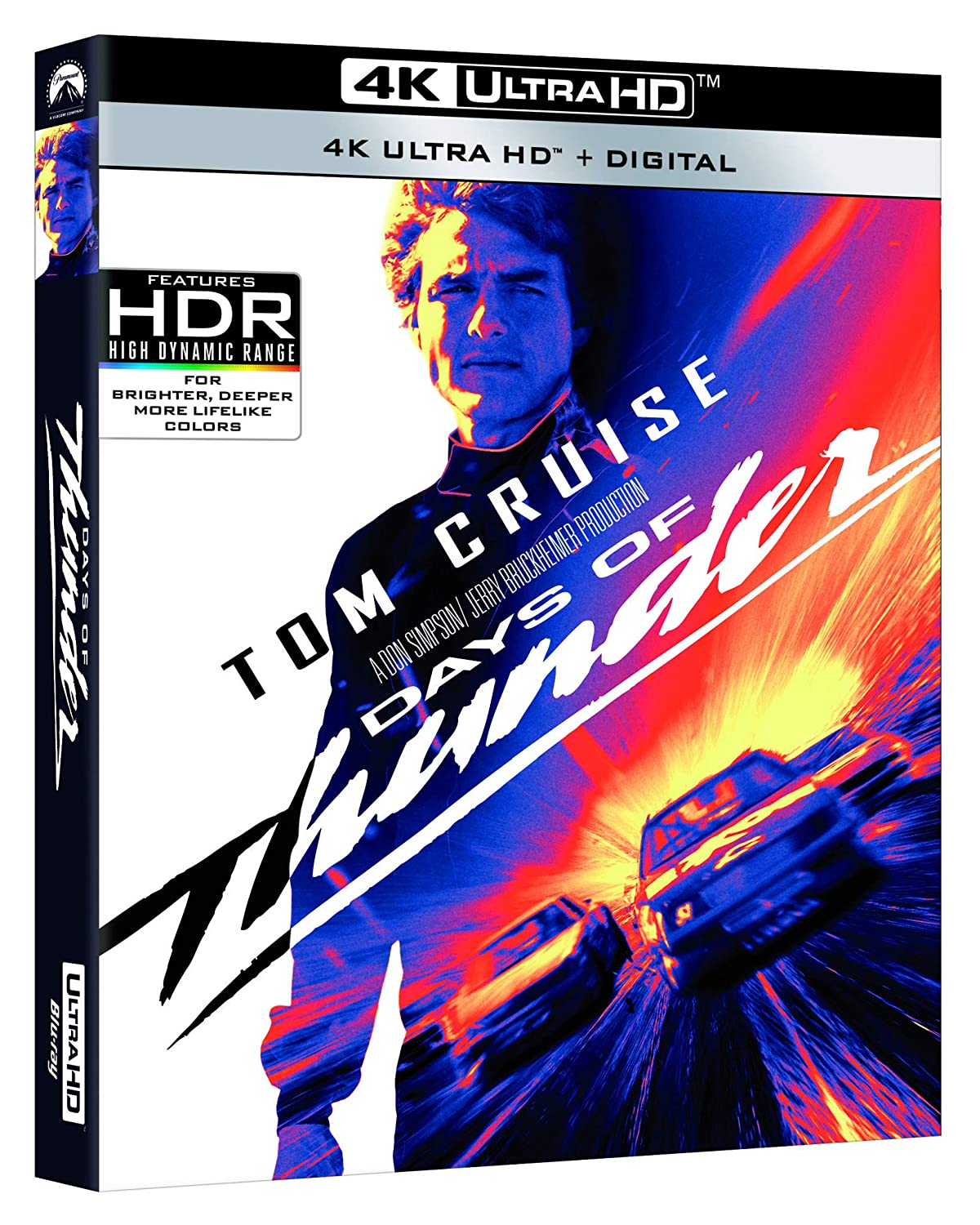