Forum List What's new Dark Style Change width
Log in Register
What's new Search
Menu
Log in
Register
Navigation
Install the app
More options
Dark Style
Close Menu
Posted on March 5, 2020 by Todd Erwin
You are using an out of date browser. It may not display this or other websites correctly.
You should upgrade or use an alternative browser.
Riveting and entertaining 4 Stars

Todd Haynes’ Dark Waters tells the story of how corporate attorney Rob Bilott (Mark Ruffalo) uncovered and exposed DuPont’s careless dumping of toxic waste from the production of Teflon that put the lives of its workers and an entire community at risk for decades.

Attorney Rob Bilott (Mark Ruffalo) has just made partner at his law firm that represents large chemical conglomerates when cattle farmer Wilber Tennant (Bill Camp) arrives at his office seeking representation against DuPont, who owns the landfill adjacent to his property. Tennant has lost close to 200 of his herd from cancers and birth defects, which he assumes is being caused by chemicals leaching from the adjacent landfill, despite the company’s promise that nothing toxic would be dumped there. Rob’s boss and senior partner, Tom Terp (Tim Robbins), is cautious about allowing Rob to represent Tennant, as the firm represents many of DuPont’s competitors and they have been courting DuPont for some time. Both Terp and Rob know an executive on DuPont’s legal counsel, Phil Donnelly (Victor Garber), who at first complies with the investigation, until Rob picks up on a few inconsistencies in the records – why does DuPont need 50-gallon drums for a landfill designated for paper waste, and what is PFOA-C8 that they are storing in these drums? As Rob delves deeper into the investigation, a chemist helps him figure out that PFOA-C8 is a link of eight carbon atoms, a compound that is so strong it is not only waterproof, but it can not be broken down naturally either in the environment or within a living creature. To make matters worse, DuPont is not only the town’s top employer, it also sponsors many civic activities within the community.

It is Mark Rufallo’s performance that really sells this story, a determined man willing to take down the goliath-like DuPont at all costs, including possible loss of family and his own health. Rob Bilott is the type of role that Rufallo has made a career out of, in many ways not that different from Inspector David Toschi from Zodiac, journalist Mike Rezendes from Spotlight, or even Bruce Banner from the Marvel Cinematic Universe. You can tell just by his expressions that he has an itch to scratch, and won’t stop until that itch has been relieved. Anne Hathaway has what appears on the surface as the rather thankless role as Rob’s wife, Sarah, who may have little to do with the investigation but does show as a strong woman standing by and supporting her man while raising their three kids through all of this. The script by newcomer Mario Correa and Matthew Michael Carnahan (World War Z, 21 Bridges), based on the New York Times magazine article The Lawyer Who Became DuPont’s Worst Nightmare by Nathaniel Rich, never gets overly preachy about big business or corporate law being generically evil. Director Tod Haynes is perhaps better known for more independent and off-the-beaten path dramas like I’m Not There, Carol, and Far from Heaven, but does take a more mainstream approach to the material with Dark Waters.

Dark Waters was captured at 2.8k resolution on Arri Alexa Mini cameras and completed as a 2K digital intermediate in the 2.39:1 aspect ratio. To give the movie an added sense of bleakness and corporate corruption, colors have been deeply de-saturated, with heavy blue tinting in the infected town and overly warm yellows at the law firm and Rob’s house. Even with all that processing, colors still appear rather natural. Detail is very good, with well-defined skin and fabric textures. Contrast is excellent, with some very dark sequences retaining incredibly rich shadow detail.

Dark Waters is first and foremost a drama, so don’t expect too much from its DTS-HD MA 5.1 track. Dialogue is strong and well-prioritized throughout. Music is spread across all channels, and surrounds kick in occasionally with atmospheric effects. LFE is used to dramatic effect, helping to enhance a tour of a chemical plant and a medical emergency, to name a few.

Uncovering “Dark Waters” (1080p; 5:38): A rather brief making of featurette that looks at how Mark Ruffalo optioned the source material, his collaboration with Rob Billot, shooting on-location in Ohio, etc.

Dark Waters is a riveting and entertaining whistle-blower drama with a powerful performance by Mark Ruffalo. 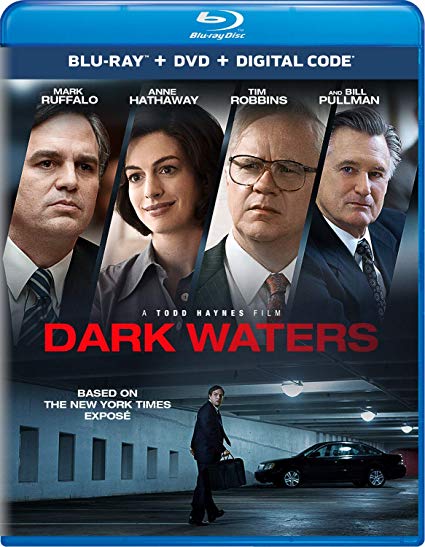