Forum List What's new Dark Style Change width
Log in Register
What's new Search
Menu
Log in
Register
Navigation
Install the app
More options
Dark Style
Close Menu
Posted on November 8, 2017 by Todd Erwin
You are using an out of date browser. It may not display this or other websites correctly.
You should upgrade or use an alternative browser.
Underwhelming and forgettable 3.5 Stars

Adapting a seven-part series of novels into a movie is no easy task, and The Dark Tower hits that point squarely on the head. The bright spots, however, are in the casting of its two leads, Idris Elba and Matthew McConaughey, who almost make the film memorable.

There is a tower that protects multiple universes from chaos and utter destruction inflicted by pure evil. Roland (Idris Elba), one of the last surviving Gunslingers, has been sworn to protect the Dark Tower from the likes of Walter, the Man in Black (Matthew McConaughey), who has been kidnapping children from the universes the Tower protects who may have the power in their mind to destroy it. One of those children is Jake (Tom Taylor), a troubled young boy who lives with his single mother Laurie (Katheryn Winnick) and her boyfriend Lon (Nicholas Pauling), who would prefer that Jake not take up so much of Laurie’s free time. Jake has been having visions of both Roland and Walter, prompting him to draw sketches of them for his psychiatrist (Jose Zuniga). When Lon convinces Laurie to send Jake to a mental hospital for observation, Jake discovers that the doctor and nurse who arrive at his home to take him into custody are actually servants of Walter and escapes though a portal to find Roland.

Some of the best adaptations of Stephen King’s novels have been as mini-series for television. The Stand, It, Salem’s Lot, I even prefer the TV mini-series of The Shining over Kubrick’s film adaptation. The reason is that many of King’s works are dense when it comes to material, and also he tends to write more of what is going on in the minds of the characters, something that doesn’t always translate well to a visual medium. There have been exceptions, of course (The Shawshank Redemption, The Green Mile, The Mist, Christine, The Dead Zone). Two of King’s works that fans have been anticipating a film or TV adaptation of for decades have been The Talisman (written with Peter Straub) and The Dark Tower series of novels. After many stalled attempts, The Dark Tower emerged on movie screens late this past summer, but to disappointing reviews and box office, partially due to the strong negative word of mouth after poor test screenings caused the film to undergo major reshoots and heavy editing. What was supposed to be an epic movie along the lines of Lord of the Rings became a watered down synopsis of all seven books with a 95 minute running time that plays as a sequel to those books. In many ways, the movie The Dark Tower reminds me of the 400′ Super 8 digests the studios used to sell movie collectors until the VCR.

And that is a shame, because the two leads, Idris Elba and Matthew McConaughey, are the best things in this empty shell of a movie. Elba is commanding as Roland the Gunslinger, While McConaughey walks a very fine line between a serious villain and chewing the scenery. While the focus of the books were the conflict between Roland and Walter, the movie focuses more on Jake (a minor character in the novels), his visions, and his journey to find Roland.  It’s a movie that tries so hard to please both fans of the novels and the average movie-goer that it fails to do neither. Perhaps I’m being a bit harsh, as The Dark Tower isn’t necessarily a bad film, it’s more of a disappointment, as the viewer will likely ask themselves “What if…”

The Dark Tower was captured on Arri Alexa XT and Arri Alexa 65 cameras at 3.4k and 6.5k resolutions, then completed as a 4k digital intermediate using Dolby Vision high dynamic range (HDR). Sony’s 2160p transfer, which was presumably derived from that 4k DI, also uses Dolby Vision HDR, retains the film’s theatrical aspect ratio of 2.39:1 throughout its 95 minute running time. (Disclaimer: the equipment used to review this title only supports HDR10 at this time.) Fine detail excels in this UHD version, particularly in the actors’ facial features (McConaughey is starting to really show his age here) and the terrain of the worlds Walter and Roland inhabit. Colors, which are often muted, have a more natural feel to them, with additional gradients that the wider color gamut of both UHD and HDR provide. Contrast is also excellent, providing deep blacks that still retain fine shadow detail and whites that never bloom or appear blown out. The presentation is virtually free of any compression artifacts or banding issues. This is a reference-quality transfer.

The Dolby Atmos track, which is also Dolby TrueHD 7.1 backwards compatible, improves upon the DTS-HD MA 5.1 track found on the included Blu-ray edition of the film. Even in a 5.1.2 configuration, the track expands to fill the entire room, with atmospheric sounds benefiting the most from the height channels. The track contains a much stronger low-end, as evident in some of the earthquake sequences. Tom Holkenberg’s (aka Junkie XL) score also benefits from the wider dynamic range and frequency response often found in Dolby Atmos tracks. Dialogue is clear and understandable throughout, never becoming drowned out by the mix.

As seems to be the industry norm with UHD, all of the Special Features can be found on the included Blu-ray edition. There appears to be a lot of repetition in the featurettes included.

Deleted Scenes (1080p; 6:22): Four scenes are included (with all the reshoots one would think there would be more), viewable as a whole or each scene individually; Original Walter Intro, Original Dream, Diner/Post Diner, and Walk and Talk.

Last Time Around (1080p; 9:14): The filmmakers and author Stephen King have nothing but praise for the film.

Steven King: Inspirations (1080p; 4:25): King discusses his inspirations for the novels and the long journey the books made to the big screen. King’s words are taken verbatim from the previous featurette.

The Gunslinger in Action (1080p; 8:29): Idris Elba and the crew discuss the character of Roland and the stunts used in the film that revolved around the character.

A Look Through the Keyhole (1080p; 3:42): Three vignettes of motion graphics with readings from the novels by Idris Elba and Matthew McConaughey, vieawable as a single feature or each vignette individually; And the Gunslinger Followed, Worlds Other Than These, and The Gunslinger’s Creed.

Digital Copy: An insert contains a code to redeem a digital copy and rewards points on SonyRewards.com. If you redeem the copy as directed on SonyPictures.com, you will have access to a streaming UHD version with HDR on Sony’s Ultra movie service available on Sony UHD TVs and HD versions on Movies Anywhere and UltraViolet retailers.

The Dark Tower is a disappointing and forgettable film, yet the UHD boasts an incredible audio and video experience with lackluster special features. 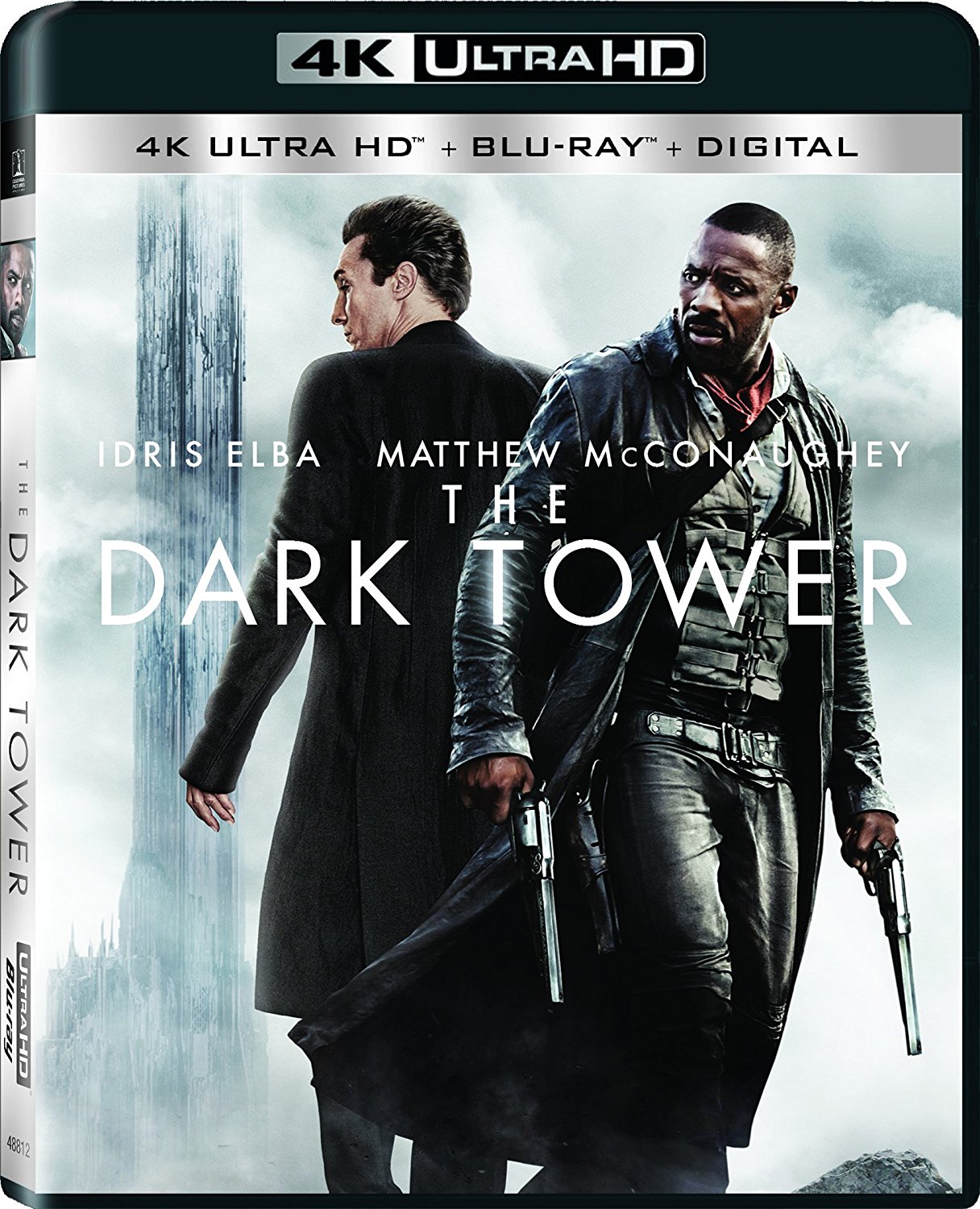