Daddy’s Home 2 is a waste of talent and time, an infrequently humorous attempt at a family Christmas film that is neither heartwarming nor charming. Although the 4K UHD Blu-ray from Paramount does boast a nice, colorful video transfer and somewhat immersive audio.

The original Daddy’s Home from 2015 had step-dad Brad (Will Ferrell) being constantly upstaged by biological father Dusty (Mark Wahlberg), who had all but abandoned his children and ex-wife Sara (Linda Cardellini) several years ago, now wanting back in the picture and hoping to get his family back at all costs. It was an unfunny premise that was more mean-spirited than heart-warming family comedy, yet by the end the two dads make amends and agree to allow each other to be father figures to their kids.

As successful as the first film was at the international box office ($242 million, Ferrell’s highest-grossing film to that point), did the movie-going public really demand a sequel? Paramount Pictures apparently thought so, and the end of 2017 brought us Daddy’s Home 2, which ups the Daddy quota by bringing in Mel Gibson and John Lithgow as the fathers of the two dads. Kurt (Gibson) plays the womanizing, mean-spirited father that was never there to Dusty. Don (Lithgow) is the ever-loving father to Brad, who arrives at the airport alone without his wife, claiming she had to stay home to take care of her suddenly ill brother. It’s quite obvious (as so much is in this “movie”) that something is wrong with Don, and low and behold, nearly three-quarters of the way through, that something is revealed quite painfully. And that pretty much sums up what Daddy’s Home 2 is, painful. The film wants to be a heartwarming family Christmas comedy, often trying too hard, but often failing dismally by being too contrived and cynical with its unsympathetic characters (save for perhaps Linda Cardellini’s Sara), and desperately tries to give us a heartwarming, feel-good ending where everyone, after trying to leave for home by going their own ways, are stranded at a crowded movie theater during a snow storm. Instead, we get an uninspired musical number and some questionable incest jokes. Trust me, stay far away from this Christmas turkey.

Daddy’s Home 2 was captured primarily on the Arri Alexa (which has a maximum resolution of 2.8K) with some sequences captured on the RED Weapon at up to 8K, and was likely completed as a 2K digital intermediate. Paramount’s 4K UHD Blu-ray presents the film in an upscaled 2160p transfer which opens up the image to 1.78:1 (the theatrical aspect ratio is listed as 1.85:1) and has been processed with high dynamic range using Dolby Vision. The disc played back in HDR10 on my non-DV equipment. There is a slight uptick in fine detail, revealing more intricate textures such as in the knitted sweaters and caps worn throughout much of the film. Colors are more natural, particularly the red blouses worn by Sara, which appeared to bloom on the included 1080p Blu-ray. Where this disc really shines, though, is in the more controlled contrast courtesy of the high dynamic range processing, particularly in whites, which were often blown-out on the Blu-ray. Snow-filled backgrounds are much clearer, the blouse on the school principal during the Christmas program has more of a sheen in UHD.

The 4K UHD Blu-ray contains the same Dolby Atmos track that can be found on the included 1080p Blu-ray. Dolby Atmos, in a comedy such as this one, you ask? I listened to portions of the film in both 5.1.2 Atmos and 5.1 TrueHD, and the Atmos was much more spacious and expansive, with more seamless panning between channels. Heights are used to help expand the music as well as atmospheric effects, with a few more obvious uses such as the runaway snow blower and crashing cell tower. This track proves that Atmos doesn’t have to be relegated to big, loud blockbusters (I just wish this were a better movie).

All of the self-congratulatory extras can be found on the included 1080p Blu-ray edition of the film.

Captain Sully (1080p; 2:17): I cannot believe this distinguished hero agreed to make a cameo in this movie.

Digital Copy Daddy’s Home: An insert contains a code to redeem a digital copy of the first Daddy’s Home through ParamountMovies.com and viewable on Vudu. Code expires 5/20/2018.

Digital Copy Daddy’s Home 2: An insert contains a code to redeem a digital copy of Daddy’s Home 2 on both UltraViolet and iTunes. Code expires 2/20/2020.

Daddy’s Home 2 is a waste of talent and time, an infrequently humorous attempt at a family Christmas film that is neither heartwarming nor charming. Although the 4K UHD Blu-ray from Paramount does boast a nice, colorful video transfer and somewhat immersive audio. 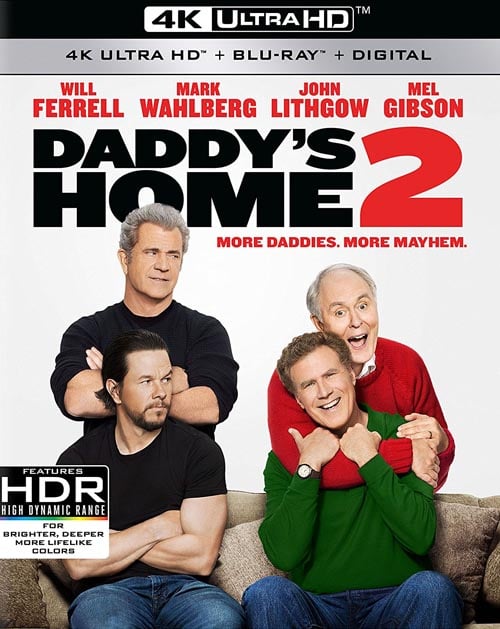