The usual slasher nonsense with a killer doll 2.5 Stars

With its seventh entry in the murderous doll franchise, Don Manicini’s Cult of Chucky certainly has exhausted whatever novelty and gory fun the idea of a slasher doll come to life may have once had.

With its seventh entry in the murderous doll franchise, Don Manicini’s Cult of Chucky certainly has exhausted whatever novelty and gory fun the idea of a slasher doll come to life may have once had. This time out, there are three Chuckys on the prowl and with most of their victims scoffing at the very idea of a toy that can kill, there isn’t much resistance to prevent these heinous creatures from doing as they please. Cultists of the franchise may squeal with glee at another entry, but the rest of us have to settle for the paltry pleasures of a striking production and good actors doing what they can with the lame material.

After four years of enduring electroshock therapy attempting to bring her back from the brink of insanity in which she was convinced she had murdered a number of people actually offed by Chucky, Nica (Fiona Dourif) is transferred to a state run facility under the care of soft-spoken Dr. Foley (Michael Therriault). Her group therapy sessions don’t go well, however, when she’s verbally assaulted by the assertive Claire (Grace Lynn Kung) but is particularly disturbed when the doctor brings out a Chucky doll trying to convince Nica that a living, murderous doll is a delusion within her own mind. But it isn’t long before the Chucky doll (voice by Brad Dourif) begins stalking the hallways looking for victims, all the staff and patients he plans to kill before finally getting to Nica. A second Chucky arrives at the hospital courtesy of Tiffany Valentine (Jennifer Tilly), and ultimately a third, short-haired version also comes by mail preceding the arrival of Chucky’s original owner Andy Barclay (Alex Vincent) who has seen news reports on television about the murders at the mental hospital and realizes who the culprit is.

Director Don Manicini’s screenplay has numerous plot lapses (why do no staff members start to wonder why deaths begin happening once a Chucky doll arrives at the facility, why would Andy’s assaulting a guard get him sent to the mental hospital instead of to jail, why does Chucky who can possess human beings at will continue to operate within a doll body) that viewers must ignore not to find the entire enterprise one big sham. Mancini’s direction is filled with lazy jump scares that are the weakest kind of fright tropes (and he manages to sneak in an unnecessary sex scene and some lesbian-tinged smooching along the way, too), but for every one of those tiresome ploys, he partially redeems himself with some chic direction that proves his mettle (an evocative shadow of Chucky growing larger on the hospital wall is a particularly vivid moment). The entire hospital set is quite unsettling: a white, chrome, hermetic institution with only the doctor’s office which offers a refuge from all that clinical white (but the white makes a great backdrop for all of the blood flow to come). The violence does escalate as the film runs; early kills happen off screen or only in jump cuts, but later murders are ghastly gory and leave nothing to the imagination (the doctor’s demise, admittedly the one murder the viewer is most anticipating after his odious true colors are revealed, is particularly grisly). And never fear, the spirit of Chucky is alive and well at movie’s end ready for yet another installment.

Fiona Dourif gives the performance of the film as Nica, almost convincing us as well as herself that she may be the deranged serial killer she thinks she is, and a late film transformation allows her to play a decidedly different persona for the film’s final scenes. Brad Dourif (Fiona’s real-life father) provides the arresting voice of Chucky, cracking jokes and using intimidation in his best possible malevolent way. Alex Vincent who has been with the franchise from the start as a six-year old seems almost resigned in his performance as the grown-up Andy, taking all of the twists and turns in stride and appearing as if he deserves to be stuck with a battered Chucky head as his only companion. Michael Therriault gives a rather passive performance as the world’s worst therapist Dr. Foley never quite milking his insidiousness for its full measure. Jennifer Tilly seems to be enjoying her brief cameo scenes as the cunning Tiffany Valentine. As patients in the asylum, Grace Lynn Kung as the aggressive Claire, Adam Hurtig as the solicitous Malcolm, and Elisabeth Rosen as the damaged Madeline all make solid impressions. As two nurses with their own agendas, Ali Tataryn and especially Zak Santiago score nicely.

The film’s 1.78:1 aspect ratio is true to its made-for-home video origins (though the movie will get some theatrical releases abroad) and is presented in 1080p resolution using the AVC codec. Sharpness is excellent with the animatronic Chucky’s facial expressions nicely delivered in high definition. Color apart from the opening sequences in a restaurant and in Andy’s home has been desaturated somewhat though the blood is certainly fully and thickly red when it starts flowing. Black levels are outstanding. The movie has been divided into 20 chapters.

The DTS-HD Master Audio 5.1 sound mix uses bass nicely in the various jump scares scattered through the movie. Dialogue has been well recorded and has been placed in the center channel. Joseph LoDuca’s music gets a full surround spread, and atmospheric effects, while not as prominent as they would be in a higher budgeted production, are nicely placed in the fronts and rears.

R-rated/Unrated Versions: the viewer may choose either version to watch from the menu, both running 90 minutes.

Audio Commentary: director Don Mancini and head puppeteer/associate producer Tony Gardner have a genial chat about making the movie and their long-time collaboration. Despite the film’s lapses, these two men are very proud of what they’ve accomplished within the franchise.

Deleted Scenes (5:36, HD): three scenes may be watched separately or in montage and with or without director commentary.

The Dollhouse (7:37, HD): father-daughter teams of Brad and Fiona Dourif and puppeteers Tony and Kyra Gardner discuss their work on the franchise abetted with comments from director Don Mancini and producer David Kirschner.

Fans of the Chucky/Child’s Play franchise may be more enthusiastic about the movie and more forgiving of the lapses found in Cult of Chucky than a casual viewer would be. To be fair, there are a couple of honestly achieved frights amid the cheesy jokes and telegraphed violence, and the Blu-ray certainly offers a top-notch version of the film for Chucky aficionados.

I bought the box set with the first six movies. I realy liked the first three especially the first one , but I felt that the quality went down on the latter entries. I thought the same thing about the Halloween series of films and Nightmare On Elm Street both of which I bought box sets on and watched (or re-watched) in Chronological order. As these series go on and on , it becomes more difficult to maintain the spirit of the original hit film, and the plots become more convoluted and sometimes ridiculous .
Last edited: Oct 1, 2017

I largely liked "Cult". It's not a great film, but I like that it steps away from the goofy campiness that became more dominant through "Seed". 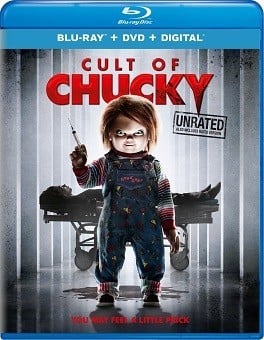