Beginning in 2000, the CSI franchise revolutionized television crime procedurals, but that legacy came to a sad and discomfiting end with the cancellation of CSI: Cyber at the end of its second season.

Beginning in 2000, the CSI franchise revolutionized television crime procedurals, but that legacy came to a sad and discomfiting end with the cancellation of CSI: Cyber at the end of its second season. Never as popular as the three CSI shows which preceded it, CSI: Cyber was the victim of poor scheduling, a cast that didn’t seem to connect well with the audience, and in its second season too great a reliance on personal stories which truncated the cyber investigations at the heart of each episode. Often, those fascinating ways of catching cyber criminals didn’t get the fluid and comprehensive procedural treatment they needed to be riveting because several stories relating to the uninvolving personal lives of the office staff were constantly intruding.

At the start of season two, the FBI’s Cyber Division’s former deputy director has been kicked upstairs (freeing actor Peter MacNicol who had next to nothing to do in season one) allowing Managing Agent Avery Ryan (Patricia Arquette) to take over the operation of the department. Brought in to assist her with a fresh pair of eyes to cyber detection is D.B. Russell (Ted Danson) who due to personal problems and tragedies has been moved from Las Vegas to the Washington, D.C. office to serve as Director of Next Generation Forensics. His forensic science background actually can be put to excellent use in many of the cases which the agents are involved with in the second season though he does get very familiar with computer and network technology more quickly than would be feasible. Otherwise, the division has the same two former black hat hackers Brody Nelson (Shad Moss) and Raven Ramirez (Hayley Kiyoko) working to prevent civilian hacking, Elijah Mundo (James Van Der Beek) as the senior field agent, and white hat hacker Daniel Krumitz (Charley Koontz) who begins to get more and more experience out in the field as the season progresses.

Personally, the lives of the division’s personnel are in turmoil during most of the season. Avery hopes for a reconciliation with her ex-husband (Brent Sexton) who’s on the verge of marrying another woman when a hacker gains access to his personal information and has him declared legally dead. Elijah gets himself a stalker (Molly Burnett) who becomes more and more intrusive into his life as the season progresses. Brody and Raven are secretly dating against the restrictions of their probation as black hats while both of them are hoping to have their records expunged. Krumitz’s character testimony during a trial rather than helping his sister actually ends in sending her to prison. And D.B. finds love again in the person of a former undercover spy (Kelly Preston).

As for the cases, while the disconcerting realization that all of our everyday appliances including fitness bands and hospital heart monitors and GPS signals are capable of being hacked continues to be one of the show’s strengths (which may be why the series never caught on in a big way: people don’t want to be reminded how easily their devices can lead to their ruination), only a few of the episodes really captured the breathless cat and mouse game this FBI division plays with cyber criminals out there. The most exciting of the season’s episodes involves a passenger jet hacked to go off course and be untraceable on the ground while an on-board assassin searches for her would-be target. Avery commits to finding the FBI’s Most Wanted Hacker, a criminal who takes the name Python (Evan Jones) in a compelling story that plays itself out over multiple episodes during the season. There are also stories involving identity theft, faking video footage, a deadly treasure hunt arranged by a pedophile, technology facilitated murder, and a cyber Robin Hood. Every episode focuses on a term familiar to the hacking world so there are stories that revolve around “cyberstalking,” “doxing,” “script kitties,” “modchips,” “malware,” “shelf babies,” “brute force attacks,” “whaling attacks,” “nearfield communication,” “shodar maps,” “QR codes,” “supercookies,” and “legacy footprints.”

Here are the eighteen episodes that are found on five discs in the final season set:

The program is broadcast on CBS in 1080i, and these down-converted 480p transfers are presented in anamorphic 1.78:1. The look of the show mixes the cool blueness from CSI: NY with the hot, oversaturated colors and contrast of CSI: Miami. Thus, skin tones can vary from realistic to overdone, and sharpness varies from crisp to soft (with star Patricia Arquette sometimes favored with glamour shots). Black levels can be very deep and dark, but contrast can vary according to the set where any certain scene is playing out. There is little to no aliasing or moiré problems in these transfers. Each episode has been divided into 6 chapters.

Each episode offers Dolby Digital 5.1 and 2.0 stereo sound mixes. The 5.1 is the equivalent of the network broadcast with dialogue cleanly recorded and placed in the center channel while the music and split sound effects occupy the soundstage fronts and rears in involving and immersive mixes that have long been the hallmarks of the CSI franchise.

Deleted Scenes: nine scenes are spread out over the five discs in the set, paired with the episodes from which they were excised.

Hack My Ride (4:44): producers Craig O’Neill and Pam Veasy discuss what they think of the season’s sexiest episode.

Kelly Osbourne Visits CSI: Cyber (2:24): the actress and fashion maven describes her hacker character in “The Walking Dead,” an episode which borrows heavily from The Usual Suspects. Co-star Charley Koontz whose character helps bring her down also comments.

Behind the Firewall: Season 2 of CSI: Cyber (26:09): producers Craig O’Neill and Pam Veasey along with all of the principal cast describe the personal and professional journeys of all the characters during season two.

Mr. Russell Goes to Washington (10:43): producers Pam Veasey and Craig O’Neill express their delight in having Ted Danson join the show for the second season (though the final episode of the season writes him out of the show had there been a third season). Ted Danson also discusses how his character from the original CSI can fit into these new surroundings.

Pixel Perfect (4:27) director of photography Scott Kevan explains his choices of cyan and gold for the look of the series and the use of rich color and contrast to heighten tension. Producer Pam Veasey also elaborates.

The Sounds of Cyber (9:39): the music and sound departments describe their complex work on each episode. Speaking are composers Ben Decter and Jeff Russo, sound effects supervisor Mike Marchain, and sound editor Russell Gorsky, among others.

The second season of CSI: Cyber marked a sad end to the groundbreaking procedural franchise after a sixteen-year run. While the series had its both personal and professional highlight moments, it never really seemed to jell into a compelling, can’t miss series. These standard definition transfers of the episodes, however, do up-convert quite nicely for fans who want to experience the show’s final season once again. 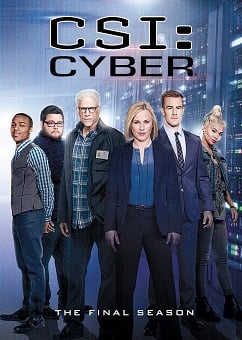