Forum List What's new Dark Style Change width
Log in Register
What's new Search
Menu
Log in
Register
Navigation
Install the app
More options
Dark Style
Close Menu
Posted on March 12, 2021 by Matt Hough
You are using an out of date browser. It may not display this or other websites correctly.
You should upgrade or use an alternative browser.
Exceptional noir mystery has lost none of its considerable power. 4.5 Stars

Edward Dmytryk’s Crossfire works magnificently as both a film noir mystery and as a viable and necessary comment on bigotry and hate that merits further discussion.

A classic film noir that serves as one of the true cornerstones of the entire genre, Edward Dmytryk’s Crossfire presents its story of hatred and prejudice wrapped in a whodunit/why-dunit framework that keeps audience interest at a maximum while deftly offering its sociological points in a fast-paced 85-minute time window. Nominated for five Academy Awards, Crossfire remains one of the most well-remembered thrillers of the early postwar era.

Joseph Samuels (Sam Levene) is beaten to death in his apartment after having been seen in the company of three demobilized soldiers the previous evening: opinionated Montgomery (Robert Ryan), sensitive Mitchell (George Cooper), and submissive Floyd (Steve Brodie). Lead homicide detective Captain Finley (Robert Young) in investigating the murder is initially pointed to Mitchell who had been seen leaving a bar with the murdered man, but Mitchell’s Master Sergeant Keeley (Robert Mitchum) doesn’t believe the young man capable of a murderous beatdown so he begins his own investigation. Before it’s over, a B-girl (Gloria Grahame), her estranged husband (Paul Kelly), Mitchell’s wife (Jacqueline White), and a naïve Tennessee soldier (William Phipps) all become key players in the solution of the mystery.

The Oscar-nominated script by John Paxton (adapted from Richard Brooks’ The Brick Foxhole about a homosexual murder in a wartime barracks, changed to an anti-Semitism theme due to the rigors of the Production Code) won the Mystery Writers of America Edgar Award for the best mystery movie screenplay though, to be honest, the revelation of the guilty party happens around the halfway point of the movie with the real mystery revolving around how Captain Finlay is going to prove the guilt of the culprit. In fact, director Edward Dmytryk actually reveals the murderer’s identity soon after the opening credits; if one is at all familiar with the film’s stars, the silhouette of the killer is easy to spot in the shadows during the murderous brawl that begins the film, and if that doesn’t give it away, occasional slips in speech sprinkled in a couple of early scenes also serve as notable signposts to the murderer’s identity. Yes, it’s a film noir meaning that shadows are especially thick throughout the film’s brisk running time, and Dmytryk also uses very effective low angled shots that make certain characters loom large and menacing in certain key scenes of the picture. Likewise, in Mitchell’s drunken memories of the prior evening, the camera goes in and out of focus, sometimes offering double exposures to reflect his questionable recollections and keep him as a prime suspect for a lengthy period of time despite his milquetoast manner and relatively morose demeanor. Dmytryk also finds a way to keep Robert Young’s excessively lengthy climactic monologue interesting as he details the menaces of prejudice and its insidious ability to touch many different kinds of people who one might think were ordinarily immune. 1947’s Gentleman’s Agreement may have attacked the perils of anti-Semitism more directly, but Crossfire scores its own condemnation with just as forceful and dynamic a punch.

The film’s three top-billed Roberts: Young, Mitchum, and Ryan each scores in his own individual way with the character being played: Young with thoughtful calm and restraint, Mitchum with laid back cool and directness, and Ryan with a smoldering force barely contained within a polite outward demeanor. (Ryan earned the film’s sole male acting Oscar nomination). Gloria Grahame shines as a proud floozy with a short temper and a dislike of cops (she also scored an Oscar bid), and Paul Kelly in a couple of scenes sends shivers up the spine with his needy, rage-filled confusion over his wife’s disinterest. William Phipps plays the Tennessee hayseed quite well without exaggerating the mannerisms, and Sam Levene is heartbreakingly kind as the murdered man seen in flashbacks as various suspects relate what they know about the night of the crime. George Cooper doesn’t have much screen presence as the pitiable Mitchell while Jacqueline White scores nicely as Mitchell’s concerned wife more interested in clearing her husband of murder charges than getting to the bottom of his encounter with Grahame’s bargirl. Yes, that’s Richard Benedict and Lex Barker in smaller roles as soldiers trying to protect their buddy during the police investigation.

The film has been framed in its theatrical aspect ratio of 1.37:1 and is presented in 1080p using the AVC codec. The grayscale is terrific as blacks are rich and dark and shadows endlessly menacing and effective. Sharpness is first-rate throughout (except when things are deliberately unfocused or faces jam themselves into the camera lens and are thus distorted). The image is immaculate with no signs of age-related anomalies. The movie has been divided into 30 chapters.

The DTS-HD Master Audio 2.0 sound mix offers an enjoyable, age-appropriate monaural soundstage with well-recorded dialogue, Roy Webb’s background score, and the appropriate sound effects all blended together into a single track. There are no problems with hiss, crackle, pops, or flutter.

Audio Commentary: a 2005 commentary featuring noir film historians James Ursini and Alain Silver has been ported over from the DVD release. The two men trade off back-and-forth with comments on the film, the stars, and the director Edward Dmytryk whose pre-recorded comments are interspersed with their own throughout the track.

Crossfire: Hate Is Like a Gun (8:58, SD): a short extolling the virtues of the movie is punctuated with comments from director Edward Dmytryk.

Edward Dmytryk’s Crossfire works magnificently as both a film noir mystery and as a viable and necessary comment on bigotry and hate that merits further discussion. The Warner Archive Blu-ray release is exceptionally effective and comes highly recommended!

A great film so I'm looking forward to my Blu-ray. With that said, I wish Eddie Muller did a commentary or even Imogen Sara Smith before Silver and Ursini, who I found boring lately with their commentaries. Anyhow, thanks for the fine review.

Amazon just sent me an email that my BD won't arrive until some time in April.

Robert Crawford said:
Amazon just sent me an email that my BD won't arrive until some time in April.

Argh! I'm sorry. It's really a beautiful transfer. You'll get it eventually, and you're sure to enjoy it. I also agree about the commentary. The two guys are OK, but I'd rather have heard Eddie for the length of the film.

I've never found anything wrong with "Robert Young’s excessively lengthy climactic monologue" although many other people have complained that it's a preachy author's message. I love this film and I'll be upgrading to the Blu-ray disc even though the DVD is pretty good.

Matt Hough said:
Argh! I'm sorry. It's really a beautiful transfer. You'll get it eventually, and you're sure to enjoy it. I also agree about the commentary. The two guys are OK, but I'd rather have heard Eddie for the length of the film.
Click to expand...

It's all good as I have so many movies and show to watch in the meantime, I can be patient enough to eventually watch this great looking Blu-ray.

Thanks for the fine review, Matt. I am glad to read that Warner Archive has done its usual excellent job with the transfer. I will definitely be picking this up down the road as an upgrade to the DVD. It's a terrific film with a great cast.

Robert Crawford said:
Amazon just sent me an email that my BD won't arrive until some time in April.

Guess what, my BD arrived from Amazon today, March 18th.

I finally watched my BD and I concur with this review about the video presentation of this disc.
You must log in or register to reply here. 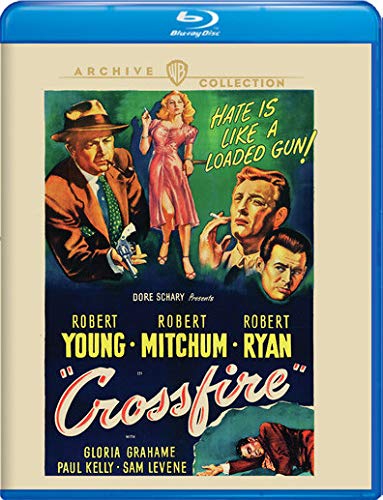