Forum List What's new Dark Style Change width
Log in Register
What's new Search
Menu
Log in
Register
Navigation
Install the app
More options
Dark Style
Close Menu
Posted on February 25, 2018 by Kevin Collins
You are using an out of date browser. It may not display this or other websites correctly.
You should upgrade or use an alternative browser.
I'm hoping that this is not a doubling-up of something another poster has already done this year, but I hunted through the posts back to New Year's and didn't see one yet. 3 Stars

I’m hoping that this is not a doubling-up of something another poster has already done this year, but I hunted through the posts back to New Year’s and didn’t see one yet. I missed last year’s list for sundry work reasons, but have a minute to indulge in this for the current year. Revisiting my prior lists, regardless of reality, and noting that some of the items from the last couple of years actually have been picked up, just not by Criterion.

3. Kubrick’s Lolita (I have this feeling Criterion is going to continue making their way through the Kubrick catalogue, and this one feels like a proper next step to take…)

4. Bird (a full-on expanded Criterion examination of this film, and of Charlie Parker)

5. Adaptation4. Popeye (Yes, the Altman one. Just for the bonus features…)

6. David Mamet 3-pack (House of Games, Homicide as upgrades, plus Things Change as a new Criterion)

7. The Magnificent Ambersons (carrying over the bonus material from the laserdisc) – upgrade from laserdisc (and to honor Larry Granberry – also including an archival copy of the lost director’s cut from Rio – assuming one is ever found…)

13. The Sugarland Express (yes, a bare bones edition was made available by Universal – I’d like to see something far more in depth…)

14. The Day After (providing a good HD transfer and a new commentary with Nicholas Meyer – restoring the audio for the ending)

16. The Man in the Glass Booth

24. The Year of Living Dangerously

26. Secrets & Lies (Mike Leigh film – and I think this one is coming this year – it was included in the Filmstruck Criterion area with the Criterion logo…)

We’re in a different place now, where there isn’t nearly as much material being released on disc as in even the recent past. I’m grateful that Criterion continues to soldier ahead, and that Shout!, Twilight Time and even Kino Lorber at times have been able to bring attention to some interesting titles. No Highway in the Sky at least got a good look from Kino, and several titles that interested me over the years found purchase at Twilight Time. Criterion for its part surprised me with Barry Lyndon last fall, and pleasantly surprised me by revisiting The Breakfast Club with all the materials I had noted were missing from the Universal releases.

Like to see on blu-ray The Magnificent Ambersons, Andrei Rublev, Antonio Gaudi, And The Ship Sails On, Two English Girls and I think will happen soon Dersu Uzala which was shown on TCM a few days ago with the Janus logo.

I would love to see Brando’Burn on Blu
A

Upgrades
Heaven Can Wait (1943)
Trouble in Paradise (1932)
My Man Godfrey (1936)
W.C. Fields shorts
Josef von Sternberg silents (with the Gaylord Carter scores for The Docks of New York and The Last Command included this time)

Bernard McNair said:
I would love to see Brando’Burn on Blu
Click to expand...

The complete Burn! (Queimada),not the butchered version released in the USA.

I've had Goodbar on my radar before, but didn't list it as there was a discussion about it here a couple of weeks ago, I think.
The upshot is that all the pop songs on the soundtrack would need to once again be licensed, and nobody is willing to pay that number for what will be a niche title. Granted, my list includes forcing someone to go to Rio to get the fabled full cut of Magnificent Ambersons, but somehow that seems more possible than Paramount or anyone else ponying up the dough for a bunch of 70s songs in 2018...

Upgrades to Fiend Without A Face, Equinox,The Devil and Daniel Webster and Thief of Bagdad..
Id love And Then There Were None to replace the VCI release
In all honesty Id be all for any title that I have in my collection to get a Criterion release this year or any year for that matter, of course many of my wishlist aren't too likely...but to name some anything from Tomorrow At Seven to It Conquered the World to Devil Girl From Mars to Kronos to Will Penny to any Wallace/Mabuse/Krimi films to The Thin Man Series, Charlie Chan, Mr. Moto, The Land Unknown,Dr. X, The Narrow Margin, Gaslight, The Kennel Murder Case,The Seven Faces of Dr. Lao, Tarantula, Match Point, InfraMan, X the Unknown, Martin, Angel Face, The First Deadly Sin, The Late Show, Pilot X, The Set-Up, Gun Crazy, Rain, Berserk, The Major and the Minor, The Letter, Now Voyager, Plan Nine From Outer Space, The Brainiac,The Trial, Detour, DOA, Angel on my Shoulder, The Glass Key, the Big Clock, Alligator, The Locket, etc etc x 1000

The Cook, the Thief, His Wife & Her Lover

A Matter of Life and Death (the 2017 digitally restored version)

The Scarlet Pimpernel from 1934

The Wonderful World of the Brothers Grimm

The Victors...restored to it's 170 minute Roadshow version with Overture.

The Heiress..with an option for Aaron Coplands complete score with the film. If not Criterion then Universal.

I'd have to second the Mosquito Coast and the Year of Living Dangerously. I'd add Peter Weir's Gallipoli, Matewan, and one that would be extremely interesting supplement wise (I think) is Klaus Kinski's Jesus Christus Erloser. Another interesting title that I don't think has had a proper American release is Alain Cavalier's L'Insoumis (aka The Unvanquished, aka Have I the Right to Kill?)
Last edited: Feb 18, 2018
K

skylark68 said:
I'd have to second the Mosquito Coast and the Year of Living Dangerously. I'd add Peter Weir's Gallipoli,
Click to expand...

I'll third and second those!

It's been rumored for years that they would be releasing King Hu's martial arts spectacle, DRAGON INN (1967), but I'm still waiting. It was restored and shown theatrically in 2016, when I saw it at Lincoln Center. I consider it Hu's best film. I recently saw Hu's LEGEND OF THE MOUNTAIN (1979), which was digitally restored by its lead actress, Hsu Feng! It played at the Metrograph in New York and is rumored to be an upcoming Criterion release. Here's hoping. 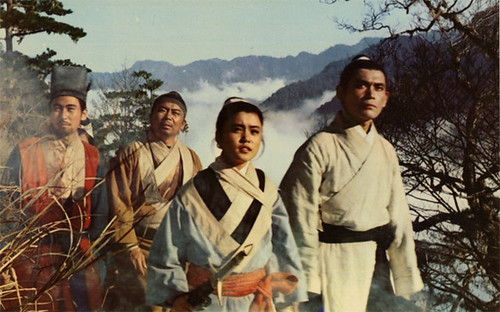 Looking for Mr. Goodbar
Rome 11:00
The Mystery of Oberwald.

Not that I'm expecting any of these.

I wouldn't mind an upgrade of Green for Danger.

With the upcoming release of Ken Russell's WOMEN IN LOVE, how about teaming up with BFI again for a remastering and Blu-Ray release of THE MUSIC LOVERS. Stunning visuals and great soundtrack, thanks to Andre Previn and the London Symphony Orchestra.

I'd love to see Criterion work with WB on their silents and animation.

Any Powell & Pressburger is an instant buy for me.

Getting back StudioCanal titles from Lionsgate would be monumental.
You must log in or register to reply here.