Forum List What's new Dark Style Change width
Log in Register
What's new Search
Menu
Log in
Register
Navigation
Install the app
More options
Dark Style
Close Menu
Posted on November 17, 2021 by Ronald Epstein
You are using an out of date browser. It may not display this or other websites correctly.
You should upgrade or use an alternative browser.
View media item"> 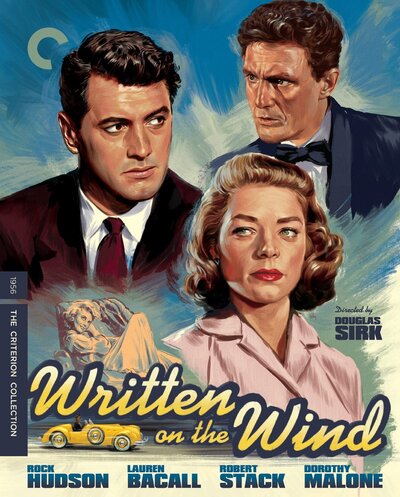 Douglas Sirk’s Technicolor expressionism reached a fever pitch with this operatic tragedy, which finds the director pushing his florid visuals and his critiques of American culture to their subversive extremes. Alcoholism, nymphomania, impotence, and deadly jealousy—these are just some of the toxins coursing through a massively wealthy, degenerate Texan oil family. When a sensible secretary (Lauren Bacall) has the misfortune of marrying the clan’s neurotic scion (Robert Stack), it drives a wedge between him and his lifelong best friend (Rock Hudson) that unleashes a maelstrom of psychosexual angst and fury. Featuring an unforgettably debauched, Oscar-winning supporting performance by Dorothy Malone and some of Sirk’s most eye-popping mise-en-scène, Written on the Wind is as perverse a family portrait as has ever been splashed across the screen.

I was waiting for this!
The cover seems a bit too busy though...

Finally! I'm all over this one.

The old cover was way better.

Also yeah Criterion really took their damn time bringing this to blu. Wonder if the elements were crapola?
G

Also yeah Criterion really took their damn time bringing this to blu. Wonder if the elements were crapola?
Click to expand...

Love the artwork for the cover, looks like one of the actual posters made when the film originally came out.

Finally! Long overdue! I prefer the new jacket to the old one but wonder why Dorothy Malone isn't as prominently featured as her three other co-stars? After all, she is the one who won the Oscar!
Last edited: Nov 15, 2021

You were the FIRST person I thought of!

I really like the French release but I'm totally going to upgrade (providing this one's better, which is likely!)

Well, no one has mentioned this yet, so I'm lobbing a big kvetch about the extras.

Why oh why are what I consider some of the most interesting extras on the DVD--the Melodrama Archive, the Trailer & the Laura Mulvey essay, which I've re-read many times, and each time get a new insight--not on the Blu-Ray?

Yes, I know, these extras which originally appeared in the Criterion DVD are SD, but this never seemed to stop Criterion from doing this before. And the Laura Mulvey essay would mean additional paper, like maybe a stapled booklet instead of that skimpy insert, which often comes out of the package mottled and wrinkled, with tiny type that, considering my age, I am finding difficult to read. But is Criterion really becoming so miserly? Are they really in that bad financial shape that they are now placing different extras on the DVD and Blu-Ray, in a ploy to get people to buy both? I mean, at a RSP of $39.95, you would think they would want to give customers who already have the DVD an additional incentive to buy it again.

And yes, I already have them on that ancient DVD, but it would be nice to have them all in one place. Criterion has always done this before when they reissue stuff on Blu, so why not now?

And finally, seeing that this is one of my favorite films which I've been dying to get on Blu-Ray, I might consider getting this day one. But with this cheese-sparing cheapness about the extras, which leaves a sense of desperation, or worse, on Criterion's part, I'll wait for a sale.

I don’t profess to know a lot about aspect ratios, but I was curious to see if there is any major difference between my DVD and Blu-ray copies of this film.

I’ve had the R2 7 DVD box-set “Directed by Douglas Sirk” for a few years now. It was released in the UK and “Written On The Wind” was included. A very enjoyable set, and well worth having, but has no extras except a 16 page booklet.

The Blu-ray Region B I purchased here from my local JB HiFi store for $6.98 AUD (around US$5) is a real bare bones release through Shock Australia. No menu, no extras – the film plays straight up. Again, poor old Dorothy Malone gets short-changed on the cover art.

Attached are comparison photos I have taken off my LG 55 inch 3D 4K TV playing both discs via my Sony 3D Blu-ray player.

The Blu-ray with the same opening shot has black bars top and bottom.

There are two photos of the main title using the DVD info display button, then the Blu-ray in display.

There’s a slight difference in the framing (and the color grading), but my understanding is that my Blu Ray has the correct AR of 2.0:1. I'd be curious to see the Criterion AR version of the opening shot.

Reminder that this film was shot open matte so you're not gaining anything from 2.00:1

As I'm not a Criterion fan boy, I don't expect this disc to be an improvement over the French disc I bought eighteen months ago. I'll probably re-watch that in the next few days.

That Elephant disc was a bit washed out from the caps I've seen (Sirk Technicolor is supposed to be L-U-R-I-D people). We'll see if Criterion keeps that grade or goes for the full effect.

Lord Dalek said:
Reminder that this film was shot open matte so you're not gaining anything from 2.00:1
Click to expand...

In 1956 everything was being shot in widescreen even some theatrical cartoon shorts such as Tom & Jerry and Droopy. The only films not shot in wide where really bad B/C/D movies and some International films as well.

darkrock17 said:
In 1956 everything was being shot in widescreen even some theatrical cartoon shorts such as Tom & Jerry and Droopy. The only films not shot in wide where really bad B/C/D movies and some International films as well.
Click to expand...

I don't think Lord Dalek is disputing Written On The Wind was intended to for wide screen exhibition but rather the aspect ratio of 1.85 versus 2:1.

Has any other Oscar-winning performance been as over the top as Malone's? It really has to be seen to be believed. I even burst out laughing at her first appearance during the opening credits.

(And yes, her performance is technically inept -- wincing before a "surprise" slap in the face, and steering left and right while the rear projected background shows a straight road behind her -- but that's all part of the fun.)

As icing on the cake, the ending rivals NORTH BY NORTHWEST for its phallic fabulousness.

RichMurphy said:
Has any other Oscar-winning performance been as over the top as Malone's? It really has to be seen to be believed. I even burst out laughing at her first appearance during the opening credits.

(And yes, her performance is technically inept -- wincing before a "surprise" slap in the face, and steering left and right while the rear projected background shows a straight road behind her -- but that's all part of the fun.)

As icing on the cake, the ending rivals NORTH BY NORTHWEST for its phallic fabulousness.
Click to expand...

How can you not see a hand coming toward your face. Alas, I've been slapped in the face more than once and you'd better believe I winced when I saw that coming! All the performances in Sirk's melodramas (with the possible exception of The Tarnished Angels) are stylized with a heightened reality. Very few actresses are as carnal as Dorothy Malone and her Marylee Hadley may as well have, "F*ck Me!" tattooed on her forehead. But there's a sad eyed quality to Malone that shows she finds no real pleasure in her debauchery. The irony, of course, is that she's pining away for a man who's not worthy of her. Hudson and Bacall deserve each other! Malone's Marylee wears her emotions on her sleeve whether it's pain, sadness or anger. A contrast to the uptight Bacall (her character, not the actress). One of the rare occasions where the Academy got it right.
You must log in or register to reply here.