Forum List What's new Dark Style Change width
Log in Register
What's new Search
Menu
Log in
Register
Navigation
Install the app
More options
Dark Style
Close Menu
Posted on July 17, 2021 by Ronald Epstein
You are using an out of date browser. It may not display this or other websites correctly.
You should upgrade or use an alternative browser.
View media item"> 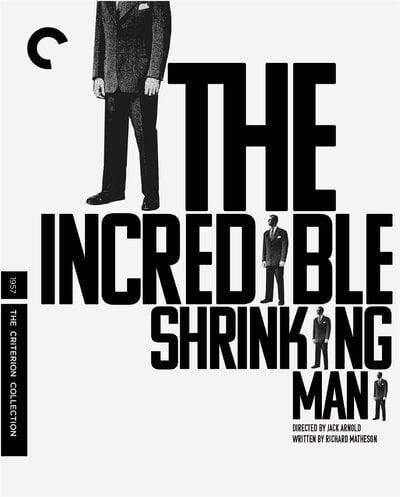 Existentialism goes pop in this benchmark of atomic-age science fiction, a superlative adaptation of a novel by the legendary Richard Matheson that has awed and unnerved generations of viewers with the question, What is humanity’s place amid the infinity of the universe? Six months after being exposed to a mysterious radiation cloud, suburban everyman Scott Carey (Grant Williams) finds himself becoming smaller . . . and smaller . . . and smaller—until he’s left to fend for himself in a world in which ordinary cats, mousetraps, and spiders pose a mortal threat, all while grappling with a diminishing sense of himself. Directed by the prolific creature-feature impresario Jack Arnold with ingenious optical effects and a transcendent metaphysical ending, The Incredible Shrinking Man gazes with wonder and trepidation into the unknowable vastness of the cosmic void.

Very tempting. Weaver always does a good commentary. The cover art is clever but doesn’t grab me.

Another purchase even though I have two earlier Blu-ray releases from the UK and Germany.

Yeah, all the extras look good and for a modern-day disc, they're quite plentiful. Joe Dante and Dad Gould are very knowledgeable about these movies. Ben Burtt and Craig Barron certainly know their stuff. And the Ballyhoo documentary on Arnold's Universal career (he did the best of Universal's 50's sci-fi movies) sounds outstanding.

As this haunting film has always been one of my personal favorites, I don't know why I never got around to ordering the Blu-ray from Europe, but I didn't, and now I'll just hope to enjoy this release with these wonderful bonus materials.

Will be good to update from my DVD.

Why do these 4K restorations if they aren’t released in 4K?
Is it necessary?

Be careful using that "restoration" word.

Yeah I know. I’m just copying what it says in the description up there.

I think Robert Harris said that reasons for the different K's is that some films can't be restored at the higher number due to the condition the film's original camera negatives are in.

I've assumed that studios are largely doing 4K transfers for the future (downloads, streaming, TV or possible UHD) and the Blu-ray just gets the most recent albeit dumbed down transfer.

A buy only if a reasonable uptick in image quality from previous releases.

Not to mention the words "digital" restoration.

They're done to create digital masters that can be used for everything across the board - theatrical screenings, streaming, television. Physical disc releases are an afterthought at this point.

I have the Arrow release but I am 99% sure Im getting this, and anticipate Criterion improving upon it. But will also read reviews (from reputable reviewers) just to make sure it really is an upgrade.
T

Robert Crawford said:
Another purchase even though I have two earlier Blu-ray releases from the UK and Germany.
Click to expand...

Robert,
How do the releases from UK and Germany look?

Just to confirm, this is not about a naked dude jumping into a pool full of ice ?
You must log in or register to reply here.

Saturday at 1:41 AM
Derrick King