Forum List What's new Dark Style Change width
Log in Register
What's new Search
Menu
Log in
Register
Navigation
Install the app
More options
Dark Style
Close Menu
Posted on August 18, 2018 by Ronald Epstein
You are using an out of date browser. It may not display this or other websites correctly.
You should upgrade or use an alternative browser.
3 Stars 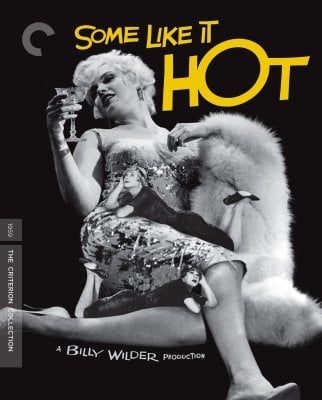 One of the most beloved films of all time, this sizzling masterpiece by Billy Wilder set a new standard for Hollywood comedy. After witnessing a mob hit, Chicago musicians Joe and Jerry (Tony Curtis and Jack Lemmon, in landmark performances) skip town by donning drag and joining an all-female band en route to Miami. The charm of the group’s singer, Sugar Kane (Marilyn Monroe, at the height of her bombshell powers) leads them ever further into extravagant lies, as Joe assumes the persona of a millionaire to woo her and Jerry’s female alter ego winds up engaged to a tycoon. With a whip-smart script by Wilder and I. A. L. Diamond, and sparking chemistry among its finely tuned cast, Some Like It Hot is as deliriously funny and fresh today as if it had just been made.