Forum List What's new Dark Style Change width
Log in Register
What's new Search
Menu
Log in
Register
Navigation
Install the app
More options
Dark Style
Close Menu
Posted on February 17, 2022 by Ronald Epstein
You are using an out of date browser. It may not display this or other websites correctly.
You should upgrade or use an alternative browser. 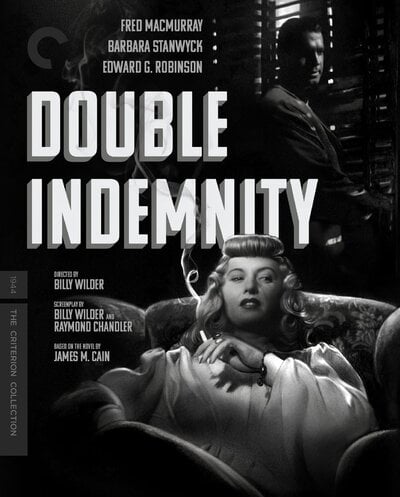 Has dialogue ever been more perfectly hard-boiled? Has a femme fatale ever been as deliciously evil as Barbara Stanwyck? And has 1940s Los Angeles ever looked so seductively sordid? Working with cowriter Raymond Chandler, director Billy Wilder launched himself onto the Hollywood A-list with this paragon of film-noir fatalism from James M. Cain’s pulp novel. When slick salesman Walter Neff (Fred MacMurray) walks into the swank home of dissatisfied housewife Phyllis Dietrichson (Stanwyck), he intends to sell her insurance, but he winds up becoming entangled with her in a far more sinister way. Featuring scene-stealing supporting work from Edward G. Robinson and the chiaroscuro of cinematographer John F. Seitz, Double Indemnity is one of the most wickedly perverse stories ever told and the cynical standard by which all noir must be measured.

I'm all over this 4K release.

Oooooof this sounds badass. Don't think I can justify upgrading the Blu-ray since Universal's release is strong and I'm not UHD-ready yet, but this could be one I grab in 4K in anticipation of the eventual upgrade.

Interested, though not an obvious choice for a 4K upgrade. At least it's a honey of a film.

Mark VH said:
Oooooof this sounds badass. Don't think I can justify upgrading the Blu-ray since Universal's release is strong and I'm not UHD-ready yet, but this could be one I grab in 4K in anticipation of the eventual upgrade.
Click to expand...

It includes "two Blu-rays with the film and special features" so you can call it "future-proofing" or "double indemnity" if you must !

Since this film is in the same boat as Citizen Kane asset wise, I'm not sure how this is going to turn out.
P

I've been meaning to buy the original Universal-distributed Blu-ray of this for years and never got around to it out of pure laziness. Apparently this is one of those rare situations rare my laziness is about to pay off.

I will get this for sure.

The chances of me going 4K in the future feel so remote that I will probably just go with the Blu-ray version. But I am really glad Criterion is releasing this and will be delighted to finally correct an omission in my collection with their edition.

I'm guessing this is why it was never announced by Kino.

I’ll have to check the bonus features in the le Blu but I’m probably going to get this anyway and just combine the discs. It’s a shame though, I won’t be able to use the DVD package clamshell. It was very nice!

Lord Dalek said:
Since this film is in the same boat as Citizen Kane asset wise, I'm not sure how this is going to turn out.
Click to expand...

During the recent Dead Pixel Podcast (an interview with LOC's Heather Linville and George Willeman) Lee Kline mentioned that they found the best elements for Double Indemnity were held by the BFI. Obviously he didn't go into detail as the title had yet to be announced.

A conversation with two of the best commentators in the business, Eddie and Imogen, would have to be one of the primest reasons for buying this release.

I'm going to get this to make up for procrastinating on getting the Universal BD.
D

I am wondering if the other Universal property they're still hanging onto for later better quality release is Midnight? Nowhere near as well known as the Wilder of course.

Apropos of nothing, I remember it taking forever for this movie to reach standard def DVD and being absolutely elated when it did. 16 years later, here we are with a Criterion 4K and Blu-ray version, and I'm only mildly excited for them. Life moves pretty fast.
C

me too !! I want this release NOW ...BRILLIANT Criterion....Thank you.

That little man inside
You must log in or register to reply here.