Posted on July 30, 2016 by Todd Erwin
Departure for Costner, but not necessarily a good one. 3.5 Stars

Criminal does the “transfer a dead man’s brain into a living person” genre better than most, but it’s still a rather silly premise that ultimately takes itself too seriously. Kevin Costner passed on the leading role in this film several times, and he should have stuck with his gut instinct.

CIA agent Bill Pope (Ryan Reynolds) is in the midst of making a deal with “The Dutchman,” a hacker who has created a wormhole that exposes the world’s nuclear defense codes. He has agreed to turn himself in in exchange for $10 million and guaranteed protection from anarchist Xavier Heimdahl (Jordi Molla), the man he created the wormhole for. But Heimdahl catches Pope before the exchange, torturing and eventually killing him. With the clock ticking, Quaker Wells (Gary Oldman), the head of operations for the CIA’s London office, contacts Dr. Mahal Franks (Tommy Lee Jones), who has been working on transplanting memory patterns from one body to another, to conduct the first human trial. Dr. Franks’ choice is Jericho Stewart (Kevin Costner), a career criminal with severe psychological issues due to an underdeveloped frontal lobe caused by head trauma as a child. Jericho is being held at a maximum security prison, caged and leashed like an animal, and is sedated before Dr. Franks transports him to London for the operation, transplanting Pope’s last memories to Jericho in hopes of finding “The Dutchman” before he turns himself into the Russians or Heimdahl finds him. After the surgery, Jericho claims he can’t remember anything, but manages to escape while transporting him back to the airport. On the run, Jericho begins to have flashbacks of Pope’s life, leading him to Pope’s house, and confronting his widow, Jill (Gal Gadot) and daughter, Emma (Lara Decaro). This brings more flashbacks, where Jericho soon learns that somewhere in London, behind a shelf of books by George Orwell, there is a bag filled with $10 million for the taking. The CIA, the Russians, and Heimdahl are on the trail of Jericho, who is becoming confused as to his identity, with Pope’s memories and feelings meshing with his own, and begins to complete Pope’s mission.

One of the many problems with Criminal is its overstuffed screenplay by Douglas Cook and David Weisberg (The Rock), with too many plots going on at the same time and underwritten characters (particularly Jones’ Dr. Franks, Oldman’s Wells). Gal Gadot (who was cast as Wonder Woman just as this film was going into production) has the thankless role as the widow, who at first fears Jericho (and rightfully so), but very quickly allows him to hideout in her home with her daughter as she begins to see her recently dead husband in Jericho. Costner does what he can with the material (in the making-of documentary, we learn that he turned down the role originally, more than once), slowly bringing some humanity to Jericho as he begins to tap more into Pope’s memories. The movie asks quite a lot from the audience, far beyond the high concept premise of memory transferring, that would come off as spoiler if included in this review.

Shot digitally on the Arri Alexa and RED Epic, it should come as no surprise that Criminal looks as good as it does in this stunning 1080p transfer, compressed using the AVC codec, and retaining the movie’s theatrical aspect ratio of 2.40:1. Colors are consistent and natural, occasionally leaning towards browns as a stylistic choice. Detail is excellent, sometimes too good, showing us how much Tommy Lee Jones and Kevin Costner have aged with their visible wrinkles and Costner’s stubble. Contrast is also very good, with deep blacks that have no noticeable crush and bright whites that don’t clip.

Criminal arrives on Blu-ray with a DTS-HD Master Audio 5.1 track that can be very active at times, with various sounds panning around the room. Dialogue is clear, directed mostly to the center channel, never getting lost in the mix. Dynamic range and fidelity are quite good, and the track has a sonically sound LFE presence.

Criminal Intent (1080p; 40:03): A three-part documentary on the making of the film, featuring interviews with the cast, the writers, director Ariel Vromen, composer Bryan Tyler, and the myriad of producers.

DVD Copy: The movie in 480p with Dolby Digital 5.1 audio and all of the same special features listed above.

Although Kevin Costner takes a chance playing a much darker character than he’s portrayed in the past, there’s just too much going on to make sense of its high concept premise. For those few that enjoyed the film theatrically, the audio and video on the Blu-ray edition are of very high caliber. 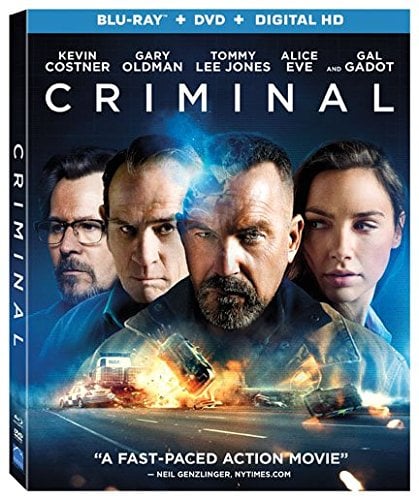