Forum List What's new Dark Style Change width
Log in Register
What's new Search
Menu
Log in
Register
Navigation
Install the app
More options
Dark Style
Close Menu
Posted on March 6, 2019 by Sam Posten
You are using an out of date browser. It may not display this or other websites correctly.
You should upgrade or use an alternative browser.
I was afraid I couldn't live up to the expectations. 3.5 Stars

Rocky’s (Sylvester Stallone) protege Adonis Creed (Michael B. Jordan) caps his meteoric rise and becomes the heavyweight champion. Creed settles in to cement his career while building his relationship with his girlfriend Bianca (Tessa Thompson). From out of the shadows steps Rocky nemesis Ivan Drago (Dolph Lundgren) and his son Viktor (Florian Munteanu). The Dragos have been harboring hatred for decades, after losing to Rocky, Ivan lost his honor, his wife, and the respect of his country. Viktor is a mountain, built like no other heavyweight, and his aggression and speed is like nothing Creed has ever faced. Suddenly the champion is now the underdog again, can Creed convince Rocky to help him or will Rocky let the past stay in the past?

You’ve got to give Stallone credit: People have been making fun of him for 20 years, saying that he would be making Rocky 10 about a fight in an old age home. And yet here we are with him still ringside, championing the son of his former nemesis against the son of another former nemesis. The past doesn’t repeat itself exactly, but it does rhyme. What’s different is that Stallone is an older and wiser creator, he’s not the writer/director and star all in one any more. And technology has advanced in the ring and on the screen. Today’s Creed comes in high definition and with object based surround sound, yet still does not suffer for lack of human emotions, crises, and redemption that are the hallmarks of any Rocky film.

And to be honest, Adonis’s arc is a lot more fleshed out than Rocky’s ever was. Adonis has a range of emotions that Rocky never had. He’s got a more complex upbringing, with a father killed in the profession he has adopted. His relationship with Bianca has subtlety that a ‘yooooo’ cannot ever convey, while still embracing the heart of ‘yo’ at the same time.

So yeah, we’ve seen a lot of this before, but it’s got a fresh take on it when Boxing itself doesn’t really have the cachet it did back in the 70s and 80s. 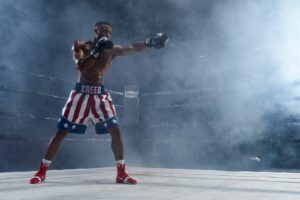 Solid all around, with modern production values, tho never really calling attention to itself, Creed II looks sharp and detailed without a hint of ringing or other artifacts. There’s a touch of noise/grain in some, but not all, darker scenes. Per IMDB it was filmed on Arri Alexi Mini and XT in 2.8K, using Zeiss lenses. There are a few obvious uses of HDR to bring out neon lights and other highlights, but nothing sustained or unnatural. 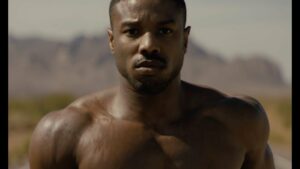 Creed II has an awesome Dolby Atmos Track but you’d never know it if you don’t check first. CMON Warner Brothers, stop making the crappy formats the default! Set the primary track to Atmos and let people chose to downgrade if they want. Grrrr!

So yeah, the Atmos track is terrific for the fight scenes of course, with punches, crowds, and trainers raining down from all angles, and the iconic Rocky score blasting from the front. There’s also a scene with Bianca singing in a club and another with her parading Adonis to the ring that are both airy and subline.

It’s everything you want from a Rocky sound track. 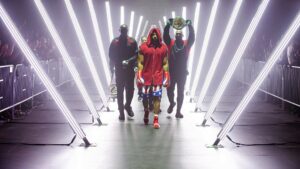 All special features are on the Bluray only, not the UHD. Dumb but… whatever.

There’s 5 deleted scenes, deleted for good reason. None of them are in any way tuned to redemption story of Creed 2. They are downright weirdly out of place.

The featurettes are all good tho! They are worth your time if you are a fan of the series.

Fathers and sons compares the Creed family vs. the Dragos, and the suffering behind both arcs.

The Rocky Legacy sees Dolph Lundgren taking us back to the early Rocky movies and interviewing Stallone about his progress as a film maker.

Somehow the Rocky story keeps trucking along, 40 years plus into its journey. And Stallone gives no sign of stopping, with both Rocky and Creed finding their own redemptions along with Viktor’s in this one. What’s next for the saga is hard to say, but you can be sure there will be some kind of underdog rising to the top, with horns blaring to cheer him on. This is a solid UHD release that makes the most of the format, if you can find the Atmos track dumbly buried in the menus at least. It’s a fun addition to the series and echoes everything that you’ll have loved about the early ones, especially #4. Maybe Clubber Lang’s kid can come back and we’ll see a battle Royale in Creed 3. If it happens we’ll be there with you! 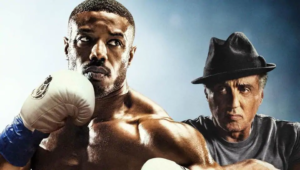 Anyone pick this up?

I'm waiting for a sale/price drop.

Sam, is the digital code Movies Anywhere or something else?

Todd Erwin said:
Sam, is the digital code Movies Anywhere or something else?
Click to expand...

Todd Erwin said:
Sam, is the digital code Movies Anywhere or something else?
Click to expand...

Unbelievable.... but at least it's not iTunes only.
Last edited: Mar 12, 2019
You must log in or register to reply here. 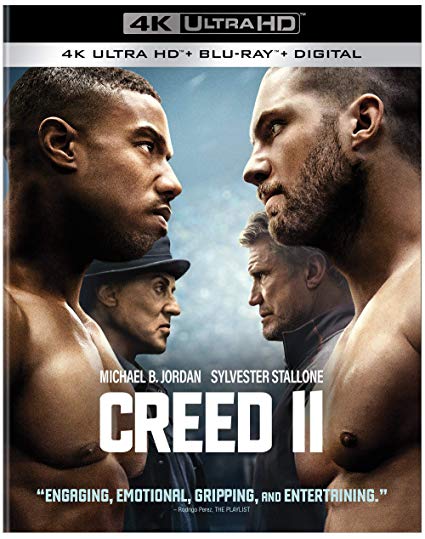