Cowboy is a very good, realistic (for its time) adult western which makes its debut on Blu-ray courtesy of Twilight Time via a typically outstanding transfer from Sony.

Cowboy is based upon the book “My Reminiscences as a Cowboy” by Frank Harris. A native of Ireland, Harris ran away from home and emigrated to the United States in 1869, when he was 13. He supported himself doing manual labor, including working on the construction of the Brooklyn Bridge. He eventually made his way to Chicago, where he found employment as a hotel clerk, and that is where the film begins.

When the hotel manager receives word that cattleman Tom Reece (Glenn Ford) is arriving, he informs Harris (Jack Lemmon) that the guests in Reece’s usual suites have to move to other rooms. Harris objects, primarily because the guests include the Vidal family, ranchers from Mexico, and the hotel clerk has become smitten with Maria Vidal (Anna Kashfi). Earlier Harris had written a romantic poem to Maria, but it was intercepted by her disapproving father. When Harris proclaims that he wants to marry Maria, Senor Vidal makes it clear that it will never happen. Rather than move to another part of the hotel, he decides to return with Maria to his ranch in Mexico.

Harris is interested in becoming a cowboy, and after Reece has checked into the hotel the clerk approaches him and declares that he wants to join the cattleman on his next drive. Reece dismisses him as a romantic tenderfoot who has no idea how arduous the life of a cowboy is. “You know what the trail is really like?” he asks. “Dust storms all day, cloudbursts all night. Man has gotta be a fool to want that kind of life.” As if to punctuate his point, he then pulls out his gun and shoots a cockroach that is crawling up the wall of his room.

However, Harris seizes on an opportunity when Reece gets cleaned out in a high stakes poker game. The clerk has $3800 in cash from the sale of his family’s farm, and he offers it to Reece in return for being a partner in the next cattle drive. Harris is also has an ulterior motive, because he knows that Reece has made a deal to buy his next herd of cattle from Senor Vidal, so the trip to Mexico will give Harris the opportunity to see Maria again. Instead of merely pocketing the money, Reece returns to the poker game and wins back most of his losses. The next morning he tries to renege on his deal with Harris, but the would-be cowboy refuses to accept his money back. Reece reluctantly allows Harris to make the ride to Mexico, but the two men frequently clash along the way.

In some respects Cowboy is reminiscent of such cattle drive films as Red River, but in a smaller, more intimate way. There are elements of humor and romance, but the center of the film is the relationship between the two lead characters. Glenn Ford is very good as the hardened, always pragmatic cattleman, and Jack Lemmon turns in a fine dramatic performance as the tenderfoot who endures saddle burns while learning to live in a world where the life of a cowboy is valued less than the well-being of a herd of cattle. The fine supporting cast includes Richard Jaeckel, Brian Donlevy, Dick York, and Strother Martin. Anna Kashfi, who is not required to do much other than look pretty, is probably best-known for being the first wife of Marlon Brando. The film is artfully directed by the underrated Delmer Daves, whose credits include such notable films as Destination Tokyo, Dark Passage, 3:10 to Yuma, and many more. The wonderful screenplay is credited to Edmund H. North, but apparently most of it was written by Dalton Trumbo, who was still blacklisted in 1958.

Apart from his exploits as a cowboy, Frank Harris led a varied and sensational life. He was a friend of Oscar Wllde and George Bernard Shaw, and in 1922 he published his scandalous, largely fictional and sexually explicit autobiography, “My Life and Loves,” which makes books such as “Lady Chatterley’s Lover” seem like family fare. There is scarcely a hint of this side of Harris in Cowboy, apart from the fact that he clearly has an eye for beautiful women.

The 1080p Technicolor image is properly framed at 1.85:1 and looks very good. Colors are solid and accurate, sharpness is very good, contrast is strong, and an appropriate level of film grain has been retained. Black levels are excellent, and while shadow detail is lacking in some scenes, nothing of importance is missing. I noticed one barely perceptible jump at the 1:20.6 mark, where it appears that a frame is missing. I had to go back and view it in slow motion to make sure that my eyes were not playing tricks on me.

The cinematography by Charles Lawton, Jr. is superb and true to life. The location filming was done largely near Santa Fe and El Paso, and while much of it is beautiful it lacks the majesty that viewers would expect from a John Ford film. But that is appropriate, because Cowboy does not strive to be an epic film.

Readers are encouraged to peruse to comments of our resident expert, Robert A. Harris.

A few words about…™ Cowboy — in Blu-ray

The English 1.0 DTS HD-MA mono soundtrack sounds as good as new. Dialogue is clear and understandable, and there is considerable punch in the scenes of a Mexican fiesta and during a stampede. The wonderful score by George Duning has excellent fidelity and can be heard as an isolated track.

The extras on this Twilight Time release consist of the film’s original theatrical trailer, the isolated score track, and an informative audio commentary by Julie Kirgo, Nick Redman, and Paul Seydor. Mr. Seydor is a noted film historian who may be the leading expert on the works of Sam Peckinpah. The commentators make some interesting and amusing comments about the real Frank Harris.

Also included is an eight-page illustrated booklet with an incisive essay by the always-excellent Julie Kirgo.

Cowboy is not in the uppermost echelon of westerns, but it is a very entertaining one which is a distinct departure from most of the westerns which populated movie theaters and television screens in the 1950s. In that respect it may have helped to pave the way for the grittier westerns which were released in the 1960s and 1970s.

This Blu-ray release has been issued in a limited edition of 3,000 for readers who are interested in purchasing it should go to the Twilight Time website or the Screen Archives website to verify that copies are still available. 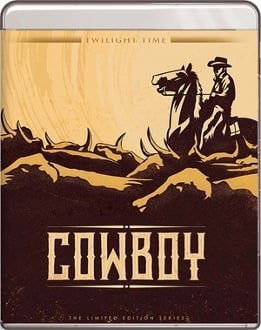