You’ll be counting down to the movie's finale 2 Stars

Countdown takes a premise good for a short film and drags it out to a 90 minute preposterous feature film.

With all of the recent news of the barrage of apps on Google’s Play Store that are actually malware, a movie like Countdown seems timely. The premise is simple enough – a free app appears that can tell you when you are going to die, up to the very second, and people begin downloading it more as a joke. When those predictions begin to come true, even after changing their plans (such as not getting in a car with a drunk driver or canceling a trip by commuter train), recently graduated Registered Nurse Quinn Harris (Elizabeth Lail, You) cancels her celebratory dinner with her father and younger sister when the app tells her she will die during the dinner. Upon doing so, a notification appears on her phone that she has now violated he terms and services of the app, followed by creepy hallucinations (or are they?). Her attempts to delete the app are futile, and the app even follows her after purchasing a new phone and plan, as the hallucinations begin to become more frequent and more horrifying. At the phone store, she meets Matt Monroe (Jordan Calloway), who is having similar experiences. They then dupe an unsuspected customer at a bar to download the app, this time actually reading the terms and conditions before canceling the installation on the man’s phone. They then consult a catholic priest, Father John (P.J. Byrne), who tells them a legend he had once read that was similar, and then suggests they find someone that can hack into the app so Father John can read the code. They discover within the code a list of names of victims that are scheduled to die soon, and the store manager/hacker alters the expiration dates on Quinn, Matt, himself, and Quinn’s sister. They also discover some ancient Latin text within the code. Father John knows this text all too well, as it is from the Devil himself and provides Quinn and Matt some possible solutions to overcome the curse.

One of the many problems I had with Countdown was the premise itself. As a short film, the premise might actually work, especially if it had any sense of satire, but it is the lack of any obvious satire and the running time of 90 minutes that drags that premise out long enough for its audience to quickly peel back the layers of preposterousness and lack of originality in first-time writer-director Justin Dec’s screenplay. The movie relies almost entirely on jump scares to frighten its audience that get old very quickly. The big climax is a big letdown, as well, with this reviewer quite literally rolling his eyes at how Quinn defeats the curse. Of course, the very final scene sets us up for a sequel. Ugh.

As bad as the movie is, Countdown actually looks quite good on Blu-ray. This is a fairly low-budget film, so don’t expect anything really exemplary in the way of visual style or production design – it’s fairly plane Jane. However, colors are well-saturated and natural, with accurate flesh tones. Black levels are inky, providing excellent shadow detail. Fine detail is also excellent, rendering fabric textures and facial features quite nicely.

The DTS-HD MA 5.1 track is very good for what it is, offering up jolts of sound and subtle use of surrounds as build up to those jolts. LFE is used sparingly, again to emphasize those jolts of fear. Dialogue is clear and understandable, directed mostly to the center channel.

Other than a DVD and Apple TV (formerly iTunes) digital copy of the film, there is nothing here. Nada. Zip. Nothing….

With Countdown, I often found myself counting down the minutes until the end credits quite often. Rent before buying. 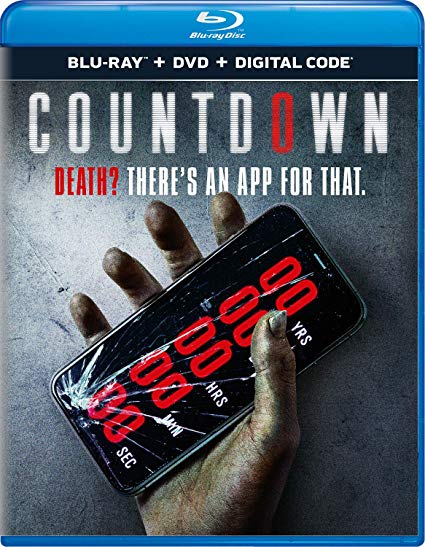