Forum List What's new Dark Style Change width
Log in Register
What's new Search
Menu
Log in
Register
Navigation
Install the app
More options
Dark Style
Close Menu
Posted on December 9, 2020 by Matt Hough
You are using an out of date browser. It may not display this or other websites correctly.
You should upgrade or use an alternative browser.
Appealing fish-out-of-water romantic comedy 3.5 Stars

Michael Apted’s Continental Divide is an enjoyable romantic comedy featuring one of John Belushi’s last film performances in a story of mismatched lovers who try to find a way into each other’s lives.

After a string of raucous, unbridled performances both on television and in films, comedian John Belushi surprised everyone with his restrained, controlled performance in Michael Apted’s 1981 romantic comedy Continental Divide. Though it ended up being one of his last films before his unexpected demise, Continental Divide remains firm proof that Belushi could give a straightforward leading man performance without resorting to the manic, no-holds-barred persona which had been his bread and butter up until this time, and the film, a feel good romance with just a twinge of bittersweet, is worth either a first look or a return trip.

Celebrated Chicago political reporter Ernie Souchak (John Belushi) is uncovering some dangerous evidence of political malfeasance, and his editor Howard McDermott (Allen Goorwitz) thinks he should leave town for a couple of weeks until some of the scandal he’s uncovered has died down a bit. He sends him to Wyoming to interview renowned ornithologist Nell Porter (Blair Brown) who has spent years studying the mating habits of bald eagles and fighting for their survival. The two couldn’t be more dissimilar, but opposites begin to attract during their time together as each comes to admire the other’s talents. Once love strikes, however, it causes more problems than it solves since their lives and their livelihoods exist on completely different planes, and neither is willing to give up what gives their lives purpose and meaning.

Lawrence Kasdan’s screenplay is chock full of the wry asides, funny observations, and effective sight gags that have distinguished many of his screenplays over the years (even if he does include an indelicate gay slur or two for no good reason), and he manages, particularly in the film’s first half, a most enjoyable fish-out-of-water scenario as we see Belushi’s city boy Souchak stumble and bumble his way around the Rockies encountering perilous heights, a host of local denizens (including bears, eagles, and a puma), and outdoor living which requires both brawn and brains (a tumble down the mountain is staged and filmed beautifully). Director Michael Apted manages to shoot the majestic Rockies (with Colorado locations substituting for Wyoming) from above and below to sometimes astonishing effect all the while keeping his story of two opposites attracting slowly but steadily falling into place. The scenes in the Chicago Sun-Times newsroom also ring true as Souchak with his endless string of street contacts and his bulldog tenacity gives us a generous taste of the life of an investigative reporter dealing with the mob. That part of the story comes to a somewhat diluted, abrupt end as the film winds toward its conclusion (by then, it is clear that the romantic story is far more important than the political investigation). The somewhat bittersweet and not particularly believable ending may enthrall romantics, but in a realistic world, the solution the pair comes to seems a little like delaying the inevitable.

Never before a romantic leading man, John Belushi here is appealing and, most surprising, organized in his performance as a professional man out of his depth in both love and the wild. What film triumphs might have been in his future had he lived to build on the leading man foundation he establishes here with this movie! Blair Brown is likewise appealing and acutely competent to live a rugged existence in the Rockies as the celebrated eagle watcher. She seems genuinely at home in these harsh surroundings and makes an engaging if surprising match for Belushi’s newspaperman. Allen Goorwitz (often billed as Allen Garfield in other films) is an enjoyable, hard-nosed but concerned newspaper editor, and Val Avery oozes comfortably into the role of crooked politician Yablonowitz. Tony Ganios as a mountain man with surprises up his sleeve for both the viewer and Ernie Souchak makes the most of his limited screen time. Tony-winner Carlin Glynn is wasted in the role of McDermott’s lady Sylvia.

The film’s 1.85:1 theatrical aspect ratio has been faithfully reproduced in this 1080p transfer using the AVC codec. Generally sharp and clean (though there is some diffusion in lower light situations and the opticals are noticeably soft), the image boasts strong color and appealing, appropriate contrast. There are no problems with age-related anomalies like scratches, splices, and the like. The movie has been divided into 8 chapters.

The DTS-HD Master Audio 2.0 mono sound mix is completely faithful to its era of monaural sound reproduction. Dialogue is always well-recorded and is likewise easy to understand, and it has been mixed most professionally with Michael Small’s background score (and a Helen Reddy song sung over the closing credits) and the engaging sound effects (which include believable growls and roars from the bears and mountain lion). There are no problems with age-related hiss, crackle, pops, or flutter.

Audio Commentary: film historians Daniel Kremer and Nat Segaloff have a lively discussion about the film’s story, cast, director, and writer. It’s rather disorganized in structure but is an easy listen and is recommended.

Michael Apted’s Continental Divide is an enjoyable romantic comedy featuring one of John Belushi’s last film performances in a story of mismatched lovers who try to find a way into each other’s lives. The Kino Lorber Blu-ray release is an appealing video and audio presentation that should attract many fans of the stars, the writer, the director, or the genre.

Thank you for the great review. I'm planning on purchasing this one. I agree that Belushi could have been leading man material in the 1980's.
You must log in or register to reply here. 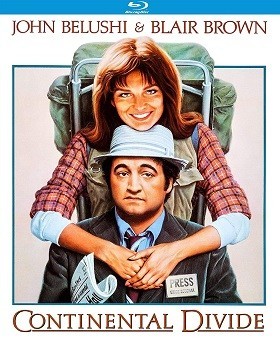