Forum List What's new Dark Style Change width
Log in Register
What's new Search
Menu
Log in
Register
Navigation
Install the app
More options
Dark Style
Close Menu
Posted on October 25, 2018 by Todd Erwin
You are using an out of date browser. It may not display this or other websites correctly.
You should upgrade or use an alternative browser.
Dark, very dark 3.5 Stars

According to the press release included with my review copy, I am supposed to preface my review with the following disclaimer:

Warner Bros. Home Entertainment provided me with a free copy of the Blu-ray I reviewed in this blog post. The opinions I share are my own.

Constantine: City of Demons originally debuted as five short “webisodes” on The CW Seed’s streaming app and website back in March 2018 (they have since been removed and replaced with the one-hour special that aired on The CW earlier this month). Featuring the voice of Matt Ryan (who also portrays the character in live-action form in a recurring role on The CW’s various DC series, and on the NBC series Constantine that ran for one season in 2014-2015), John Constantine is tasked to find the demon, Beroul (Jim Meskimen), who has captured the soul of Trish, the daughter of childhood friend Chas Chandler (Damian O’Hare). Chas accompanies Constantine to Los Angeles, only to discover that Beroul’s plan is to remake the City of Angels into the City of Demons. Constantine’s only solution may be to summon a demon more powerful than Beroul, something he attempted ten years prior in Newcastle the last time he was with Chas, and that did not end well.

Like most 2D animation on television these days, Constantine: City of Demons has a definite Japanese anime influence, which works well with its comic book roots, and the simulated hand-held approach in many of the shots also adds a personal style. This is a very dark and violent animated film, deservedly earning its R rating.

Constantine: City of Demons arrives on UHD Blu-ray from Warner in what I assume is an upconverted 2160p HEVC-encoded transfer with HDR10 from a 2K source. The differences between the UHD and included 1080p Blu-ray version are subtle, with no noticeable improvements in detail. Colors often appear more subdued overall, with added emphasis particularly in reds for dramatic effect. Contrast, though, does get a major improvement, with deeper blacks providing much richer and distinguishable shadow details.

The UHD version of Constantine: City of Demons contains the same DTS-HD Master Audio 5.1 track as found on the included Blu-ray. This is a rather front-heavy mix, with surrounds implored for a more immersive effect, although some occasional discrete sounds such as objects moving from front to back (and vice versa) are used. LFE is very strong, adding emphasis to many of the dark mystical elements occurring on-screen.

All of the special features can be found on the included Blu-ray edition of the movie.

Constantine: City of Demons is a violent and very dark tale, quite possibly too dark for some. The only major advantage of the UHD version is vastly improved contrast and more subtle use of colors. 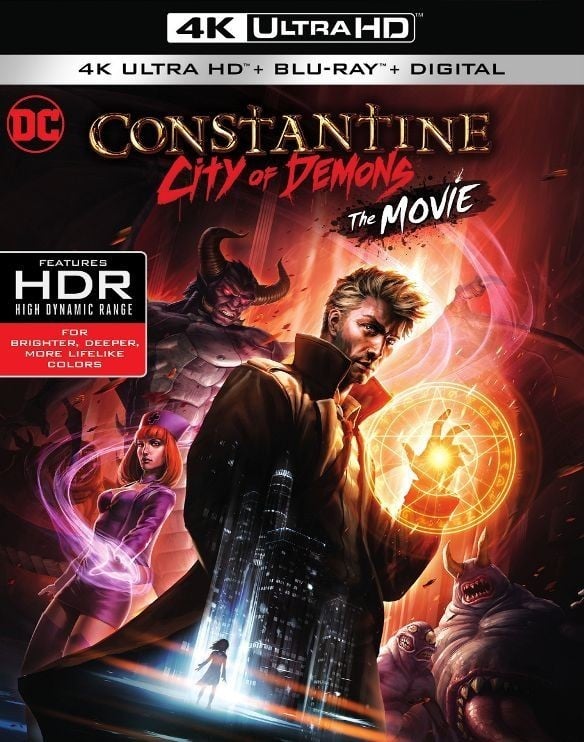