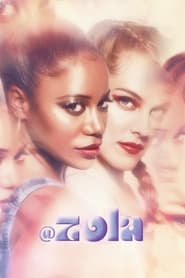 
Tagline: Y'all wanna hear a story?

Plot: A waitress agrees to accompany an exotic dancer, her put-upon boyfriend, and her mysterious and domineering roommate on a road trip to Florida to seek their fortune at a high-end strip club.
ZOLA (2021) - Films have been based on one-line pitches. Brief synopses, and, perhaps most infamously a napkin (Jean Luc-Godard and Menahem Golan at Cannes for KING LEAR); therefore, a long series of tweets might seem like a encyclopedia by a comparison as the basis of ZOLA. Of course, it's not the length of the basic text that is crucial in turning it into a successful movie, but, how it's adapted.

Here, Director Janicza Bravo and her co-Writer Jeremy O. Harris warn the viewer up front that their screenplay is only “mostly true”. The script follows the outline of the tweets (the names have mostly been changed save for the title character). A part-time Detroit stripper Zola (Taylour Paige) meets another exotic dancer, Stefani (Riley Keough) and after a fast friendship the pair head down to Tampa to have fun and make some money dancing. Stefani initiates the invite and she is accompanied by her slacker boyfriend Derrek (Nicholas Braun) and a scary dude referred to as “X” (Colman Domingo). Zola quickly comes to realize that it was all a ruse to actually have the two woman rake in dough as prostitutes.

The early part of the film with Zola and Stefani texting back and forth, making videos, carousing and having a good time is energetic and well paced. It's when the story turns darker that the movie falls down. The tone is never consistent - one moment someone is assaulted, the next they are prancing around. Nothing is ever sustained. Still, the tonal issues pale versus the lack of a clear and strong perspective. The entire project is supposedly based on Zola's tweets, yet that device is dropped fairly early (save for the constant Twitter whistle sound used to punctuate scenes - even when no tweeting is going on). There are scenes that follow Derreck and X. Stefani gets a quick montage showing her side of the story for a minute or two. There is no momentum. No drive. Just a string of scenes loosely based on tweets.

Paige and Keough are vibrant actresses and give the film what spark it has. Domingo is genuinely frightening while Braun is fitfully amusing as the hapless patsy in the game. The movie is shot on 16mm apparently to either mimic a documentary look, or, perhaps to represent what grainy cellphone footage may look like - but, it succeeds at neither. It just looks washed out, far too often.

While there is some inherent interest in such a bizarre 'true story', there simply isn't enough on screen to justify a feature length film (even at 86 minutes). The Tweets are still online, as is the magazine article (along with a reddit thread by Stefani). Read the. The movie plays exactly like what it is: A movie based on a magazine article* which in turn is based on a bunch of tweets.

I anxiously await TikTok The Movie.

Disappointed. Hoping this was about Zola Budd.
Movie information in first post provided by The Movie Database
You must log in or register to reply here.