For those who don't want to run unsightly cables across the floor, or burrow into plaster or brick walls to accommodate surround speakers, Yamaha has come up with a wireless surround solution, which includes a set of receivers, two new speakers, and a subwoofer. It's a predicament facing many surround audio enthusiasts, and may just be alleviated by this new suite of AV products with MusicCast Surround technology. 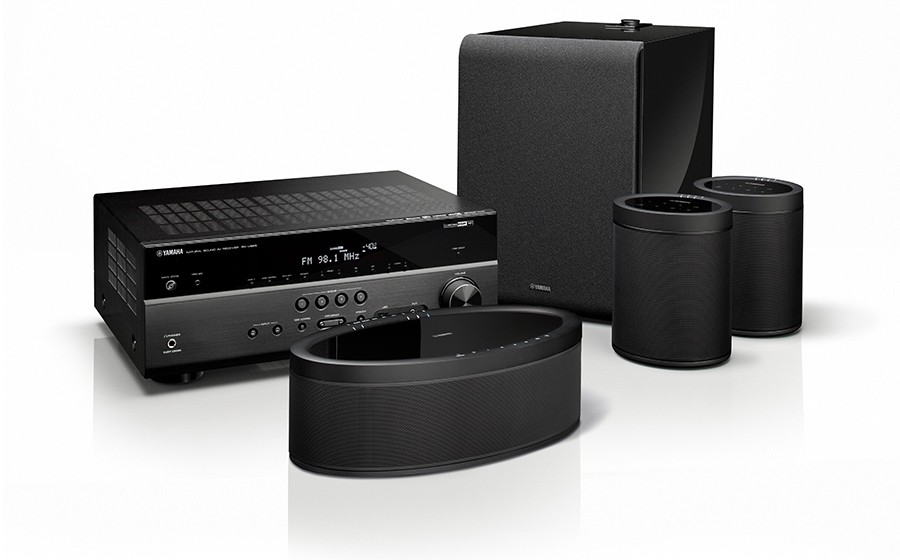 The three new receivers in the line-up are the 4K-compliant 5.1-channel RX-V485, and the 7.2-channel RX-V585 and RX-V685, while the two speakers available are the MusicCast 20 and MusicCast 50, and the one subwoofer up for grabs is the MusicCast SUB 100. An enhancement of the company's MusicCast wireless multi-room audio system, MusicCast Surround allows a user to build an AV receiver-based 5.1-channel surround sound system with wired speakers for the front channels (Front Left, Center, Front Right) and wireless speakers for the surrounds (Surround Left, Surround Right). It also supports the option of using a wireless subwoofer. 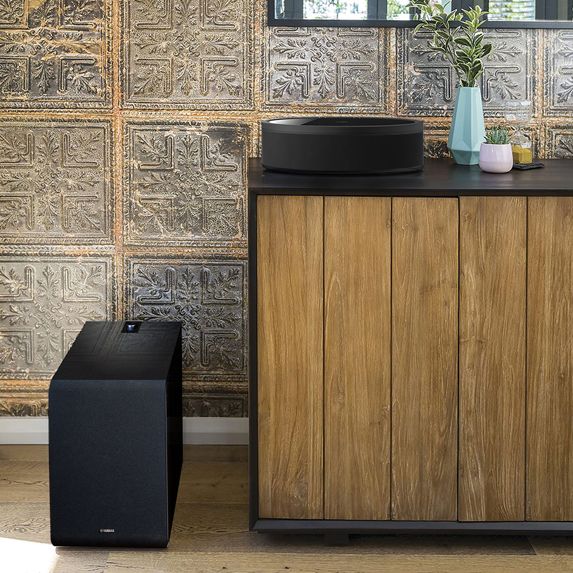 The RX-V 85 series AV receivers are also capable of supporting wired surround speakers for those who prefer a traditional setup or a speaker configuration with more than 5.1-channels. They also feature a host of other upgrades from last year's line, according to Yamaha.

MusicCast Surround builds on the Yamaha MusicCast wireless multi-room audio system which enables music enthusiasts to stream tunes from almost any audio source over a Wi-Fi network to MusicCast-enabled products throughout the house. In comparison, when the MusicCast Surround mode is employed, a direct Wi-Fi connection is made between an RX-V 85 series AV receiver and the MusicCast 20 or MusicCast 50 wireless speakers so that the surround audio streams do not have to pass through the user's home router. 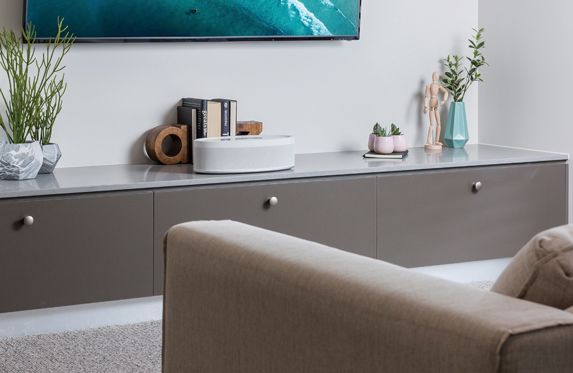 All of the new models come loaded with wireless technologies, including Wi-Fi, Bluetooth, Apple AirPlay and Spotify Connect. They also support built-in streaming services, including Spotify, Pandora, SiriusXM Internet Radio, TIDAL, Deezer, Napster and free internet radio stations, all accessible via the free MusicCast app. They also all feature voice control via Amazon Alexa-equipped devices, such as the Echo and Echo Dot smart speakers, through the use of free MusicCast skills available on the Alexa Skills Store.

"For entertainment fanatics who love movies, TV and gaming, nothing beats using an AV receiver to build a true surround sound system," said Robert Goedken, general manager, AV division, Yamaha Corporation of America. "By adding a wireless surround capability to our new line, we've made it easier than ever to create an amazing, theater-like experience at home. MusicCast Surround suddenly makes an AV receiver an attractive option for a whole new audience of entertainment fans."

Some details of pricing and availability are listed below:

The three RX-V 85 4K AV receivers will be available in May at the following MSRPs:

The following two MusicCast speakers will be available in July in a choice of black or white at the following MSRPs:

The MusicCast SUB 100 will be available in September in a piano black finish at $549.95 MSRP.

Big mistake, as these should all be available at the same time, not released sporadically over the summer, if Yamaha wants to sell an all-in-one solution.

Personally I don’t have much confidence in consumer wireless products. If we can garner anything from the pro audio field or the likes of Sonus, it’s that reliable wireless performance doesn’t come cheap. But consumers want something for nothing, so manufactures keep basing their wireless technology on Bluetooth and Wifi, both of which can be unstable, as they compete with other devices in your house using the same 2.4 GHz frequency, and maybe even your neighbor’s house as well.

Consumer wireless is fraught with problems, starting with what I call “mystery specs.” Just try to find a wireless speaker with standard audiophile specifications such as frequency response, signal-to-noise ratio or THD. Not even Sonos publishes that stuff. Power ratings? You’ll never see anything resembling the FTC standard. So what does their stated (for example) 30 watts really mean? You don’t know if they’re talking RMS (not likely), peak power, or what. And with no THD figure attached to the power rating, it could mean that 30 watts is at 15% THD or worse.

Another problem that’s sure to grate on audiophiles’ sensibilities is the lack of free interchangeability of the equipment. All current wireless offerings are proprietary systems. You can’t say, “The rear speakers for this Vizio soundbar reek, so I’m going with JBL instead.” No such luck. You’re stuck with the speakers that come with the system.

And of course the biggest concern is stability of the wireless system itself, due to the fact that most are operating in the crowded 2.4 GHz frequency range. Few can muster better than a 40-60% approval rating from Amazon (combined 5- and 4-star reviews). If that doesn’t tell you enough, dig into the negative reviews and you’ll find that the majority of the complaints are wireless issues.

Has Yamaha done anything to overcome these persistent obstacles? They have introduced two new speakers to go with the AVRs, the MusicCast 20 and 50, that can be used for surround sound. I can’t find anything on them, but Yamaha’s other MusicCast speakers haven’t been able to garner more than a 60% user approval rating on Amazon (combined 4-5 star reviews), which is not that great. Maybe the MusicCast 20 and 50 can do better since they include options for 5 GHz operation as well as 2.4 GHz (the previous models were 2.4 GHz only). We shall see.

However, specs for the MusicCast 20 and 50 are typical for wireless speakers: not exactly inspiring. No figures are offered for frequency response, or for signal-to-noise ratio. Power for the 20 is given as “maximum” (whatever that means) 40 watts for the woofer and 15 watts for the tweeter.

That doesn’t seem like much, but if the separate rating means the system has an active crossover, the available power will get more output than would be possible if a passive crossover is used. (Muddying the waters, Yamaha rates the MusicCast 50 as 70 watts, with no separation for woofer and tweeter.)

Nevertheless, it remains to be seen if these speakers will be able to keep up with the main channels of the three receivers, especially if highly-efficient speakers like Klipsch are used. Perhaps that’s why Yamaha is not offering wireless surrounds on their upper-tier, more powerful receivers.

And of course, the perennial wireless issue: “Our sandlot, our rules.” If by chance you don’t like the MusicCast speakers, tough noogies – you’re stuck with them. You can’t swap them out with someone else’s speakers.

Time and reviews, both Amazon and professional, will tell if Yamaha truly has a breakthrough wireless solution, or is merely offering another blinky, temperamental system that seems to be the norm with consumer wireless.

@Wayne A. Pflughaupt I'm skeptical too. Maybe we can get Yamaha to send us a unit to review. I'd certainly jump at the task.

I suppose... maybe... it's better than a soundbar.

I totally agree with you Wayne I have the same feeling about consumer wireless but at the same time even pro wireless you are stuck with what you have amplifier wise. Since you still have to run power to wireless speakers no matter if they are consumer or pro I would rather run the amps I want to run and pick better quality speakers that match the rest. And your so right about so many consumers who want something for nothing. Like many of us here I try to get the best I can and spend as much as I can afford even if I have to save up for what I want. Another thing with so many consumers they also want something cheap and they want it now and they are not willing to wait for something better. I like Yamaha receivers and it is a shame that they chose to lock people into there wireless speakers so they can not even upgrade.
You must log in or register to reply here.

AV News in Brief: Updates for Sony and Bryston