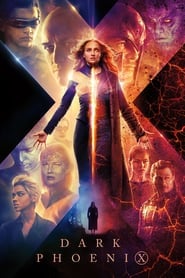 Plot: Gathered together by Professor Charles Xavier to protect a world that fears and hates them, the X-Men had fought many battles, been on adventures that spanned galaxies, grappled enemies of limitless might, but none of this could prepare them for the most shocking struggle they would ever face. One of their own members, Jean Grey, has gained power beyond all comprehension, and that power has corrupted her absolutely! Now, they must decide if the life of the woman they cherish is worth the existence of the entire universe!
20th Century Fox announces that the official title of the next X-Men film will be Dark Phoenix:

I wonder if Kinberg will direct, as rumored?

It looks like Kinberg will be directing, and Jessica Chastain is currently in negotiations to star as Lilandra, the film's villian:

I will probably go see this, but Kinberg's increased involvement does nothing for me.

There's something about the guy that just rubs me the wrong way.

Word is Lawrence, Fassbender and McAvoy will be back, as will Hoult, Turner, Shipp, Sheridan and Smit-McPhee.

I like Kinberg. I think he gets the X-Men more than others who have been involved in the franchise.

I don't think Kinberg holds the material in high regard.

He wrote X-Men Apocalypse, which was dramatically inert. He also wrote the script for the new Fantastic Four, which was dead on arrival. His script for X-Men: Days Of Future Past was a step down from the wonderful work Matthew Vaughn and Jane Goldman did on X-Men: First Class. And, of course, he wrote X-Men: The Last Stand, truly a low point in the franchise.

A list of his other credits aren't any more inspiring.

One of the things he does that really bothers me is that he's snobbish in how he brands himself. If he's working on a movie that's "dramatic", then it's a "Simon Kinberg Production." If he's working on something that people might actually like, then it's a "Kinberg Genre Production". I freaking hate that kind of snobbishness and was hoping we were coming out of dismissing entire works and types of stories as just being "genre". It's 2017 -- is it really necessary to keep on with this ridiculous notion that only certain types of stories are worthy?

I don't think he actually knows much about X-Men or cares much about them; I think he cares about his own career, which is fine, but that makes him someone I'm not thrilled to see involved in things that would otherwise interest me.

I'm actually really stunned that they were able to get Lawrence, Fassbender and McAvoy back. They locked them down with multi-picture deals when they were on their way up. I figured Fox would never be able to afford them now that they're all bona fide stars -- Lawrence especially. I got the impression when she was making Apocalypse that she was just riding out the last picture in the deal.

Lawrence gave a fantastic performance her first time around, but to me it seemed like she was phoning it in for the last two, like she had somewhere else she'd rather be. I'm not as surprised about McAvoy and Fassbender returning but I am surprised about her.

I heard she doesn't like the makeup, I wonder if there's something in the new contract that puts a limit on how often she has to appear blue.

Phoenix is being moved to allow for the schedules of its big stars, which are hard to coordinate for reshoots.

Mutants is more troubled, and nearly 50% of the movie may be reshot, since Fox wasn't happy with the cut they saw.

Even if The New Mutants were going to be ready without reshoots, it was supposed to land in February 2019. Now that Dark Phoenix is going there, it would have had to move again regardless, since Fox wouldn't be stupid enough to have two X-Men-related films hit theaters in he same month.

Also, a mod may wish to update the thread title to reflect the new release date.

Josh Steinberg said:
Lawrence gave a fantastic performance her first time around, but to me it seemed like she was phoning it in for the last two, like she had somewhere else she'd rather be. I'm not as surprised about McAvoy and Fassbender returning but I am surprised about her.

I heard she doesn't like the makeup, I wonder if there's something in the new contract that puts a limit on how often she has to appear blue.
Click to expand...

Well I can't imagine anybody liking that process.

Not much of a surprise, but it sounds like Dark Phoenix will be Fox's last X-Men film:

I hope it is actually god and serves as a satisfactory conclusion to what Fox has done over the years. So far, I've liked two out of three of each trilogy, and I hated Apocalypse, but I'll probably be convinced to see this one if in fact it provides closure. I wonder how much there will be, though, given that it was scripted before the merger was expected, and surely Fox didn't think it was going to be the last film prior to the sale. Perhaps the reshoots can attempt to add some finality to it if it wasn't there in the first place.

This puts New Mutants in a really awkward position (and Disney will be in charge by the time that's due to come out.) I wonder how they'll decide to handle that, since it was obviously intended to launch another sub-franchise, but now will end up a one-off. And it also explains why Fox hasn't signed David Leitch to direct Deadpool 3 yet, as he has attached himself to two other film this week. (That being said, I feel like Deadpool is too racy for the MCU as it currently stands, so Feige will have to figure out how to handle him, since I doubt very much that Disney will allow an R-rated MCU-branded film.)

This movie feels like a lame duck now. And, sadly, nothing in the trailer suggests to me that it should not be.

Everything on display here feels like we've been there and done that already with more panache in earlier X-Men films. Even the song in the trailer mentions it being the end. How...ironic.

Just another lukewarm X-Men movie made by Fox Studios. Saw the trailer. This adaption looks just as bad as The Last Stand's adaption of the Dark Phoenix Saga. Why is it that Fox can never do the X-Men justice? First Class was a good step at adapting it right. I've seen all of the X-Men movies and currently, X-Men 2: X-Men United is the only X-Men movie was was halfway decent with First Class not far behind.

Hopefully, if the Fox and Disney deal is completed, Marvel Studios can do the storyarc justice and just ignore everything that Fox Studios has done. I was expecting to see The Starjammers and the Shiar in the trailer. They were nowhere to be found in the trailer. Only thing we got, as far as space was concerned, was a space shuttle jetting up into space. LOLS.

When it comes to The Dark Phoenix Saga, Fox Studios really needed to get this one right, hitting it out of the ball park with the trailer. I was just left with "eh? what the hell is this?". It just felt like another mediocre X-Men trailer for a new film in the franchise.

I kinda like the trailer, although I expect to see more scenes in space if they're doing it right.

And yes, I am sure Marvel Studios will do a good job when they get their hands on these characters, but they have a tall order in matching the casts that Fox has used. McAvoy, Fassbender, Lawrence, Stewart, McKellan, Jackman, and so on. The X-Men films have utilized great actors.

Didn't do a thing for me, and for such a storyline the movie feels quite small based on that trailer. Maybe they should change the name of the film to X-Men: Contractual Obligations?

It's interesting to me that neither the trailer nor the poster is actually referring to the movie as "X-Men: Dark Phoenix," so that technically it appears "Dark Phoenix" is the entire title, not a subtitle. That's an interesting and odd choice in this era of branded properties.

Do they think average audiences will know when it's on the marquee that it's an X-Men movie, or are they trying to downplay that for some reason?
Movie information in first post provided by The Movie Database
You must log in or register to reply here.