Director Jean-Jacques Annaud is best known for set in nature, particularly Quest For Fire, Two Brothers, and The Bear. His latest film, Wolf Totem, based on the novel by Jiang Rong, is, unfortunately, more style than substance, a beautiful film to look at, but struggles in its ability to tell a compelling story. 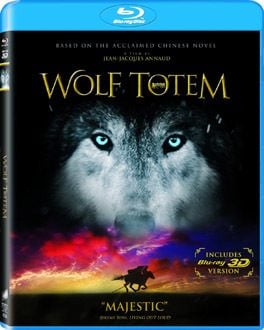 In the second year of China’s Cultural Revolution, two students from Beijing are sent as interns to live with nomadic herdsmen in Inner Mongolia to teach the residents Mandarin and learn their customs as a way to help bring all of China into the 20th Century. The herdsmen have a respect for nature and for the wolves that often attack their herds of sheep. But there are many outside of the community that are starving, and when the wolves’ food supply of frozen gazelles is raided, the wolves turn on the humans, resulting in the local leaders to declare an extermination of the wolves. One of the students, Chen Zhen (Shaofeng Feng), becomes fascinated by the wolves and their spirituality, and during a hunt, saves a young pup (whom he names Little Wolf) and raises it on his own in secret. As his secret becomes known, the marauding wolves have become more daring, attacking a walled-in pen of the town’s sheep and driving a herd of horses to a frozen watery death. Chen eventually realizes that he must free Little Wolf and eventually return to Beijing, but does he have the bravery to do it?

Jean-Jacques Annaud spent three years training the wolves for this film, and almost a year shooting on location in Mongolia. The result is a visually stunning film full of lush landscapes and beautiful imagery of animals in what appears to be their native habitat. Where the film falters is in its human story and stereotyped characters. The bond between Chen and Little Wolf is never fully established, and the politics of what was happening in China at the time are pushed so far into the background that the reason for Chen being sent to Mongolia is lost. The movie does feature one of James Horner’s last scores, both haunting and beautiful at the same time.

Wolf Totem arrives on Blu-ray from Sony in a stunning 2D presentation using the AVC codec, as well as in 3D using the MVC codec, both retaining the film’s original aspect ratio of 2.40:1. The 2D presentation contains excellent detail with lush colors that never bloom or appear oversaturated. Contrast is also very good, with deep blacks and bright whites that seldom appear clipped or crushed.

Although filmed natively in 3D, this reviewer was somewhat disappointed in its execution. Used mostly to display depth, that depth often appears flat during many of the wide, panoramic shots unless something appears in the foreground. Close-ups benefit from the use of 3D, with a few shots of the wolves’ noses appearing to pierce the screen. I viewed this film twice in 3D, once on my Samsung 60F7100 (before a row of LED’s began to flash in the lower portion of the screen, prompting me to have it replaced) and just recently on my new LG 65UF8500. The Samsung exhibited some minor ghosting using XpanD Universal RF glasses, while the 3D was much improved (but still disappointing) on the LG using the included passive glasses. The LG is a UHD model, providing full 1080p 3D to each eye even though it is a passive 3D set.

The DTS-HD Master Audio 5.1 Mandarin track is quite impressive, providing discrete wolf and other animal sounds where needed and James Horner’s score enveloping the viewer. Dialogue is directed mostly to the center channel, and never gets lost in the mix. LFE is well utilized, particularly during the horse stampede. What is disappointing, however, is that according to the end credits, the film was mixed in Dolby Atmos, so it’s a head scratcher that there is no Atmos track or even a 7.1 mix (DTS or Dolby), for that matter.

A Look At The Cast (1080p; 3:19): Interviews with the cast, mostly in Mandarin with English subtitles.

Saving The Environment (1080p; 5:28): A look at the environmental issues raised by the film.

Trust - Exclusive Behind The Scenes Clip

Wolf Totem could have been a more interesting film if the human characters were not cardboard cutouts and the story better developed. It’s a gorgeous film to watch, but nothing more. Fans of the late James Horner may want to pick this up to listen to one of his final scores.