Wish I Was Here kickstarts itself onto Blu-ray with an edition that offers a solid high definition presentation of this surprisingly effective movie, along with a brace of special features that actually inform as much as they entertain. Zach Braff’s movie is a true labor of love – a low budget family character study that examines what it means to be a child and a parent at the same time. There’s too much raunchy material for this to make an effective family movie, but it will definitely work for audiences in their twenties and up. And it packs more than a couple of unexpected body blows along the way. For this and more, Wish I Was Here is Recommended for rental or purchase. 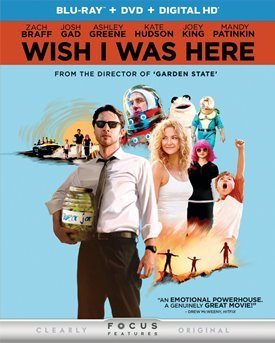 Wish I Was Here is a truly surprising movie. Known primarily for the Kickstarter campaign that saw fans provide most of the movie’s funding (Worldview Entertainment pitched in to get them the rest of the way), the film is a simple one. It’s the story of Aidan Bloom (Zach Braff), a struggling Los Angeles actor with a family that includes a wife (Kate Hudson) who must work to support them and two kids struggling with their own identities. What gets things moving is Aidan’s father Gabe (Mandy Patinkin), whose resurgent cancer inadvertently brings the rest of the family together. Some of the movie can be seen as scenes were Aidan realizes what it means to be father to his kids, and some of the movie works as Aidan struggles with what it means to be a good son. Some of the movie has to do with Aidan’s fantasies – of being either a sci-fi warrior or a successful actor, or both. There are elements both of very silly comedy and of unexpectedly moving depth charges. Both elements work equally well, sometimes at the same time. It’s not a perfect movie by any means – it’s actually quite ragged. But the rough edges are frankly appealing – and for the sheer heart of the performances of everyone involved, this is an easy movie to Recommend. The only caveat is that the movie has some moments of raunch that feel a bit out of place. Without them, the movie would easily have been a good PG-13 family night experience. With them, the movie does earn its R rating, and thus probably wouldn’t work for an audience below 20.SPOILERS: There’s really two scenes where things really go below the belt, and frankly neither of them is completely necessary. One early one involves Gabe catching Aidan interacting with internet porn – a scene that simply winds up feeling gratuitous, as it doesn’t really have much to do with anything else in the movie. It’s a cheap sight gag, but the movie doesn’t need it, or at least doesn’t need to go as far as the scene takes it. Another one probably would work at a reduced level – which is the sight of Aidan’s brother Noah (Josh Gad) in the midst of a love scene with his Furry neighbor (Ashley Greene). The second scene gets points for wildness and strangeness, but it’s a tough juxtaposition to go from that to the real depth charge of emotion that follows seconds later – as Noah admits to his niece that he is emotionally incapable of dealing with the reality of what’s happening to his father. These are quibbles, to be sure, but for me, they’re the barrier standing between this genuinely heartfelt dramedy and something greater.MORE SPOILERS: We also should address the big elephant in the room – and it seems to be the one that occupies all the message boards about this movie. Yes, the movie was mostly funded using the contributions of fans who donated to a Kickstarter campaign. Enough of them did so that the movie raised over 3 million dollars and was able to get into production. On the one hand, there are many commentators who have castigated the film and its producers for this approach, intimating that it’s not right to ask the fans to fund a movie out of their own pockets, rather than getting the funding from wealthier backers or self-financing. On the other hand, there’s a common rule of moviemaking – that it’s never a good idea to spend your own money, and usually it goes bad when you do. I would add that this Kickstarter campaign is one of the cases where it’s clear where the funding went. It’s all right there on the screen. This is not a situation of someone using Kickstarter or one of the other crowd-funders to just bilk the fans of their money. This is a case where Zach Braff wanted to make this movie and wasn’t getting anywhere through the traditional channels. He chose this path, and the result is that we have a worthwhile film on the other end. For myself, while I’m not a fan of Kickstarter campaigns, I am glad that he did so for this movie. In a sense, Braff did as a filmmaker what his character’s daughter does at the movie’s ending – he jumped into the deep end of the pool and started swimming. With filmmaking as with life, if you want to really be a part of it, you have to jump in with both feet.Wish I Was Here was released on October 28th on Blu-ray and DVD. The Blu-ray includes the movie in high definition, along with two commentaries, about 30 minutes of deleted footage and about 8 ½ minutes of on-set footage. The DVD includes the movie and the same extras in standard definition. The Blu-ray includes the DVD edition in the packaging, along with instructions for downloading a digital copy.

Wish I Was Here is presented in a 2.40:1 1080p AVC encode (@ an average 36 mbps) that presents the various Los Angeles locations in all their sunny glory. There’s a wide color palette on display here, partly due to the inset science fiction convention in the story, and partly due to the wild wig used by Aidan’s daughter for a good part of the movie.

Wish I Was Here has an English DTS-HD MA 5.1 mix (@ an average 3.1 mbps, going up to 4.3 mbps for the bigger sequences of music or fantasy) that mostly lives in the front channels for the dialogue, but really comes to life at various points with the indie music songs and score, and occasionally makes good use out of the subwoofer.

Wish I Was Here comes with two commentaries, as well as a fair amount of deleted material and some on-set footage to boot.Commentary with Zach Braff and Co-Writer/Producer Adam Braff – (AVAILABLE BOTH ON BLU-RAY AND DVD) – This is the first of two scene-specific commentaries. This one features the brothers Braff talking about the movie in terms of the script they wrote and what it took to make the movie. There’s plenty of discussion of the work done with the various actors on the movie, as well as the major editing changes that were made, including the complete rearrangement of the final act of the movie.Commentary with Zach Braff, Director of Photography Lawrence Sher and Editor Myron Kerstein – (AVAILABLE BOTH ON BLU-RAY AND DVD) – This second commentary finds Braff talking through the movie with his cameraman and his editor about the various choices they made throughout the movie. I should note that the initial plan was to do a single commentary, but when not everyone was available the first time, they just did the one with the two Braffs. Once Sher and Kerstein were able to make it, the second commentary was recorded. As a further note, this was a bi-coastal commentary, as Braff was watching the movie in New York while the other guys were recording their side of the discussion in Los Angeles.Deleted Scenes – (13 Total, 25:40, 1080p) (AVAILABLE BOTH ON BLU-RAY AND DVD) – Here are 13 deleted scenes, mostly involving dropped subplots of one kind or another. There’s a series of scenes about a local mural that is regularly getting tagged, and there’s a party payoff to the daughter’s swimming story that frankly feels like it needed to be cut. (This was a major part of the restructure of the film’s final act) The scenes can be viewed individually or via a “Play All” option, and there’s an option to watch them with commentary by Braff, Sher and Kerstein. Their discussion of the party scene is priceless in and of itself – it’s a classic case of everything going wrong on the day and the director realizing in retrospect that the scene wasn’t even necessary.Aston Martin Dealership Outtakes – (13:15, 1080p) (AVAILABLE BOTH ON BLU-RAY AND DVD) – This is leftover footage from a mid-movie sequence at a real Aston Martin dealership in Los Angeles, where Donald Faison turns in a cameo as a car dealer. The footage here includes a few funny jokes, but it mostly consists of either Faison or Braff cracking themselves or each other up.Directing While Acting – (8:40, 1080p) (AVAILABLE BOTH ON BLU-RAY AND DVD) – This isn’t exactly a featurette. It’s really a compilation of footage of Braff directing in the moments before and after the action, and sometimes during the sequence at hand. So we hear him give a direction to one of the kids or to Mandy Patinkin and then go into character, and then come out at the end. There’s an instructive bit at the end, of Braff really pushing the actress playing his daughter to give her all before the single take they could do of her jump into the water as the sun went down…DVD – The Blu-ray packaging includes the DVD edition, which holds the theatrical version in standard definition with a Dolby Digital 5.1 mix in English (@448 kbps). The DVD includes all the special features from the Blu-ray, albeit in standard definition.Digital/Ultraviolet Copy – The packaging has an insert that contains instructions for downloading a digital or ultraviolet copy of the movie. Subtitles are available in English, Spanish and French for the film itself, as well as for the special features. A standard chapter menu is included for quick reference.

Wish I Was Here is an unexpectedly affecting movie, a comedy with a few hard hits in it. It’s cheerfully ragged, and it has more raunch than it really needs, but deep down, it’s telling a good story about a family learning about who they are. It’s a great effort by Zach Braff, and it really deserves to be seen by more people than the small audience that found it in theaters earlier this year. The Blu-ray offers a great opportunity, along with two commentaries and some good additional material. Wish I Was Here is Recommended for rental or purchase, depending on the tastes of the viewer.

I'm sold! Thanks for the review.
You must log in or register to reply here.