Holiday Affair, with Robert Mitchum and Janet Leigh, wasn't well-received when it came out but has since developed something of a cult following, enough for TCM to honor it in a documentary about the great Holiday films.

So I was quite surprised to find out that Warner has yet to put out an HD copy for sale. Not even a streaming copy. Not even a 4K DCP, which led to my local revival house (which is a well-respected one and has screened 35mm and even 70mm prints before) having to project the movie off a DVD. Seriously.

Maybe the aforementioned following is too small. Or maybe there's something wrong with the camera negative. Maybe even the interpositive? I know that the RKO catalogue was hardly treated very good prior to Turner taking it over. There probably has to be some reason as to why a Blu-Ray for Holiday Affair is unavailable. I can imagine that the Warner Archive Collection gets frequent request letters for this film during this time of year and it would probably sell out in a heartbeat.

I think you answered your own question with your RKO film elements comments.

Robert Crawford said:
I think you answered your own question with your RKO film elements comments.
Click to expand...

I kind of figured that the poor treatment of the elements was to blame. I do listen to the WAC podcast from time to time and there have been conversations about how the RKO library has been problematic to maintain, to say the least. But I have never heard anything about what's holding up Holiday Affair, so it was a speculation on my part. Hopefully a pristine film element exists somewhere.

I enjoy listening to the LUX RADIO THEATER version of "Holiday Affair" with Mitchum and Laraine Day in the Janet Leigh part.

Also have the DVD that I watch.
I would buy a Blu-Ray if it ever came out.

Holiday Affair is a great little Christmas film which needs a release. Another is It Happened on 5th Avenue. One of my favourites Cover Up has been released and i recommend a viewing at this time of year.

Description: RKO's resident "bad boy" Robert Mitchum (Out of the Past) surprised audiences with his softer side in this classic Yule-themed romantic comedy. Mitchum portrays Steve Mason, a department-store clerk who loses his job, yet buys an electric train set for a child he scarcely knows. It must be Christmastime. Robert Mitchum and Janet Leigh are warmly matched in Holiday Affair, a seasonal favorite scripted by Isobel Lennart (later to adapt Mitchum's The Sundowners) and directed by Hope/Crosby "road movies" veteran Don Hartman. 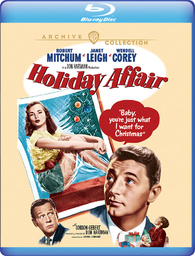 www.blu-ray.com
You must log in or register to reply here.