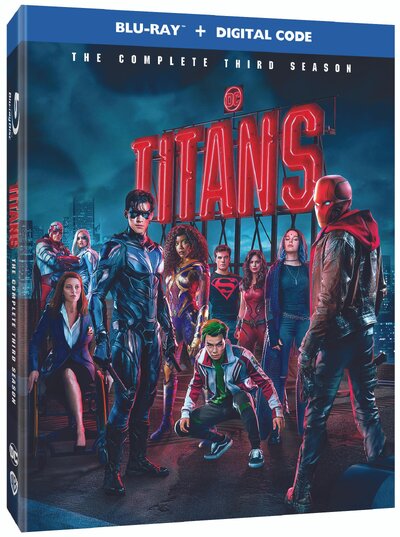 Featuring all 13 Episodes from the Third Season,

BURBANK, CA (August 23, 2022) – After an explosive third season, the hit DC show will make its way to Blu-ray TM and DVD as Warner Bros. Home Entertainment gets set to release TITANS: THE COMPLETE THIRD SEASON on October 25, 2022. Featuring all 13 epic episodes from the third season with all-new bonus featuresTITANS: THE COMPLETE THIRD SEASON is priced to own for $24.98 SRP on DVD and $29.98 SRP for Blu-ray, which includes a Digital Copy. The show is also available to own on Digital via purchase from all major digital retailers and is streaming on HBO Max.

TITANS: THE COMPLETE THIRD SEASON has received rave reviews from critics and fans alike and has been renewed for a fourth season on HBO Max. According to the Rotten Tomatoes Critics Consensus, "With bolder storytelling and deeper characterization, Titans' third season hits the show's sweet spot to deliver the best season yet.”

In the explosive third season, Jason Todd's journey as Robin comes to a gruesome end only for him to return to Gotham as Red Hood with a vengeance to take down his old team. Meanwhile, Barbara Gordon, the former Batgirl and current acting Commissioner of the Gotham City Police Department, is wary of the Titans now being back in Gotham, but her history with Dick Grayson leads her to accept their help in the GCPD's investigation of Red Hood. Also assisting the investigation is Dr. Jonathan Crane, a onetime Super-Villain and current inmate at Arkham Asylum.

Titans is produced by Weed Road Pictures and Berlanti Productions in association with Warner Bros. Television and is based on the characters from DC. Greg Walker is the showrunner and serves as executive producer alongside Akiva Goldsman, Geoff Johns, Greg Berlanti, Sarah Schechter and Richard Hatem.

​
Titans: The Complete Third Season is currently available to own on Digital. Digital purchase allows consumers to instantly stream and download to watch anywhere and anytime on their favorite devices. Digital movies and TV shows are available from various digital retailers including Prime Video, Apple TV, Google Play, Vudu and others.

Yay, finally a US release! I assume Doom Patrol will follow?
You must log in or register to reply here.