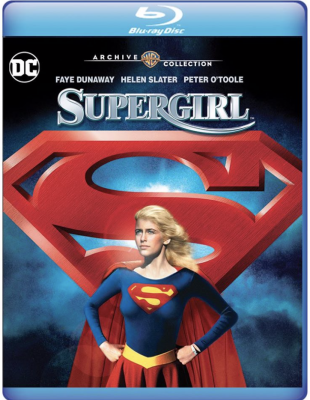 Ilya and Alexander Salkind continue to bring the lore and legend behind the World’s Greatest Super Hero to the big screen in this follow up to the beloved Christopher Reeve series of Superman films, starring Helen Slater (in her screen debut) as the sensational Supergirl! While Superman grew up believing himself “The Last Son of Krypton” another part of his home planet survived, Argo City, home of his uncle Zor-El (Simon Ward) and his wife Alura (Mia Farrow). Saved by the wizardry of Zaltar (Peter O’Toole) and the Omegahedron, Kara comes of age as a Kryptonian when a disaster whisks the Omegahedron to her cousin’s planet, Earth. Dispatched to rescue it from the clutches of the evil sorceress Selena (Faye Dunaway), Kara must tackle a steep learning curve so that she can pass the test as both mild-mannered school girl Linda Lee and the Maid of Might, Supergirl!
This special edition of Supergirl presents the film’s International Cut, remastered in High Definition for Blu-ray along with the rare Extended Cut in Standard Definition on a bonus DVD.
Reactions: Bryan^H, battlebeast, ahollis and 2 others 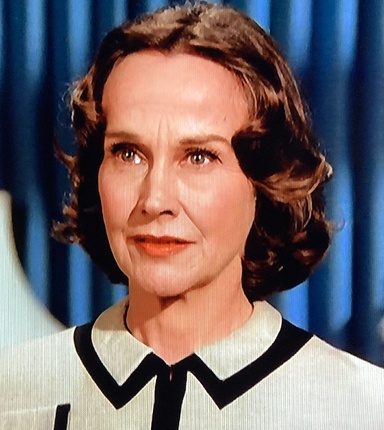 Supergirl??? For real? Warners when will we get all those classic Joan Leslie and Jack Carson movies locked in your vaults? For shame! JUST KIDDING! Just thought I'd start the whining before somebody else did. I'm really thrilled about this one. Pity the extended cut is only in SD but I'll take it!
Reactions: Will Krupp, dana martin and battlebeast
B

The extended cut is being left out of HD? You've got to be kidding... No sale!

Bill Waits said:
The extended cut is being left out of HD? You've got to be kidding... No sale!
Click to expand...

If the film material doesn't exist to create a new scan of that version, what else should they do?

Gee, they're not using the famous poster art where the Statue of Liberty has the wrong arm raised!
Reactions: Peter Apruzzese 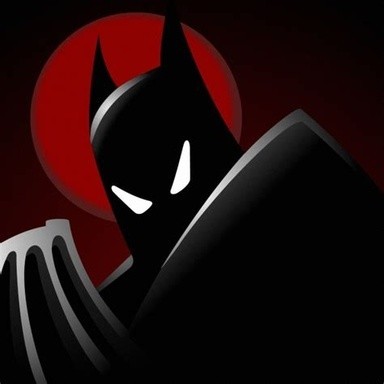 "The guys at Warner Archive in the first fifteen minutes here detail and summarize the Supergirl release. They do argue again that they invested significantly in attempting to find a version or any film elements from the so-called 'Extended Cut', but could not."
*********

- Even if it was possible to put the extended cut in HD quality, I looked into this better and perhaps seamless branching is IMPOSSIBLE or at least it does look like that way.

In both I.V. (international version) and D.C.:

********
Before Kara enters the class room the DC features the teacher asking the kids a question. Kara then sits down next to the kids. In the IV she can be seen walking around the room again, while the DC includes a kid answering the question first.

At 03:26 she stops speaking while Kara enters and says "sorry"

- We don't hear the teacher in the background. The score plays instead.

Another shot of Selena saying: "Shade Plants?". The following take including "To us!" has been expanded in the IV by the sentence "And the seeds we plant together". Both versions are in synch again after Ethan collapses due to the magic potion.

In a few other moments the international version is LONGER. That means when we watch the Director's cut and its additional 15 minutes this is not the WHOLE MOVIE, some bits are missing.

*****
Also there's this fact about the DVDs (note that Warner only released for the 1st time years after Anchor Bay 2-disc limited edition):

- Note that the Warner Bros. release includes an edited version of the audio commentary from the Anchor Bay release. All comments about Anchor Bay are edited out.

It's safe to assume these edited commentaries are in this Blu-ray, too. Unfortunately audio commentaries are rarely subtitled, so I can't tell offhand what exact sentences were removed by Warner.
B

Peter Apruzzese said:
If the film material doesn't exist to create a new scan of that version, what else should they do?
Click to expand...

I'm sorry, but I just don't buy it. They had the material previously, and released it in anamorphic widescreen, which means they had all of the source material available for HD. Prior to DVD, film handling and storage wasn't as detailed oriented as it started becoming with the advent of DVD, and since there have been no reported fires or other catastrophic disasters, those HD elements to produce the extended cut is there.

Bill Waits said:
I'm sorry, but I just don't buy it. They had the material previously, and released it in anamorphic widescreen, which means they had all of the source material available for HD. Prior to DVD, film handling and storage wasn't as detailed oriented as it started becoming with the advent of DVD, and since there have been no reported fires or other catastrophic disasters, those HD elements to produce the extended cut is there.
Click to expand...

While Warner finally got the 'rights' to SUPERGIRL after a protracted legal battle, they were limited in the physical assets still in existence. The so-called director's cut was ONLY given to them in the form of the standard definition DigiBeta tape of the Anchor Bay release. That's ALL they have. They even looked at the Studio Canal holdings and no other version could be found that they could lay hands on.
Reactions: Peter Apruzzese

Finally watched this today with the kids, who are big fans of the current TV show. They enjoyed it. I hadn't seen it since I saw it in the theater in 1984. I didn't remember virtually any of it. Helen Slater makes a very good Supergirl, and it's nice to see Marc McClure, but Peter O'Toole and Faye Dunaway just weren't given a good enough script. I get that O'Toole is the wise old mentor, but does he have to go through the movie in a cardigan sweater? The script is the biggest flaw. With a better story, we'd be able to forgive the low budget. Still, it was a fun movie, for what it is.
You must log in or register to reply here.
Share:
Facebook Twitter Reddit Pinterest Tumblr WhatsApp Email Link