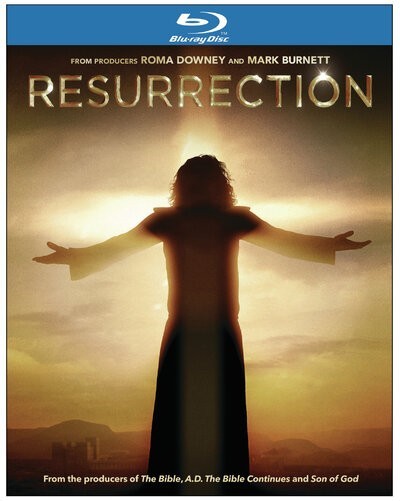 FROM MGM, LIGHTWORKERS AND

​
Burbank, CA, April 27 – The Biblical epic “Resurrection,” about the resurrection of Jesus Christ from the team behind the hit Emmy-nominated miniseries “The Bible,” will arrive on Blu-ray on June 15, it was announced today. In “Resurrection,” Jesus’ followers are hunted and afraid after the crucifixion of their friend and Lord – but Jesus’ resurrection triggers a new age of hope, faith and love that will change the world. The film is adapted from the miniseries “A.D. The Bible Continues.”

A production from MGM and LightWorkers, a division of MGM, “Resurrection” is produced by Roma Downey, Mark Burnett and “The Bible” showrunner Richard Bedser. The film is directed by Ciaran Donnelly (“The Tudors”) and written by Simon Block (“A.D. The Bible Continues”). Gina Cronk serves as executive producer. The music is composed by Hans Zimmer and Lorne Balfe.

“Resurrection” will be available on Blu-ray on June 15. The Blu-ray disc features the film in hi-definition.


SYNOPSIS​
From the producers of “The Bible” and “Son of God” comes a biblical epic on the aftermath of the earth-shattering event of Jesus’ crucifixion in first century Jerusalem. Over a gripping 90 minutes we experience the emotional turmoil faced by Jesus’ followers as they attempt to come to terms with the loss of their leader. His death leaves them disillusioned, hunted and afraid; his resurrection triggers a new age of hope, faith and love that changes the world. Adapted from “AD: The Bible Continues.”

Not to be confused with the excellent film Resurrection starring Ellen Burstyn.
You must log in or register to reply here.