led by a first-rate cast.”

IT’S NEVER TOO LATE FOR JUSTICE WHEN

DVD AND DIGITAL FROM 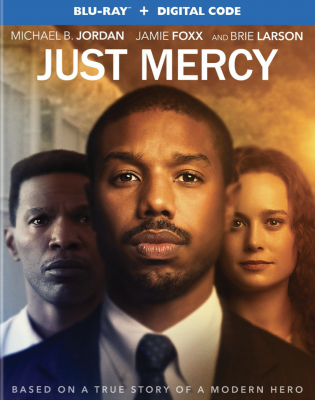 Own it Early on Digital on March 24

Blu-ray and DVD debut on April 14

Burbank, CA, February 20 - Based on the true story of a hero, “Just Mercy” arrives on Blu-ray, DVD and Digital. The film is directed by award-winning filmmaker Destin Daniel Cretton (“The Glass Castle,” “Short Term 12”), from a screenplay he co-wrote, based on Bryan Stevenson’s bestselling memoir.

Michael B. Jordan (“Creed,” “Black Panther”) and Oscar winners Jamie Foxx (“Ray,” “Baby Driver,” “Django: Unchained”) and Brie Larson (“Room,” “Short Term 12,” “Captain Marvel”) star in “Just Mercy,” an inspiring drama that brings one of the most important stories of our time to the big screen.


The main cast also includes Rob Morgan (“Mudbound,” TV’s “Stranger Things”) as Herbert Richardson, a fellow prisoner who also sits on death row awaiting his fate. Tim Blake Nelson (“Wormwood,” “The Ballad of Buster Scruggs”) as Ralph Myers, whose pivotal testimony against Walter McMillian is called into question. Rafe Spall (“The Big Short,” “The Ritual”) as Tommy Chapman, the district attorney who is fighting to uphold Walter’s conviction and sentence. O’Shea Jackson Jr. (“Straight Outta Compton,” “Godzilla: King of the Monsters”) as Anthony Ray Hinton, another wrongly convicted death row inmate whose cause is taken up by Bryan and Karan Kendrick (“The Hate U Give,” “Hidden Figures”) as Walter’s wife, Minnie McMillian, who stands by her husband.


Cretton co-wrote the screenplay with Andrew Lanham (“The Glass Castle”), based on Stevenson’s book “Just Mercy: A Story of Justice and Redemption.” Published in 2014 by Spiegel & Grau, the book has spent more than 180 weeks on The New York Times Best Sellers List and counting. It was also named one of the year’s best books by a number of top publications, including TIME Magazine. For the book, Stevenson also won the Andrew Carnegie Medal for Excellence, an NAACP Image Award and the Dayton Literary Peace Prize for Nonfiction.


The film will be available on Blu-ray and DVD on April 14. The Blu-ray features a Blu-ray disc with the film and special features in hi-definition and a Digital version of the movie.


Fans can also own “Just Mercy” via purchase from digital retailers beginning March 24.

“Just Mercy” is based on the powerful and thought-provoking true story of young lawyer Bryan Stevenson (Michael B. Jordan) and his history-making battle for justice. After graduating from Harvard, Bryan had his pick of lucrative jobs. Instead, he heads to Alabama to defend those wrongly condemned or who were not afforded proper representation, with the support of local advocate Eva Ansley (Brie Larson). One of his first, and most incendiary, cases is that of Walter McMillian (Jamie Foxx), who, in 1987, was sentenced to die for the notorious murder of an 18-year-old girl, despite a preponderance of evidence proving his innocence and the fact that the main testimony against him came from a criminal with a motive to lie. In the years that follow, Bryan becomes embroiled in a labyrinth of legal and political maneuverings, as well as overt and unabashed racism as he fights for Walter, and others like him, with the odds—and the system—stacked against them.


On March 24, “Just Mercy” will be available to own in high definition and standard definition from select digital retailers including Amazon, FandangoNOW, iTunes, PlayStation, Vudu, Xbox and others. On April 14, “Just Mercy” will be made available digitally on Video On Demand services from cable and satellite providers, and on select gaming consoles.

Movies Anywhere is a digital movie platform that enables movie fans to discover, access, and watch their favorite digital movies in one place. Movies Anywhere brings together a library of nearly 7,500 digital movies from Sony Pictures, Twentieth Century Fox Film, The Walt Disney Studios (including Disney, Pixar, Marvel Studios and Lucasfilm), Universal Pictures (including DreamWorks and Illumination Entertainment) and Warner Bros., and will continue to expand the consumer experience as more content providers, digital retailers and platforms are added. By connecting participating digital retailers that include Amazon Prime Video, FandangoNOW, Google Play, iTunes and Vudu, movie fans can now bring together their digital movie collections (whether purchased or redeemed) in one place and enjoy them from the comfort of their living rooms, and across multiple devices and platforms, including Amazon Fire devices; Android devices and Android TV; Apple TV; Chromecast; iPhone, iPad and iPod touch; Roku® devices and popular browsers. Movie fans can also redeem digital codes found in eligible Blu-ray and DVD disc packages from participating studios and enjoy them through Movies Anywhere. Movies Anywhere – your movies, together at last.


*Digital movies or TV episodes allow fans to watch a digital version of their movie or TV show anywhere, on their favorite devices. Digital movies or TV episodes are included with the purchase of specially marked Blu-ray discs. With digital, consumers are able to instantly stream and download movies and TV shows to TVs, computers, tablets and smartphones through retail services. For more information on compatible devices and services go to wb.com/digitalmoviefaq. Consult a digital retailer for details and requirements and for a list of digital-compatible devices.

Rating: Rated PG-13 for thematic content including some racial epithets.

This is a fantastic movie and I wish it had gotten more attention in its theatrical release. I would highly recommend it as a rental to anyone who missed it in theaters.

That being said, there are certainly aspects of it which are difficult to watch. I don't think I would replay it often enough to justify a release week purchase. Maybe after a price cut.

This is a one-watch film, but oh man, is it a sensational one.

It's a shame this film didn't get more attention. The performances were outstanding. One of my favorites of last year.

If you can get it cheap on digital don't hesitate to nab it.

I think they wanted to get it out the door before quarantines kept them from sending us BDs.

"Rise of Skywalker" also arrived almost 2 weeks pre-street, which is slightly earlier than with the earlier movies, though not by more than 3-4 days, IIRC.

I think BDs that come out over the next few months aren't gonna get reviewed as normal. Criterion already told me they have no one in their NYC office to send us product, and I suspect that'll happen with the CA-based firms as well.

I know this is a nothing "issue" given all that's happening in the world, but I thought some folks might be interested to know in case they don't see reviews of many new release BDs for the foreseeable future!

The funny thing to me is that, even though.I am interested in reading reviews of titles I know I want in order to find out about the quality of the release, reviews also don't matter that much in making my choice to purchase or not. If I really liked a movie, I've probably pre-ordered it before the review gets posted. That doesn't mean I don't value the information in the review, but does mean I can easily still make purchases without them being posted for a while.

That being said, I'll be more annoyed if the actual releases of the discs start getting delayed because of the virus. Like many here, I'm looking forward to getting upcoming releases to watch at home while I'm stuck in the house, and it would be disappointing if those had to get pushed. Like you said, not the worst thing in the world, but this will be my source of entertainment for the next while.

Got a press release from Uni for "Current War" that indicated they'd only have digital copies for review. I assume that's because they just don't have a way to send out physical copies.

Have to imagine we disc reviewers are gonna be watching old stuff for a while!
You must log in or register to reply here.