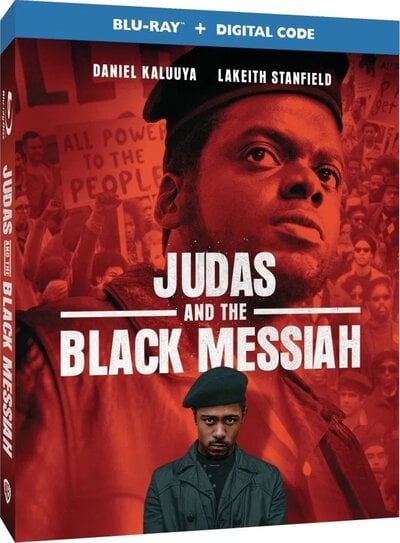 Judas and the Black Messiah

Own it on Digital on April 27

Blu-ray and DVD debut on May 4

“Judas and the Black Messiah” made history this year by being the first film with an all-black producing team nominated for an Academy Award in the Best Picture category. “Judas and the Black Messiah” is nominated for six Academy Awards, for Best Picture, Best Actor in a Supporting Role (Daniel Kaluuya, LaKeith Stanfield), Cinematography (Sean Bobbitt), Original Song (“Fight For You,” music by H.E.R. and Dernst Emilie II, lyrics by H.E.R. and Tiara Thomas), and Original Screenplay (screenplay by Will Berson & Shaka King, story by Will Berson & Shaka King and Kenny Lucas & Keith Lucas). Kaluuya also won a Golden Globe for Best Supporting Actor – Motion Picture.

The “Judas and the Black Messiah” impact campaign, designed by Participant, is educating audiences with a more comprehensive history of the Black Panther Party, connecting its legacy to today’s movement for Black lives and empowering audiences to join local organizations advocating for Black communities. To learn more, visit www.LiveForThePeople.com.

FBI informant William O’Neal (LaKeith Stanfield) infiltrates the Illinois Black Panther Party and is tasked with keeping tabs on their charismatic leader, Chairman Fred Hampton (Daniel Kaluuya). A career thief, O’Neal revels in the danger of manipulating both his comrades and his handler, Special Agent Roy Mitchell (Jesse Plemons). Hampton’s political prowess grows just as he’s falling in love with fellow revolutionary Deborah Johnson (Dominique Fishback). Meanwhile, a battle wages for O’Neal’s soul. Will he align with the forces of good? Or subdue Hampton and The Panthers by any means, as FBI Director J. Edgar Hoover (Martin Sheen) commands?

“Fred Hampton for the People”
ABOUT MOVIES ANYWHERE


Movies Anywhere is a digital movie platform that enables movie fans to discover, access, and watch their favorite digital movies in one place. Movies Anywhere brings together a library of nearly 7,500 digital movies from Sony Pictures, Twentieth Century Fox Film, The Walt Disney Studios (including Disney, Pixar, Marvel Studios and Lucasfilm), Universal Pictures (including DreamWorks and Illumination Entertainment) and Warner Bros., and will continue to expand the consumer experience as more content providers, digital retailers and platforms are added. By connecting participating digital retailers that include Amazon Prime Video, FandangoNOW, Google Play, iTunes and Vudu, movie fans can now bring together their digital movie collections (whether purchased or redeemed) in one place and enjoy them from the comfort of their living rooms, and across multiple devices and platforms, including Amazon Fire devices; Android devices and Android TV; Apple TV; Chromecast; iPhone, iPad and iPod touch; Roku® devices and popular browsers. Movie fans can also redeem digital codes found in eligible Blu-ray and DVD disc packages from participating studios and enjoy them through Movies Anywhere. Movies Anywhere – your movies, together at last.