Apologies, we are two days behind on this announcement as there was an email snafu 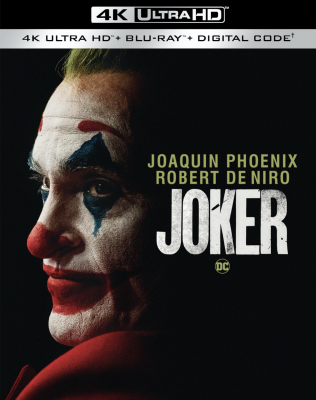 THE MOST ANTICIPATED FILM OF THE YEAR,

DVD SPECIAL EDITION AND DIGITAL FROM

Own it Early on Digital on December 17

The critically-acclaimed film has earned more than


The 4K Ultra HD Blu-ray disc of “Joker” will feature Dolby VisionTM HDR that dramatically expands the color palette and contrast range and uses dynamic metadata to automatically optimize the picture for every screen, frame by frame.


The Ultra HD Blu-ray disc of “Joker” will feature a Dolby Atmos® soundtrack remixed specifically for the home theater environment to place and move audio anywhere in the room, including overhead. To experience Dolby Atmos at home, a Dolby Atmos enabled AV receiver and additional speakers are required, or a Dolby Atmos enabled sound bar; however, Dolby Atmos soundtracks are also fully backward compatible with traditional audio configurations and legacy home entertainment equipment.


Forever alone in a crowd, Arthur Fleck (Joaquin Phoenix) longs for any light to shine on him. Trying his hand as a stand-up comic, he finds the joke always seems to be on him. Caught in a cyclical existence between apathy and cruelty and, ultimately, betrayal, Arthur makes one bad decision after another that brings about a chain reaction of escalating events.


Phillips directed the film from a screenplay he co-wrote with Oscar-nominated writer Scott Silver (“The Fighter”), based on characters from DC. The film was produced by Phillips and Oscar nominee Bradley Cooper under their Joint Effort banner, and Oscar nominee Emma Tillinger Koskoff. Serving as executive producers were Michael E. Uslan, Walter Hamada, Aaron L. Gilbert, Joseph Garner, Richard Baratta and Bruce Berman.


On December 17, “Joker” will be available to own in high definition and standard definition from select digital retailers including Amazon, FandangoNOW, iTunes, PlayStation, Vudu, Xbox and others. On January 7, “Joker” will be made available digitally on Video On Demand services from cable and satellite providers, and on select gaming consoles.