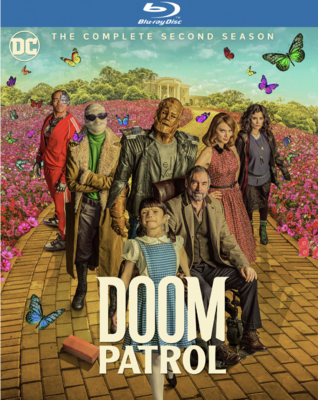 Now’s the Time to Get a Grip of Your Inner Demons!
DOOM PATROL:
THE COMPLETE SECOND SEASON

Contains All Action-Packed Episodes from the Second Season of the Hit DC UNIVERSE Original Series, Plus Two Featurettes!

Come Face-To-Face with Your Secrets with the Release of the Hit Series on Blu-ray™ & DVD on January 26, 2021​
BURBANK, CA (October 21, 2020) – Get ready to embrace the strange. DC’s favorite misfit heroes are back to save the world once again with the release of Doom Patrol: The Complete Second Season on Blu-ray and DVD on January 26, 2021 from Warner Bros. Home Entertainment. Strap yourself in for an exhilarating ride with all 9 episodes from the second season of the original DC series, plus enjoy the captivating extra features including two behind-the-scenes featurettes. Doom Patrol: The Complete Second Season is priced to own at $29.98 SRP for the DVD ($39.99 in Canada) and $39.99 SRP for the Blu-ray ($44.98 in Canada), which includes a Digital Copy (U.S. only).

DC's strangest group of Super Heroes are back again to save the world – that is if they can find a way to grow up…both figuratively and literally. Following the defeat of Mr. Nobody, the DOOM PATROL now find themselves mini-sized and stranded on Cliff's toy race car track. Here they begin to deal with their feelings of betrayal with Niles Caulder aka The Chief, while confronting their own personal baggage. As each Super Hero faces the challenge of moving beyond trauma and failure, they must come together to protect the newest family member, Niles’ daughter, whose powers remain a mysterious but real threat to bringing on the end of the world.

“The critically acclaimed series received a 96% certified “fresh rating” on RottenTomatoes.com – and continues to soar with ratings,” said Rosemary Markson, WBHEG Senior Vice President, TV Marketing . “Join in on the world’s weirdest phenomena with these unique DC Super Heroes – and get ready to binge watch the second season of their fascinating story on Blu-ray & DVD!”

With Blu-ray’s unsurpassed picture and sound, Doom Patrol: The Complete Second Season will be released in 1080p Full HD Video with DTS-HD Master Audio for English 5.1. The 2-disc Blu-ray will feature a high-definition Blu-ray and a Digital Copy of all 9 episodes from season two (available in the U.S.).

For some reason when I purchased S1 of that series on sale (a very good sale at that) I thought it was another of those DC shows which got a single season and was cancelled (and why the S1 price was so low). Looks like I need to break open that S1 set and see if I "need" more...

Doom Patrol is very offbeat and even wacky at times, in a good way. I've found it to be the most original of all of DC's TV programs. It barely even relates to the others. The closest thing I can compare it to is FX's Legion, which is the most fucked-up thing I have ever seen on television (also in a good way).

The third season of Doom Patrol (and the third season of Titans) are being released on blu-ray on Tuesday, May 24 - but only in Canada. Here's something that's never happened to me before: I tried ordering from Amazon CA and got a message that they cannot ship these particular items to the US.

So, there's no way to get these (they are not in the UK, and the Australian editions are Region B). I thought we could rely on Warner to keep giving us physical media releases, but they've chosen to make this too damn hard. Why? Anyone know any work-arounds?

Probably just delayed for a couple months for U.S. release.
You must log in or register to reply here.