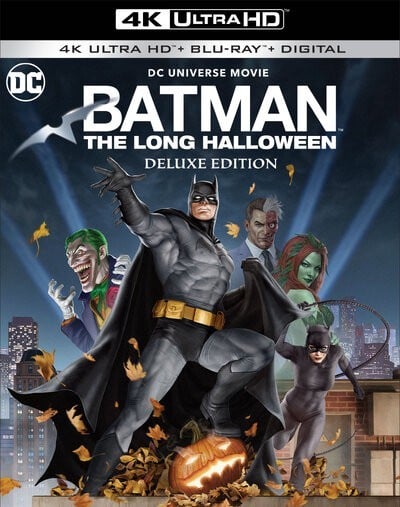 THE COMPLETE THRILLER, WITH ADDED MATURE CONTENT, AVAILABLE FOR THE FIRST TIME ON 4K ULTRA HDSTARTING 9/20/22​

BURBANK, CA (July 7, 2022) – No tricks, just treats for Dark Knight fans as Batman: The Long Halloween – Deluxe Edition – the complete mystery with added mature content – comes to 4K for the first time ever. The R-rated, feature-length animated film will be available on 4K Ultra HD Blu-ray Combo Pack (USA $34.99 SRP) for the first time ever, as well as on Blu-ray+Digital (USA $24.99 SRP), Blu-ray (only available in Canada, $29.99 SRP) and Digital starting September 20, 2022.

Produced by Warner Bros. Animation, DC and Warner Bros. Home Entertainment, and inspired by the iconic mid-1990s DC story from Jeph Loeb and the late Tim Sale, Batman: The Long Halloween – Deluxe Edition begins as atrocious serial killings on holidays in Gotham City send The World’s Greatest Detective into action – confronting both organized crime and a unified front of classic DC Super-Villains – while attempting to stop the mysterious murderer. Batman: The Long Halloweenwas originally released as a two-part film, and both films still stand at 100% fresh on Rotten Tomatoes.

BATMAN: THE LONG HALLOWEEN – EVOLUTION OF EVIL (New Featurette) – The mystery surrounding the Holiday Killer shrouds Gotham in a sinister darkness forcing Batman to stop the villain's assault on the city. This is a comprehensive look at The Long Halloween with original writer, Jeph Loeb, and filmmakers.

Spend some time with the expansive canon of popular DC Universe Movies, DC Animated Movies and many other animated DC films and television series by checking out HBO Max!


ABOUT MOVIES ANYWHERE​
Movies Anywhere is a digital movie platform that enables movie fans to discover, access, and watch their favorite digital movies in one place. Movies Anywhere brings together a library of nearly 7,500 digital movies from Sony Pictures, Twentieth Century Fox Film, The Walt Disney Studios (including Disney, Pixar, Marvel Studios and Lucasfilm), Universal Pictures (including DreamWorks and Illumination Entertainment) and Warner Bros., and will continue to expand the consumer experience as more content providers, digital retailers and platforms are added. By connecting participating digital retailers that include Amazon Prime Video, the Apple TV app, FandangoNOW, Google Play and Vudu, movie fans can now bring together their digital movie collections (whether purchased or redeemed) in one place and enjoy them from the comfort of their living rooms, and across multiple devices and platforms, including Amazon Fire devices; Android devices and Android TV; Apple TV, iPhone, iPad, and iPod touch; Chromecast; Roku® devices; and popular browsers. Movie fans can also redeem digital codes found in eligible Blu-ray and DVD disc packages from participating studios and enjoy them through Movies Anywhere. Movies Anywhere – your movies, together at last.


ABOUT DIGITAL​
Digital movies or TV episodes allow fans to watch a digital version of their movie or TV show anywhere, on their favorite devices. Digital movies or TV episodes are included with the purchase of specially marked Blu-ray discs. With digital, consumers are able to instantly stream and download movies and TV shows to TVs, computers, tablets, and smartphones through retail services. For more information on compatible devices and services, go to wb.com/digitalmoviefaq. Consult a digital retailer for details and requirements and for a list of digital-compatible devices.


Thank you for supporting HTF when you preorder using the link below. If you are using an adblocker you will not see link. As an Amazon Associate HTF earns from qualifying purchases​
Last edited: Jul 11, 2022

Figures, as I just picked up the individual blu-rays not long ago.

Though it sounds like in spite of being labeled a "deluxe edition", the only thing they've done here is joined the two parts into one long movie and added one featurette?

Malcolm R said:
Figures, as I just picked up the individual blu-rays not long ago.

Though it sounds like in spite of being labeled a "deluxe edition", the only thing they've done here is joined the two parts into one long movie and added one featurette?
Click to expand...

I've got the digitals...I don't need this longer version too. I'll pass.

Preorders posted
You must log in or register to reply here.