Irving Berlin wrote the story and song score for two of the biggest musicals of the 1940s both of which starred Bing Crosby and Fred Astaire: Holiday Inn and Blue Skies, and the intention was to make it three for the team with the 1954 White Christmas, but through matters of timing and fate, neither Fred Astaire nor his replacement Donald O’Connor managed to make it into the picture. Instead, Bing was paired with Danny Kaye, a wonderfully compatible co-star, brash and clownish to his earnest wistfulness and making this third Crosby-Berlin teaming the most financially successful of them all. The film through theatrical and television presentations has certainly attained the deserved reputation of a classic holiday treat: wonderful songs with a wisp of a story and appealing performers giving their all in the kind of musical comedy playing that one just doesn’t see in the movies any more. 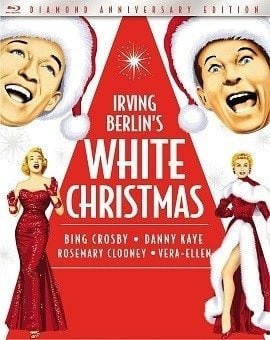 After surviving World War II, star entertainer Bob Wallace (Bing Crosby) pairs up with newcomer singer-comic Phil Davis (Danny Kaye) to form a dual act that soon rises to the top in show business with huge successes in nightclubs, on the radio, and a long-running Broadway show. On tour in December with their show in Miami, the boys meet the Haines sisters Betty (Rosemary Clooney) and Judy (Vera-Ellen) and follow them to Vermont where the girls are the floor show at a ski lodge which has fallen on hard times due to unseasonably warm weather. The lodge is owned and run by their old Army general Tom Waverly (Dean Jagger), and the boys decide in order to drum up business for the bankrupt resort and do a good turn for their beloved commander, they’ll bring their entire show to Vermont and showcase the Haines sisters at the same time. Along the way, love begins to blossom, but an eavesdropping housekeeper (Mary Wickes) manages to throw a wrench in the path of true love with her meddling.

The Norman Krasna-Norman Panama-Melvin Frank screenplay provides a serviceable rack on which to hang the many songs and production numbers, many of which have passed into legend over the years. The movie takes its time to set up and elaborate on the core relationship between the two show biz partners (hence the two-hour running time), and time is also well spent showing us both couples getting to know one another’s work and play habits. The romantic tiff that provides the movie with its basic conflict is silly, a misunderstanding that one brief discussion between thinking adults could have cleared up instantly, and it’s infuriating that the housekeeper who causes all the trouble never utters a word of apology or regret for the trouble she’s caused, but those things matter less in a musical where the audience is mainly wanting to be entertained by the dynamic work of its star-laden cast, and this the film delivers in spades.

Irving Berlin has provided spotlight songs and dance music for all four principals, each of whom is at the top of his or her game, and choreographer Robert Alton and director Michael Curtiz occasionally ask the four to step out of their comfort zones and offer up some change of pace in their musical menus. Thus, Danny Kaye in addition to his expected clowning and mugging does a serious and often breathtaking ballroom number with the glamorous and ever-versatile Vera-Ellen to the score’s best new tune “The Best Things Happen While You’re Dancing.” Bing Crosby and (to a lesser extent) Rosemary Clooney also dance more than was the norm in their films with both of them being primarily crooners while Vera-Ellen (whose vocals are dubbed by Trudy Stevens) is asked to do a little of everything dance-wise: modern jazz, rumba, tap, and the stunningly acrobatic splits and tumbles that were her specialty.

Berlin plumbs his catalog for some of the movie’s familiar tunes: “Blue Skies,” “Mandy,” “Heat Wave,” “Let Me Sing and I’m Happy,” “Abraham,” and, of course, the title tune which both opens and closes the movie, but his original songs for the film constitute one of his best movie scores: in addition to “The Best Things Happen While You’re Dancing,” there are the tuneful “Sisters,” the delightful “Snow” (shot imaginatively by Curtiz using foreground frozen drinks and a simulated snow and pine tree hill with a blue backdrop), a Kaye comedy number “Choreography” (poking fun at the Martha Graham school of interpretive dance), three service related tunes “We’ll Follow the Old Man,” “Gee, I Wish I Was back in the Army,” and “What Do You Do With a General?” Clooney’s exquisite somber ballad “Love, You Didn’t Do Right By Me,” and the lovely, reflective “Count Your Blessings” (which got the film’s sole Oscar nomination).

Bing Crosby and Danny Kaye have an arresting performing chemistry, and Danny’s tomfoolery delights Bing to such an extent that he breaks him up in three separate numbers, all obviously spontaneous reactions to his co-star’s ability to tickle the funny bone. Separately and together with each other or their female partners, the men are complete pros and a pleasure to watch. This is Rosemary Clooney’s best screen performance despite being saddled with that absurd moment of misunderstanding that makes her character look rather dim-witted. Vera-Ellen proves once again that she was the screen’s most versatile and accomplished dancer excelling in all areas of terpsichore and playing her role as younger sister Judy with just the right amount of sass. Dean Jagger is most appealing as the tough-on-the-outside/soft-on-the-inside general while Mary Wickes adds another acerbically funny domestic to her previous roster of such roles. Once Donald O’Connor dropped out of the production, a dancer who could keep up with Vera-Ellen was required, and John Brascia offers most able assistance. In bit roles can be glimpsed Barrie Chase, George Chakiris (who was also busy in 1954 with There’s No Business Like Show Business and Brigadoon), Grady Sutton, and Sig Ruman.

The film, the first presented in VistaVision, is framed here at 1.78:1 and is presented in 1080p using the AVC codec. This transfer is identical to the 2012 Blu-ray premiere release of White Christmas. And it’s still just as dazzling as ever. Sharpness is outstanding as one can study the clothes and hairstyles with the kind of detail that the very best transfers allow. Color is vibrant and lush (reds in particular pop especially in “Mandy” which offers many variations on the shade with salmon-colored shirts and fiery red gloves, and the blue eyes of several of the stars genuinely sparkle) with gorgeous skin tones which constitute a tremendous advance on what was offered on DVD. Black levels are excellent (Clooney’s black velvet ball gown in her solo number and her spangle-encrusted “Mandy” dress are both inky black), and contrast is consistently applied making for a thoroughly striking picture. The film has been divided into 19 chapters.

This release offers the same DTS-HD Master Audio 5.1 remix of the audio elements as before but adds a DTS-HD Master Audio 1.0 theatrical mix (before it was Dolby Digital 2.0 mono) that’s actually more robust and appealing than the surround mix which sounds rather shallow and not particularly expansive. Dialogue has been reasonably well recorded (a couple of ADR moments do make themselves known), but the orchestra sounds full with decent highs and lows in the mix.

Audio Commentary: Rosemary Clooney offers a start and stop affair as she recalls not just aspects of the film but other highlights of her career. It is informative as she points out ensemble players like Barrie Chase and George Chakiris who went on to bigger careers as well as other members of the crew who carved a special place in her heart for their kindnesses and help for her.

Sing-Along Track: subtitled lyrics to the musical portions are turned on with this feature.

Rosemary’s Old Kentucky Home (13:26, HD): Rosemary’s home in Augusta, Kentucky, is shown with her contributions to music discussed by her brother Nick Clloney, granddaughter Nine Clooney, and singer Debby Boone. Costume memorabilia from the movie housed there is also shown.

White Christmas: From Page to Stage (4:21, HD): a disappointing recap of how the screen musical was adapted for the stage with comments from Ted Chapin, book writer Paul Blake, and director Walter Bobbie.

White Christmas A Look back with Rosemary Clooney (16:46, SD): the singer recalls memories of working on the project, her co-stars, the director, and the smoothness and fun of the enterprise.

Trailers (2:24, 2:09, HD): the original and reissue trailers for the film are available separately.

The Sounds of Christmas (CD): twelve Christmas-themed selections culled from recordings, radio, and television broadcasts as sung by Bing, Danny, and Rosemary with occasional assistance from Ella Fitzgerald, Peggy Lee, and Judy Garland.

DVD Copy: the film and bonus features are enclosed on two separate DVDs.

An undeniable holiday classic and one of the most entertaining musicals of the 1950s, White Christmas never wears out its welcome and is so crammed full of amusing songs and dances that it can actually be enjoyed at any time of year. Highly recommended!

Thanks, Matt This is one my favorite Christmas films and I ordered this edition and am saving it to watch closer to the big day.

By the way, Costco is carrying a two pack of this BD (minus the CD) and the BD of Wonderful Life for something like $23.99. Great deal since I paid almost that for White Christmas alone (Amazon has a much better price now as per Matt's link).

Any thoughts about whether the 2012 package or this one is better?

I'd say it depends on your needs. If I already had the 2012 release (and I did), I wouldn't find the new additions in this 2014 release all that necessary. But my best friend is a Christmas music junkie, and that enclosed CD of songs probably not available elsewhere would be all it would take to get him to buy.

Thanks for posting. I noted there was a reissue but it’s the same disc with digital copy. 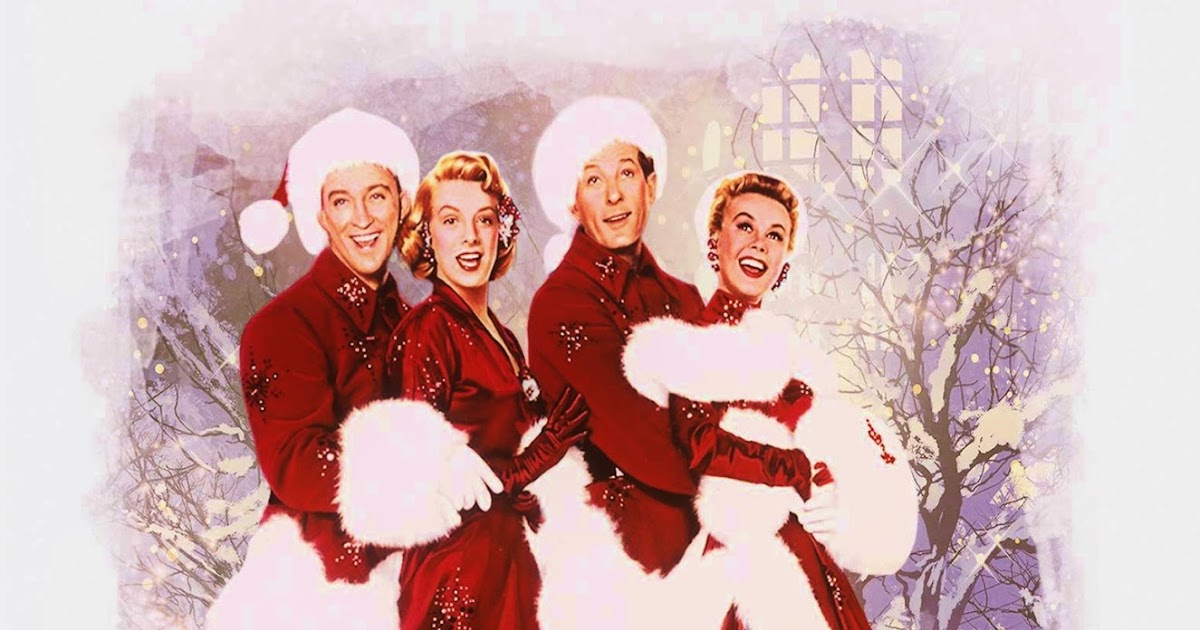 I would think 4k would be next up for this one?
I noted some white specks in the picture while watching the diamond Blu ray tonight. We never miss watching this one every December.

Last year my wife and I won tickets to see the TCM screening at a local theater. It was great.