Amongst the Silver Age shows (1960’s/1970’s) with actor Robert Conrad, what is your favorite one and why?

PS: I excluded on purpose 77 Sunset Strip because he was just a guest as private eye Tom Lopaka from Hawaiian Eye.

He will be forever identified with The Wild, Wild West (and rightly so), but I enjoyed The Duke for the half season that it ran.

Matt Hough said:
He will be forever identified with The Wild, Wild West (and rightly so), but I enjoyed The Duke for the half season that it ran.
Click to expand...

I agree with you. Conrad is James West. But I also enjoy his Pappy Boyington part.

As James West in The Wild Wild West, all the way. Runner up would be his work in Centennial.

My favorite is James T. West on The Wild Wild West.

My answer is Assignment: Vienna. Never saw the show when it aired but I got a chance to view it a few years ago and liked it. Worst was Man Called Sloane. Not a bad show but he was woefully miscast and in the Quinn Martin book they go into detail about what a jerk he was to everyone on the show he worked with.

My answer is Assignment: Vienna. Never saw the show when it aired but I got a chance to view it a few years ago and liked it. Worst was Man Called Sloane. Not a bad show but he was woefully miscast and in the Quinn Martin book they go into detail about what a jerk he was to everyone on the show he worked with.
Click to expand...

It's only a Silver Age list meaning the sixties and the seventies only.

The obvious answer is Wild Wild West, but I also enjoyed The D.A. as well as Assignment: Vienna.

Definitely James West on Wild Wild West. Not only was Robert Conrad a lot of fun on that series, but his co-star Ross Martin was even more fun to watch as Artie. They might also be the answer to another question sometime: what's the best "buddy" series from the Silver age.

If you put a gun to my head, I'm going to say The Wild, Wild West. But only because of it's longevity compared to other shows he stared in. I love Black Sheep Squadron, but it's really only a season and a half show. I'm going to nominate his 1970 appearance as "The Killer" on Mission: Impossible as his best guest starring role in the time period.

Go ahead and disagree with me. I dare you. 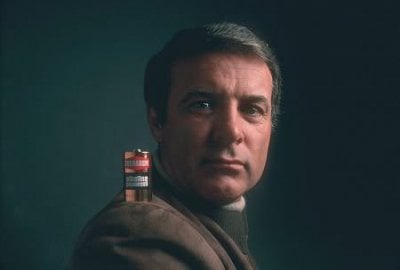 My favorite Conrad guest appearance (still from the Silver Age) was his turn as the health club magnate Milo Janus on Columbo.

Darin, you've already identified his best commercial of the period! That was a classic.
B

JohnHopper said:
Amongst the Silver Age shows (1960’s/1970’s) with actor Robert Conrad, what is your favorite one and why?

PS: I excluded on purpose 77 Sunset Strip because he was just a guest as private eye Tom Lopaka from Hawaiian Eye.
Click to expand...

Trivia on Wild Wild West: Robert Conrad was not the original choice for James West.
Rory Calhoun (The Texan) was tested first, but he was deemed "too wooden".

Of the short-lived TV series he did, I particularly liked The D.A. (1971-1972) and Assignment Vienna (1972)
which of course have not been officially released on DVD by their studio owners of origin and probably will
not be in future. On The D.A., produced by Jack Webb, there were first two pilot movies Murder One (1969)
and Conspiracy To Kill (1971) followed by the series. There was also a "crossover" episode on Adam-12
titled The Radical (1971) in which his character Assistant D.A. Paul Ryan has a cameo appearance at the
end of the episode, and the story was continued in episode 5 of The D.A., The People Vs. Saydo. That
episode in turn was included in a 1971 TV-movie derived from the series, Confessions Of The D.A. Man.

Assignment Vienna had its beginning in a 1972 TV-movie Assignment Munich starring Roy Schieder
(Jaws, French Connection, SeaQuest DSV) as spy Jake Webster prior to Robert Conrad taking over
the role for the series while Richard Basehart (Voyage To The Bottom Of The Sea) played his CiA boss
Major Caldwell (Charles Cioffi in the series). The story I heard was that Schieder back then was not
interested in doing series television, so Conrad got the role on the series instead. Just a rumor though.

Unfortunately, all I have found of both series are for The D.A. the two pilot movies, the Adam-12 crossover
episode, one episode of the series (# 8 The People Vs. Fowler), and Confessions Of The D.A. Man, and
on Assignment Vienna, the pilot movie Assignment Munich and the series episode # 5 So Long, Charley
(guest starring Cameron Mitchell of High Chaparral). That's it, and those were in the collectors market.

If memory serves, Universal filmed The D.A. and MGM Assignment Vienna. Would they still own the rights
to those series today? Sadly, both series have not turned up on TV in the US (The D.A. episode only aired once,
on TV Land in 2001). I've been looking, haven't found them except for what I already have. All Conrad's other
series I have on DVD, all retail except for High Mountain Rangers, Jesse Hawkes, The Duke, A Man Called Sloane
(which I liked at least a little bit), and Hawaiian Eye all complete series, the latter presently owned by--who else?--
Warner Archive. Which of course hasn't released any of their late 50's/early 60's detective TV series on DVD. Surprisingly, both the pilot movie Search And Rescue and the 8 episode series of High Sierra Search And Rescue were released on DVD by Platinum Disc Corporation a few years ago.

One last note on A Man Called Sloane. Robert Logan (J.R. Hale, Kookie's replacement as parking lot attendant
on 77 Sunset Strip) was the original Thomas R. Sloane, in a 1979 TV movie titled Death Ray 2000, later aired
in syndication under the title T.R. Sloane. Ironically, the TV movie (intended as the pilot movie) did not actually
air on NBC-TV until after Conrad's series was cancelled (including its brief return in the summer of 1980 as a
replacement series) and that was in 1981. Besides what has already been mentioned in a previous post,
Robert Conrad in an interview stated that he only did the series for the paycheck. And The Duke was
cancelled by then-NBC programming head Fred Silverman to make Conrad available for A Man Called Sloane.
The Duke in my opinion was the much better of the two shows, and Conrad said that he enjoyed doing it. The pilot movie for The Duke was titled Up Against The Odds (released on home video VHS in the 80's).

I think I'm very fortunate to have located what I have. I don't think Robert Conrad's lesser-known TV series will
ever see the light of day again sadly. I hope he makes it to his 85th birthday in March. I'll hate it when he goes.
Last edited: Jan 19, 2020

Wild Wild West . No contest. But a distant second is Hawaiian Eye.
B

I know it doesn't hold a candle to Robert Conrad's more well-known TV series, but I kind of liked
The D.A. (1971) and Assignment Vienna (1972) which he did after Wild Wild West and before
Baa Baa Black Sheep/Black Sheep Squadron, And there's also his classic mid-70's Everready
Battery commercial (I know of two, the one where he's on the motorcycle included with the
CBS official WWW Season 1-4 sets for its 40th anniversary and the other when he was
working out with the punching bag ("I dare you to knock this off....C'mon, I dare you.")

Conrad reportedly said in past that his least favorite show was The D.A. because there was no
action in it. All he did was stand up, walk around, and talk to the jury/trial witnesses. I also
liked The Duke, as brief as it was, the pilot movie and 4 whole episodes. The D.A. lasted
15 half-hour episodes after the two pilot movies. Assignment Vienna originally shown as
a segment of ABC-TV's crime anthology series The Men (along with its two other segments
The Delphi Bureau starring Laurence Luckinbill and Jigsaw starring James Wainwright) and
lasted only 8 episodes. The aforementioned other segments were cancelled first with
Assignment Vienna the last of the three to go. The Men was apparently ABC-TV's answer
to the NBC Sunday Mystery Movie which was on the same season and didn't last nearly as long.
A Man Called Sloane was 12 episodes and the pilot movie. High Mountain Rangers I believe
was 13 episodes including the pilot movie. Jesse Hawkes was 6 episodes including pilot movie.
And High Sierra Search And Rescue was pilot movie and 8 episodes total. Black Sheep was
cancelled not once but actually twice. I would imagine that most of these shows were cancelled
either due to low ratings or because of the fact that Conrad reportedly did not get along with
NBC-TV and CBS-TV programming executives to put it politely. Sadly they are mostly forgotten today.

Which brings me to a question, who owns the rights to these TV series today? Wild Wild West, Baa Baa Black Sheep,
Centennial, and Hawaiian Eye are all known (first three were officially released on DVD, Hawaiian Eye owned by
Warner Archive has not and probably won't be in future)

And what has become of the original film prints to the above series? Do they still exist presently?
Or have they been lost like so many other classic TV series of the past (like the remaining 15
episodes of the 1964 1 season sitcom My Living Doll starring Julie Newmar and Bob Cummings
for example)?

Just curious. Anyone know? Thanks for reading.
(owners unknown)
B

Meant to say that the owners of High Sierra Search And Rescue are unknown (I couldn't edit the previous post due to
system error). As I previously posted, it was released by Platinum Disc Corporation (now Echo Bridge Entertainment)
a few years ago.

In the wake of his death just earlier from heart failure, absolutely, without a doubt, The Wild Wild West!

Was so sad to read of his passing when I logged on this evening. He provided so much pleasure from his work for so many years. My heart goes out to his friends and family.