Not "juice" but "juicer" - it steams fruits/vegetables in an upper pan/steamer basket releasing their juice which is caught in a lower pan and then drained off. Otherwise it's boil the fruits and then run them through a strainer lined with cheesecloth. It can be a messy, laborious, process. This thing is supposed to extract the juices and leave all the skin/pulp behind. The juice is also pasteurized when it comes out. I'd never heard of this until she asked for it. One of her friends who produces jelly to sell told her about it - we've tried her product and it's very good (so's my wife's but it's not as clear/clean). Looks like I'll find out all about them now.
Click to expand...

Be sure to update us about how it works out.
Reactions: BobO'Link

Instant Pot boiled eggs. Worth the price of admission for me.
https://www.skinnytaste.com/how-to-make-perfect-eggs-in-the-instant-pot/

Finally tried the egg peeler my wife got me for my birthday. Also a success.
https://www.thegrommet.com/products/the-negg-hard-boiled-egg-peeler

I’m going to try again to start the routine of boiling a batch of eggs on Sunday to have for breakfast during the week.

I'm going to try this next. Not usually an egg noodle fan tho, will see,
https://www.reddit.com/r/instantpot/comments/euihcr/best_chicken_noodle_soup_ive_ever_eaten/

I definitely want to try this - Chicken Crust Pizza! 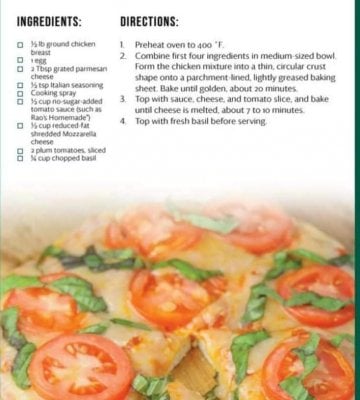 A friend of mine who is on a low-carb/high protein diet posted this on Facebook.
Reactions: Sam Posten

Todd Erwin said:
I definitely want to try this - Chicken Crust Pizza!
View attachment 67745
A friend of mine who is on a low-carb/high protein diet posted this on Facebook.
Click to expand...

That sounds like it'd be very good! We eat home made pizza fairly regularly and that'd make a nice change.

https://www.pressurecookrecipes.com/instant-pot-chili/
This was an enjoyable Instant Pot chili recipe. And the basics can be used for your particular taste in chili.

Dinner in an Instant: 75 Modern Recipes for Your Pressure Cooker, Multicooker, and Instant Pot® : A Cookbook https://www.amazon.com/dp/1524762962/ref=cm_sw_r_cp_tai_XM3lEbP8JQR3X

Having learned that Instant Pot’s included cookbook is garbage, I did some looking and bought the above cookbook. I still prefer cookbooks over searching websites (yes, I’m an old ) A quick perusing and there’s some interesting looking recipes, but I’ve yet to try them yet.

Sam Posten said:
I'm going to try this next. Not usually an egg noodle fan tho, will see,
https://www.reddit.com/r/instantpot/comments/euihcr/best_chicken_noodle_soup_ive_ever_eaten/
Click to expand...

I’ve done Turkey soup after thanksgiving a couple times. It’s a longer cook, but pretty easy and very tolerant of variations. And if you don’t like egg noodles, use noodles you do like. Thin spaghetti noodles are pretty typical. Or I think spiral would be good.
Reactions: Sam Posten

Last year around my birthday (mid Feb), I posted here about wanting to celebrate with some homemade cast iron skillet fried chicken. I was pretty happy with the results - there’s room for tinkering but it was pretty nice.

Josh Steinberg said:
Last year around my birthday (mid Feb), I posted here about wanting to celebrate with some homemade cast iron skillet fried chicken. I was pretty happy with the results - there’s room for tinkering but it was pretty nice.

My oldest grandson is not much of a fan of beef or pork. There are *very* few dishes he'll eat with either (tacos, spaghetti sauce w/meat, pork chops, and that's about it) so you can imagine my surprise when one night at the dinner table he announced he'd tried Chicken Fried Steak and thought it was quite good. I responded with "You *do* know that's not chicken, right?" Nope... he had no idea! He thought it was chicken because it was called "Chicken Fried." I had to explain the name came from the prep - that it's battered and fried like you would batter and fry chicken but it's a piece of beef. It took me, grandma, and his mom to convince him I was telling the truth and that the chicken version of that is called "Chicken Fried Chicken." So... add another beef dish to his limited group.
Reactions: Sam Posten, Josh Steinberg and DaveF

I was sincerely hoping you’d chime in on this

Josh Steinberg said:
I was sincerely hoping you’d chime in on this
Click to expand...

I forgot to ask... did you make authentic white chicken gravy with some of the frying oil and bits stuck to the pan? If not... do it again and make the gravy. Serve it with plain (just salt and pepper) mashed russet potatoes, yellow corn (on the cob if you can get it up there), and black eyed peas (purple hull will work as a substitute). Also make homemade biscuits - no canned - but if you have to go with store bought get Pillsbury Grands in the frozen section. Put the gravy on the potatoes and biscuits. You'll thank me.
Reactions: Josh Steinberg

I did not - I’m usually not a fan of white gravy - but I may give it a try next time anyway. I like to double check my tastes every few years anyway. There are very few things that I’ve tried where I’ve had an “absolutely never again shall this touch my tongue” response to.
Reactions: BobO'Link

FWIW it's essentially the same gravy you'd make to pour over chicken fried steak. The main difference is one has had chicken cooked in the oil and the other a breaded beef steak. I'd guess most folk wouldn't notice a difference. I would - I can tell you what was cooked in the oil, if anything, before the gravy was made. It really annoys my wife as I don't care for it if it's made with bacon grease or plain, fresh, cooking oil. It must be made with chicken frying oil (beef is OK if it's chicken fried steak) or sausage drippings. I also like the roux cooked a bit darker than most before adding the milk so it's more of a light to medium beige color and not white.
Reactions: Josh Steinberg

Can you refresh me on how to make the chicken fried steak gravy?

Roughly equal parts of oil and plain white (not self-rising) flour. Get the oil hot (we sometimes pour off excess from the frying pan and cook in it so you also get the little bits of crispy in the bottom of the pan - otherwise get some oil out of the frying pan and put it in a medium hot skillet - medium heat so you don't burn the roux. You want it to cook but not too fast), stir in the flour. Cook the roux until it's lightly browned, stirring regularly (almost constantly). Pour in milk. You use about a cup of milk for each tbs. of oil used but it's not real precise. It's easier to just pour in a bit of milk, stirring it in the roux until smooth and if it begins to look too thick add a bit more milk. It will thicken as it stands so will look a bit thin when right out of the skillet. If you *do* get it too thin you can simply boil it down to thicken. Just make sure to stir constantly so it doesn't burn. You can also make a bit more roux to stir in but that's risky and can cause lumps. Whatever you do don't add any uncooked flour to the gravy after the milk's been added. It'll get lumpy and taste bad. If you *do* need more roux, make it in a separate skillet and pour your current batch into the roux, stirring until smooth, and add milk as needed to thin. Salt and pepper to taste.

OR - you can go by my mom's recipe - what she gave me when I called from college to ask how to make white/sausage gravy:

Yeah... I was quite frustrated but managed to make an edible batch in spite of "until it looks right."
Reactions: Josh Steinberg

As long as it has steak and it’s fried, I’m happy
Reactions: steve jaros and BobO'Link

Interesting... I've lived in NE AR almost all of my life. Around here it's called chicken fried steak. Even in Memphis...
You must log in or register to reply here.

What's going on with PBS? KQED?

Natural Gas in the home

cooking meat in the oven - always dries out!