What sort of Board Games do you Play

Recently I purged the rest of my old game collection. The remaining stuff was mostly really old wargames made by Avalon Hill or SPI from the 1970s (before they were gobbled up by larger companies like Hasbro, etc ...).
Click to expand...

Dang: if there had been any SL or ASL in there, I would've liked to buy them off you! Shipping would be a pain, though...

Tried to play Eldritch Horror Saturday night. 1.5 hours punch out set up and rules reading. 3 hours of play and I estimate we were less than halfway through. Do not recommend at all. Death may Die is about 1000x better
Reactions: BobO'Link

Well... with my daughter's current situation (a way out of town boyfriend - 4 hrs away) and that my grandkids (the regular game group) go with her for days-weeks at a time to see him I've gone into solo player mode and am adjusting the majority of my purchases to that area. Basically it has to offer a solo mode (not necessarily be a solo only game) to move up the purchase queue.

To that end, I just purchased a copy of Terraforming Mars: And will be exploring the automa/solo mode for these which I currently own copies of (the ones with asterisks have never been played at all and, with one exception, the others haven't been played solo):

My Little Scythe (3 times - no one liked it - not even the 8yo. I *may* try it solo but I like Scythe much, much, better. It's a shame as it has superb production values and is aimed at kids with adults in mind - but I've not found any kids who like it, much less adults. It has really good reviews so just where are these people who like this one?)

Tiny Towns (twice with my 10yo granddaughter and I'd really like more people to try. It can be a real mind twist)

Horrified (played with a group *and* solo. It's not too bad in solo mode although I felt it was a bit easy, even when I fought 4 monsters, but still not bad)

Draftosaurus was a hit with my 7yo and 9yo grandsons. The 9yo isn't much of a gamer and had a harder time with the mechanics but did OK and actually won a game (I think it was totally by accident - he's not a planner type). The 7yo loves it (he's also the dino lover so it has that going for it ). We've played both sides of the board, the "easy" and "difficult" side - but, IMHO, both are about the same difficulty. You start with 6 dinosaurs drawn from a bag, place 1 based on the die roll (if you roll the die you can place yours anywhere), pass the rest to the person on the left. The die passes with each turn and controls where your opponents can place their dinosaur in a turn. Draw another 6 for round 2. Play continues until everyone's placed 12 dinosaurs in their park after which you score. It plays very quickly and is surprisingly fun.

the only game I dislike more than root is tiny towns. My buddy loves it
Reactions: BobO'Link

I looked at Root and decided it's just not a game I think we'd like. It sounded pretty good but once I looked at how it plays and the mechanics - nope. I'll try it should someone come over with a copy but I'm not going to buy one to see.

I still want to get more people to play Tiny Towns to know for sure about it as my granddaughter's not much of a challenge on that one (it's more difficult than it appears at first glance). I'll also be trying that solo/automa version at some point.

@Sam Posten was right. I’ve gone from skeptical to loving it. The Shy Pluto expansion is a must have too.
Reactions: Sam Posten

This is the way.
Reactions: DaveF

I've mentioned that I'm a Carcassone whore... well... I managed to miss purchasing South Seas and Gold Rush, a couple of the "Around the World" stand alone versions, when they were in print and have regretted it on occasion. They're currently OOP and go for stupidly high prices ($75+ each). I just received new Italian editions - purchased through Amazon US (from Amazon Global Store UK) with a final, shipped, cost of ~$33 each (less expensive than going through Amazon UK directly)! That's roughly what the US editions cost new and all I have to do is print English instructions (and I already have copies of the US Instructions on PDF). They shipped from Spain and arrived in *three* days in a standard Amazon box (not bag) undamaged - something Amazon US has forgotten how to do (both the shipping speed and proper packaging of board games - the last one I got from Amazon US was in a thin plastic bag with zero protection). I'm quite pleased and can't wait to hear reactions on the Italian boxes from the grandkids.
Last edited: Oct 18, 2020
Reactions: DaveF 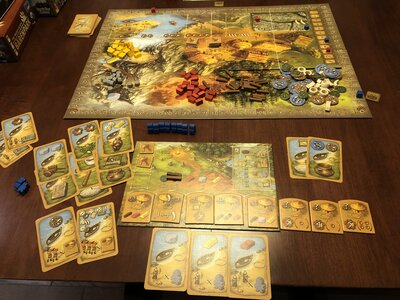 I purchased the Stone Age expansion as much as anything for the 5th player so my 9yo granddaughter could play with the rest of us. The game's not hit the table since I did that in early April. I really, really, want it to happen as we all like the game.
Reactions: DaveF

After playing lots and lots of two-player Stone Age, we found it hard to play it 4-5 player. It's a nice, pretty fast two player game with little down time. After getting used to that, it felt too slow playing with more people.

YMMV, as I like the Decorations expansion a lot, and got it in part for the 5-player addition. But...well..try it as a two player. It's not super small like Patchwork, but not as big and crunchy like Wingspace. It's good, easy flowing, medium length game.
Reactions: BobO'Link

I picked up a few more games that support a single player:

Caverna: The Cave Farmers - OK... from what I gather it's Agricola "lite" and I have Agricola so we'll see. It does sound a bit different.
AuZtralia - Sounds really intriguing with area control, worker placement, and battling Cthulhu style monsters.
Architects of the West Kingdom - Nice sounding worker placement with drafting elements.
Castle Panic - Recommended by my son and I've played a similar one: Orcs, Orcs, Orcs.
Founders of Gloomhaven - Interesting sounding play on an area and mechanics control type game.

All look to be pretty good multi-player and offer single as well. I got all the rules first to look at the single player modes and feel they might be pretty good. AuZtralia is the one I'm looking at first. I mentioned already owning a Castle Panic style game already in Orcs, Orcs, Orcs. It's kind of similar yet quite a bit different and one we enjoy. Sadly, it doesn't support single player so I picked up Castle Panic during Amazon's "Amazon day" sale quite inexpensively. It also has expansions so if I enjoy it those can add more replayability. I also snagged Caverna during a gamenerdz "deal of the day" sale for a great price. I've been looking at it for some time and the timing of the sale was perfect as they had AuZtralia in stock at a good price and I was looking for something to add for free shipping.

I'm looking real hard at picking up a copy of Viticulture - one I've been eyeballing for some time - but am trying to space things out a bit with Christmas coming up.

I've been looking at Gaia Project. Have any of you played this one? It gets higher marks than Terra Mystica and has similar play mechanisms.

Architects is great. We broke out Paladins last night and that’s super fun too

you have a copy? Where is it for sale? KS link says not available until middle of next year?
Reactions: Sam Posten

DaveF said:
you have a copy? Where is it for sale? KS link says not available until middle of next year?
Click to expand...

i play tested it at Unpub
Reactions: DaveF

Has anyone here played Gloomhaven? Thoughts?

I tried D&D once but the whole group aspect (a group who couldn't seem to get it together, and the DM's insistence that everyone play "in character" and had small talk "discussions" [full bore role playing] which I hated) turned me off, although I really liked the exploration and dungeon crawl aspects. I went to a dozen or so play nights and dropped out once my character got killed (and I made sure it got killed due to the overall poor experience). Gloomhaven looks to be a "good" D&D type game without the "overlord" aspect of a DM and solo play avoids trying to get a group together and how flaky they can be with such games.
Reactions: jcroy
You must log in or register to reply here.
Share:
Facebook Twitter Reddit Pinterest Tumblr WhatsApp Email Link