What sort of Board Games do you Play

Sam Posten said:
We have moved game night to BoardGameArena.com

It's not the same but it'll do for now.
Click to expand...

How are people board gaming while socially distanced? I'm very tech ignorant when it comes to videoconferencing or the things to do physical games without physical presence.
Expand signature
Unique shirts, mugs, and more that celebrate board games (and more) with a typographic slant

That's a pretty cool looking/sounding site! They have quite a few games I've been wanting to try. I may have to join...

I registered just now. But waiting for the registration email to show up so I can be fully setup. It's taking a while.
Expand signature
Unique shirts, mugs, and more that celebrate board games (and more) with a typographic slant

DaveF said:
I registered just now. But waiting for the registration email to show up so I can be fully setup. It's taking a while.
Click to expand...

Mine went to the SPAM folder...

I can’t find it there either.
Expand signature
Unique shirts, mugs, and more that celebrate board games (and more) with a typographic slant

That's odd - I looked around the site for 5-10 minutes and only went looking when I couldn't do a function. It was already there. As soon as I did the verification I could do what I was trying to do (watch a game in progress - that's a bit interesting). Doing that was when I saw a turn timer. After reading the FAQ about "reputation" I think I'll lurk a bit before jumping into a game - see how things work.

I *did* see several "beginner" players in games listed as more difficult. I'm guessing they already knew the game or have used the system. I could easily use the full time on some of those just seeing what's on the table and never make a move.

Haven’t received my verification email yet.

I played the intro game. I’ll try to take a look at how a normal game works. Combining this with google hangouts or FaceTime might be cool.
Expand signature
Unique shirts, mugs, and more that celebrate board games (and more) with a typographic slant

We play on BGA and chat on a Discord server we made for free.
Expand signature
Fighting against the Trailer Industrial Complex!
Check out the HTF Podcast!
HTF Rules
Classified Sales Rules
UV Sales New Clarifications
Reactions: DaveF

We cracked open Ticket to Ride France tonight. That one requires an almost complete rethink of how you do things. The mechanic of placing the track colors when you draw cards is very interesting and can make for a very tight game. The consensus was we'll play this map again.

The flip side, The Old West, sounds interesting but we didn't play it.
Reactions: DaveF

We played Ticket to Ride France again last night. This time with my daughter and her 2 youngest (13yo and 9yo). My daughter played that first time with her son (16yo) so knew the game and explained it to the girls (Super! I didn't have to do it!).

I have to say this can be a very tight and somewhat cutthroat board. My daughter, the 13yo, and I all managed to get tickets with destinations in the same area. This resulted in several "stolen" routes and having to do runarounds to some cities. In my case the extra distance they added cost me 2 tickets on the other side of the board as I didn't have enough trains to complete them. The 13yo realized about half way through that she didn't have enough trains for the tickets she'd kept (and kept asking if we could just add more - she only needed 3...). This board plays with 40 trains instead of the usual 45.

The verdict with this group was mixed. The 13yo didn't like the board and having to put down your own colors for tracks. She said "I just want to play one where all the colors are already down. This is too hard and kind of confusing." The 9yo absolutely loved it and wants to play it again. She should - she ran away with the game beating the rest of us by 30+ points! It helped that all of her tickets but one were away from the rest of us. She even picked up more tickets towards the end. My daughter and I also like this one - but it really takes more thought and concentration than other maps. 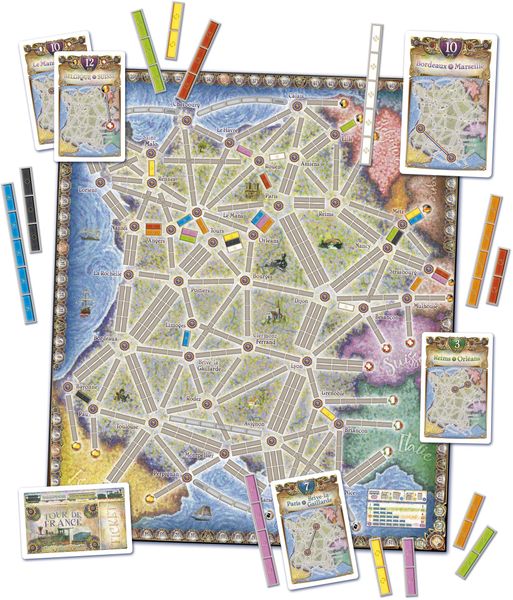 Here's a special area of the board: The crossing tracks are determined by the location played. If someone plays the Briancon to Marseille track connection the Avignon to Nice connection is no longer valid. It works the same for all the other crossing sections. Trains can't cross. There's another section with crossing tracks in the upper left portion of the board.

Yes, those are 3 parallel tracks you see. In a 2/3 player game those become single tracks as do the double routes. The doubles and triples are only used with 4/5 player games (this one plays 5 max).

There are also ferries which require a Locomotive card as one of the train cards played. The only 6 train connections are 2 ferries.

You start with a hand of 8 train cards (to help you decide which tracks to select) and 5(!) tickers (but only have to keep 3).

And I *still* want to play the Old West side of the board. It has a very interesting mechanic where you play a Station to begin the game and *all* your subsequently played trains must connect to one or *your* stations or the end of one of your tracks. No more jumping across the board. In addition, if you connect to someone else's station *they* get the points. You have 3 stations, 1 played at the start and the other 2 to be played in later turns. Sounds quite fun...
Last edited: Apr 5, 2020
Reactions: DaveF

Thanks for the overview. I’ll have to see if this available in the iOS version to try.
Expand signature
Unique shirts, mugs, and more that celebrate board games (and more) with a typographic slant

Played two games of 2p Space Base, with quick start. I’m starting to enjoy it, and understand the pushes and pulls. I still struggle with it. But it’s growing on me.
Expand signature
Unique shirts, mugs, and more that celebrate board games (and more) with a typographic slant

Space Base looks interesting. I think we'd like it - but it's gotten to the point where I have trouble getting them to play games we've played before, much less the 20-30 sitting here waiting to be played. Games I purchased because they looked interesting...
Reactions: Sam Posten

Playing Stone Age. Had to enforce social distancing on my people. 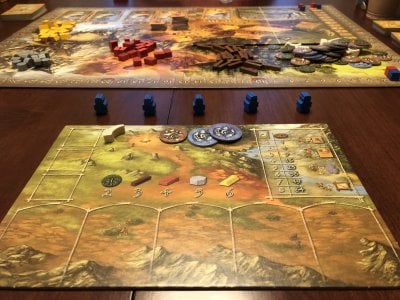 Kind of funny you posted about that one... I really wanted to break it out yesterday.

My daughter's been coming over more (they live across the street) and in a game playing mood. The 9yo wanted to play games yesterday afternoon so be broke out TTR: NY, the original TTR, and TTR: Paris (again - it's becoming quite popular - especially with the 16yo and 9yo [who won - again... I gotta stop overthinking this one!]). Since she indicated she'd be up for learning a new game we picked these "new to mom" games (which are kind of new for all of us having had 1 or 2 plays each) as well: Tiny Towns, Two by Two, and Stone Age. Sadly none of those hit the table. Maybe sometime this week.

Stone Age is possibly my wife's favorite game. And it's one of my favorite two player games. It works really great just two players, and is actually pretty fast. And after playing two player so much, the last time we played four player, it really seemed to verge on being a slog.

So definitely keep it in mind for if just you and another.
Expand signature
Unique shirts, mugs, and more that celebrate board games (and more) with a typographic slant

My grandson (the 16yo) and I played Stone Age once. He claims he doesn't remember (odd - he liked the game too). With the expansion back in print I've been looking at it but it's really difficult to justify the high price for what's in the box. But I'm somewhat a "completest" with most things so... guess I just need to suck it up as it's unlikely to drop in price and has all signs of selling quickly.

I don't know current pricing. But we no longer play without the expansion. Stone Age with Decorations is just the base game to us now, it adds a powerful new strategy that helps balance out against the food and tool strategies.
Expand signature
Unique shirts, mugs, and more that celebrate board games (and more) with a typographic slant

DaveF said:
Played two games of 2p Space Base, with quick start. I’m starting to enjoy it, and understand the pushes and pulls. I still struggle with it. But it’s growing on me.
Click to expand...

2P Space base is the worst space base, just be ready for that. It's best with 4-5.
Expand signature
Fighting against the Trailer Industrial Complex!
Check out the HTF Podcast!
HTF Rules
Classified Sales Rules
UV Sales New Clarifications

Sam Posten said:
2P Space base is the worst space base, just be ready for that. It's best with 4-5.
Click to expand...