What are your ten favorite TV shows of all time? (1 Viewer)

You've inspired me. Here's a list of ten favorite TV shows, not necessary my picks for best, but those I will watch again and again. In alphabetical order:

For fun, here's a list (slightly overlapping) of favorite shows that only lasted a single season.

In no particular order:

My 10 favourite series seen so far are:

DROP THE DEAD DONKEY (U.K.) Number one favourite comedy series
THE STORY OF FILM -AN ODYSSEY (U.K.) Amazing history of film from the very beginning to today. A must see for anyone interested in cinema from around the world.
FAULTY TOWERS (U.K.)
ARE YOU BEING SERVED (U.K.)
GOLDEN GIRLS (U.S.A.)
NAKED CITY (U.S.A.)
CITIES OF THE UNDERWORLD (U.S.A.) Best documentary series.
DINOSAURS (U.S.A.) Best animated series.
THE CIVIL WAR -Ken Burns masterpiece (U.S.A.)
THE TIME TUNNEL (U.S.A.)
F

I basically love the old TV Westerns and seldom watch anything else.

--Have Gun Will Travel

--The Streets of San Francisco

Dave Lawrence said:
Not in Top 10 placement order, but here are mine:

Some shows have a particular season or era that I love, but the entire series isn’t enough to make my 10 faves. For example, I love the 1st 4 seasons of MASH (the Larry Gelbart era) but the rest I find occasionally good but with a lot more skippable than rewatchable episodes. Same with Sanford & Son - wonderful 1st 3 seasons; but with Season 4 when Redd Foxx returned from his strike, there were new writers and producers, and quality became much more hit or miss in my opinion. So it’s still high on my faves list, but not top 10.
Click to expand...

Bob Newhart. Growing up I watched new episodes and syndicated repeats and never tired of it. The frequent absurb/dark humour seems (to me) influential on my favourite US sitcom of the nineties, NewsRadio.

[ I'll likely be back to edit later, making some additions ]

That was tough! Makes me happy to see Star Trek TOS on so many lists.
D

Some great ones already mentioned but a few favorites:

daddyora said:
Some great ones already mentioned but a few favorites:

Are you talking about Frasier?
D

One more to add and many won't remember:

daddyora said:
One more to add and many won't remember:

Now you’re talking! Definitely one that I could’ve added.

Oh, you folks reminded me:

And another in that genre:

The Rebel or Johnny Yuma I don't recall which
D

There was another good one about some guy riding a Harley Sportster around the country ...

daddyora said:
There was another good one about some guy riding a Harley Sportster around the country ...
Click to expand... 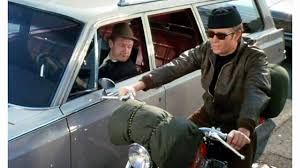 Some guy.
You must log in or register to reply here.