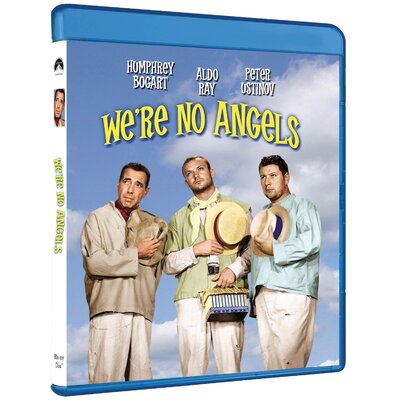 This is looking like a MOD disc. Is that accurate?

Another Vista-Vision film! It ought to have excellent video presentation. This is a nice surprise.

Very disappointed to see this coming out on a burned disc. Paramount really pisses me off with their back and forth burned and pressed catalogue titles.

borisfw said:
Very disappointed to see this coming out on a burned disc. Paramount really pisses me off with their back and forth burned and pressed catalogue titles.
Click to expand...

Just because it's a MOD release, it doesn't necessarily means it's a burned disc. Even if it is, I still don't understand why that's a problem.

MOD does not necessarily mean burned disc.
I hope someone will confirm whether it is or is not --
I want this if a pressed disc.
A

At that price point, it's most certainly an MOD. Whether pressed or not, remains to be seen. To play it safe, though, I've heard that for some of the more recent Paramount MOD's, they've been pressed. That is, unless they were bought through Amazon, where they've been burned, so I would suggest buying them somewhere besides Amazon.

Price point has nothing to do with it. Paramount has been releasing new Blu-rays of existing transfers at the $10 price point for some time. Sons of Katie Elder is a recent example.

Wonderful film, watch it each year around Christmastime. Will be looking forward to upgrading from my DVD copy

The reason I suspect it's a burned disc? Look at the spine, which simply has the words "Blu-ray Disc" rather than the BD logo. Because burned discs are not strictly compliant with the BD spec, they cannot display the BD logo.

well this could be like some of the others that have been released by Paramount as of late, burned if you buy it from one retailer, and pressed if you buy it from another; much like Funeral in Berlin, looks like i will be seeing if this is the case and making my purchase decisions accordingly

Robert Crawford said:
Just because it's a MOD release, it doesn't necessarily means it's a burned disc. Even if it is, I still don't understand why that's a problem.
Click to expand...

As StephenJH pointed out , if it doesn't have the Blu ray logo on the front and the spine states blu ray disc than it's going to be mod. Also i know some retailers carry the mod discs pressed. I got Funeral in Berlin pressed from the Bullmoose store. But when Odd Couple was released on mod the Bullmoose only got the burned version. So there's no sure way of getting a pressed copy that i know of. I prefer pressed because i believe there are fewer issues with pressed discs .Plus pressed blu rays don't scratch easily but burned ones do. And as far as the Paramount burned program , the discs are more expensive then when they are released bare bones pressed titles . Like Sons of Katie Elder and Barefoot in the Park. I just trust a pressed disc to be the safer route to go. Although i have plenty of burned dvds that i have bought over the years and they have held up. Bottom line is i would just like to see Paramount be more consistent on their releases.

borisfw said:
Bottom line is i would just like to see Paramount be more consistent on their releases.

Good luck with that as I see the studios and companies like Amazon continuing to burn discs due to their business models and convenience. From my perspective, I've had zero problems with burned discs.

Robert Crawford said:
From my perspective, I've had zero problems with burned discs.
Click to expand...

Agreed. I've tons of MOD DVDs from the Warner Archives, Universal Vault and Sony's Choice collection and none of them have gone bad on me. Which, alas, can't be said of pressed discs.

I've never had a problem with Burned DVDs. These have been around longer, and had enough market penetration to work out all the kinks.

Burned Blu-Rays are a much newer technology, have had far fewer professional releases. From what I gather, there are actually two methods for burning Blu-Rays. One has had less problems (or maybe none), the other has had problems.

I really wish when people discuss burned discs, they would distinguish between the two formats - they are two different beasts.

I am fully aware that from a content perspective, there is zero difference between burned and pressed.


As for problems, I did have Charmed S2 on burned disc, and did have problems. Would not play at all in one of my machines (Panasonic), but played somewhat in my other machine (LG). However, it would freeze up after Pausing for a length of time, and sometimes froze at the layer-change.

There is a fairly important line of distinction between burned and replicated discs, folks. Just saying. Replication is a highly specialized process, with only a handful of companies capable of 'mastering' in hi-def. Sony DADC, Cinram, etc.

To author a legit disc requires a master set of files (BDCMF) encrypted, then the data - a series of 'pits' etched in a spiral pattern starting at the inside of the disc master and onto a special 'glass master', then, loaded onto a stamper that can make virtual identical copies onto multiple discs.

These discs are coated in a reflective substance and bonded together. Blu-ray are encoded with a full computer file system for your player to 'read' and keep track of what's on the disc - dual-layered, which is like it sounds, representing 2 layers of data that the player must then re-focus its laser, passing from inner to outer layer.

A 'burned' disc discards the 'metal layer' of protection, the laser, etching the digital data at a higher than normal intensity onto a special dye. Hence, BD-Rs have significant limitations. Let's set aside they take forever to burn. From a technical standpoint, they are not as reliable as authored Blu-ray. Authored Blu's reflect more light. Also, recordings made by a burner are more prone to failure and can contain a host of 'errors' that can cause a player to skip data or simply lock up.

Dual layer discs are especially susceptible to failure because the reflective surface has 2 layers of photosensitive dye that CANNOT reflect as much light back to the laser in your player. While compatibility with various player software and burned discs HAS improved in recent years, it remains the weak-kneed sister to legitimately authored discs! Finally, mass-produced discs last longer as their is no chemical element, as in a recordable disc that can go 'bad' with the passage of time - even under proper storage and care.

Aside: I seem to recall another thread here where some were complaining a host of their old DVD-MOD discs from the Warner Archive were experiencing failure.

Psst. Dirty little secret, the authoring process for MOD-DVD and Blu-ray is pretty much the same.

Contrast that to the manufacturer's warranty on replicated discs that have undergone vigorous testing and 'suggest' the half life is roughly 100 years. Okay, good marketing - perhaps. Perhaps not. So, if you are like me and enjoy collecting movies on a disc format, while the argument can be made that BD-R is better than nothing, I would argue the choice between MOD and legitimately authored content is fairly straight forward. It's an apples to giraffes comparison in my book.

PS - I always enjoy the way studios cut corners and then cover their 'assets' by including a disclaimer, printed in minuscule font at the bottom the back packaging. Paramount's on The Stooge, Wonder Boys and We're No Angels reads as follows: "This disc is manufactured on demand in a BD-R environment and may not play on all Blu-ray Disc (TM) players." So, buyers be forewarned - and disappointed, actually. I mean, if WAC can author to legit Blu-ray via their archive, why can't Paramount? Short answer here - they can. They simply chose not to!
Last edited: Oct 27, 2020

Nick*Z said:
Aside: I seem to recall another thread here where some were complaining a host of their old DVD-MOD discs from the Warner Archive were experiencing failure.
Click to expand...

If you're referring to the very much active "Warners DVDs not working - watch to make sure they still play", the thread is referring to Warners' pressed discs, not the MOD discs. I've been collecting MOD discs from the Warner Archives since March 2009 and NEVER had a MOD disc go bad on me. However, I've had pressed discs like Reflections In A Golden Eye (1967), The Great Ziegfeld (1936), Rich And Famous (1981), Madame Bovary (1949), Eyes Wide Shut (1999), Roberta (1935), Shoot The Moon (1982) to name a handful stop playing after a few years.

Guess what? Your car won't last forever. Neither will your microwave, your blu ray player or your shoes. Why do you think your discs should?
Last edited: Oct 27, 2020

Because I have almost 100 year old 78rpm records that still play. Sure they can fail - but not just sitting on the shelf.

I *have* had MOD discs - commercial ones - fail right out of the package and it took almost an act of God to get them replaced (1 day past the 30 day "return window" - they were Universal MOD discs from TCM, an "exclusive" title, who has the worst CS on the planet - it took getting Universal involved to resolve and they had trouble understanding the situation thinking *they'd* sold the discs and were pressed). So far no Warner discs have failed but that single experience has made me gun shy.

BobO'Link said:
I *have* had MOD discs - commercial ones - fail right out of the package
Click to expand...

Oh, yes. I've had some MOD discs fail right out of the package too but not as many as pressed discs bad right out of the package. But I was not talking about discs that are "bad" when you buy them but discs that go "bad" after a period of several years. In that respect, I stand by my statement. I have not had a MOD disc go bad yet but I have had pressed discs go bad after several years.

Bottom line: there are no guarantees for either but no factual evidence that MODs have a larger propensity to fail than pressed discs over time.

Robert Crawford said:
Good luck with that as I see the studios and companies like Amazon continuing to burn discs due to their business models and convenience. From my perspective, I've had zero problems with burned discs.
Click to expand...

As far as i know Paramount is the only major studio burning Blu rays. Even WBA put out pressed Blu rays.
Good luck to you with your embracement of burned Blu Ray discs. I feel good about how i choose to spend my money.
You must log in or register to reply here.