“The direction is clear, the kicks are brutal, the backdrops are vivid,
and the gags land as hard as the body blows.” ~ INDIEWIRE 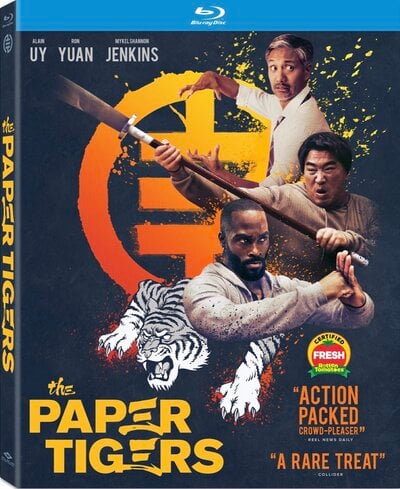 
PLANO, TEXAS (May 10, 2021) – Certified “Fresh” on Rotten Tomatoes and critically-acclaimed around the world, THE PAPER TIGERS, a homage to feel-good martial arts films like The Karate Kid, debuts on Blu-ray™ and DVD June 22from Well Go USA Entertainment. The audience-pleasing film shows how three dedicated kung fu disciples grew into washed-up, middle-aged men—now one kick away from pulling their hamstrings. But when their master is murdered, they must juggle their dead-end jobs, dad duties, and old grudges to avenge his death. The award-winning feature film debut of Director Tran Quoc Bao,
THE PAPER TIGERS stars Alain Uy (“Helstrom,” “True Detective”), Ron Yuan (Mulan, “Marco Polo”), and Mykel Shannon Jenkins (The Gods, Undisputed III: Redemption). The film is currently available to watch in theaters and on digital.

As teenagers, kung fu disciples Danny (Alain Uy), Hing (Ron Yuan) and Jim (Mykel Shannon Jenkins) were inseparable. Fast forward 25 years, and each has grown into a washed-up middle-aged man seemingly one kick away from pulling a hamstring—and not at all preoccupied with thoughts of martial arts or childhood best friends. But when their old master is murdered, the trio reunites, soon learning that avenging their sifu will require conquering old grudges (and a dangerous hitman still armed with ample knee cartilage) if they are to honorably defend his legacy.

THE PAPER TIGERS has a runtime of approximately 111 minutes and is rated PG-13 for some strong language, offensive slurs, and violence.