“If you are not already paying attention to the cast in this film, you need to.”
~ INSESSION FILM 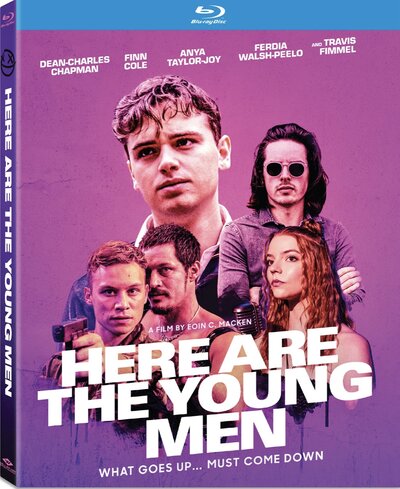 
HERE ARE THE YOUNG MEN


PLANO, TEXAS (May 11, 2021) – Based on the acclaimed novel by Rob Doyle and featuring a cast of rising young stars, the coming-of-age, social disobedience thrill ride HERE ARE THE YOUNG MEN debuts on Blu-ray™ and DVDJune 29 from Well Go USA Entertainment. The film follows a group of disenfranchised Dublin teenagers who fall into a social vacuum of drinking, drugs, and shocking acts of transgression after leaving school. Written and Directed by Eoin Macken (Cold, Dreaming of You), HERE ARE THE YOUNG MEN stars Dean-Charles Chapman (1917, “Game of Thrones”), Finn Cole (“Peaky Blinders,” Slaughterhouse Rulez), Anya Taylor-Joy (“The Queen’s Gambit,” The New Mutants, Emma), Ferdia Walsh-Peelo (“Vikings”), Travis Fimmel (“Vikings,” Warcraft) and Conleth Hill (“Game of Thrones”).

HERE ARE THE YOUNG MEN, based on the acclaimed novel by Rob Doyle, catalogs the last hurrah of three high school graduates intent on celebrating their newfound freedom with an epic, debaucherous bender. However, when a horrible accident sends them spiraling, the trio must grapple with the most daunting challenge of their lives: facing their own inner demons.

HERE ARE THE YOUNG MEN has a runtime of approximately 96 minutes and is not rated.