“Sakaguchi proves for the umpteenth time that he is
one of the greatest contemporary action stars."” ~ ASIAN MOVIE PULSE 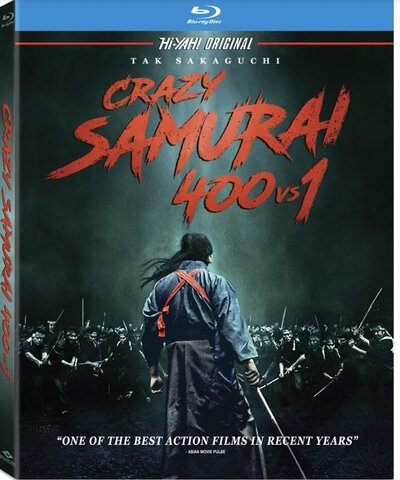 
PLANO, TEXAS (January 11, 2021) – Leading Japanese martial arts icon Tak Sakaguchi (Versus, Rise of the Machine Girl) stars in the groundbreakingly innovative action epic CRAZY SAMURAI: 400 vs. 1, which will debut exclusively on the martial arts streaming service Hi-YAH! on February 12, before hitting Digital, Blu-ray™ and DVD March 2 from Well Go USA Entertainment. The highlight of this extraordinary film is a 77-minute action sequence shot in one continuous take, a “marathon battle [that] rivals any ever filmed” (Forbes). Director Yuji Shimomura (Death Trance, Re: Born) has crafted an epic achievement in action choreography around Sakaguchi, who plays Japan’s most legendary swordsman—Miyamoto Musashi (1584-1645), a warrior undefeated in at least 60 documented duels—as he takes on his most difficult battle.

Synopsis:
When a master samurai arrives to duel the disgraced Yoshioka dojo, he walks into an ambush. In the world’s first 77-minute, one-take action film sequence, Miyamoto Musashi (Tak Sakaguchi) fights for his life against 400 warriors, earning a place in history as the CRAZY SAMURAI MUSASHI.

CRAZY SAMURAI: 400 vs. 1 has a runtime of approximately 92 minutes and is not rated.